With federal legislation continuing to prove elusive, California in September joined a growing number of states and cities that require employers to provide paid sick time off for their workers. 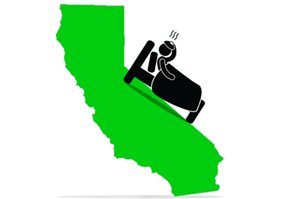 The California law, the Healthy Workplaces, Healthy Families Act of 2014, requires large and small employers to provide at least three days paid sick leave annually to employees who work 30 or more days a year. The leave would be available if they or a family member becomes ill. When it takes effect in July, it’s expected to affect 6.5 million workers.

Other locations that require paid sick leave include Connecticut as well as San Francisco, Washington, D.C., Seattle, New York City, Portland, Ore., and Newark, N.J., according to the National Partnership for Women and Families.

“We’re the only economically developed country in the world that doesn’t have paid sick days,” she says.

Nearly 4 in 10 private sector workers lack paid sick leave, and low-wage workers make up a disproportionate share. According to the Bureau of Labor Statistics’ 2014 National Compensation Survey, only 30 percent of the workers whose earnings are in the bottom quarter nationally had access to paid sick time compared with 84 percent of workers in the highest quartile.

The problem hits women especially hard. Women make up two-thirds of low-wage workers and are more likely to be the family caregivers, says Liz Watson, senior counsel at the National Women’s Law Center and director of its Workplace Justice for Women.

“Their ability to take paid sick leave or paid medical leave is crucial to being able to hold onto their jobs,” Watson says.

Federal legislation that would require paid sick leave has been introduced several times but never passed. The Healthy Families Act, introduced by Rep. Rosa Delauro, D-Conn., in 2013, would allow workers at companies with at least 15 employees to accrue up to seven days paid sick leave annually.

Noting that it took many attempts to pass the Family and Medical Leave Act, which allows workers up to 12 weeks of unpaid leave to care for their own or a family member’s medical needs, Watson says, “I think we will see this legislation pass, it’s just a matter of time.”