It’s been a tumultuous presidential campaign, with the outcome billed as a “change” election and health care high on the to-do list. On the state level, voters’ decisions on a slew of state ballot initiatives add this focus with action on a range of hot-button health care issues — from efforts to control drug costs and expand access to care to a variety of public health measures.

In California, voters waded into a national debate on drug pricing. Early Monday morning, with more than 97 percent of the vote reported, a measure to limit what the state will pay for prescription drugs appeared headed for defeat. Meanwhile, Colorado rejected an initiative to build a statewide single-payer health care system — a notable defeat for a policy proposal championed by politicians such as former Democratic presidential candidate and Vermont Sen. Bernie Sanders. It also became the sixth state to allow terminally ill patients to receive medication that would end their lives.

Here’s a breakdown of what last night’s ballot races did for health care access and health policy.

California looks like it rejected a measure that would cap prescription drug pricing. Now what? 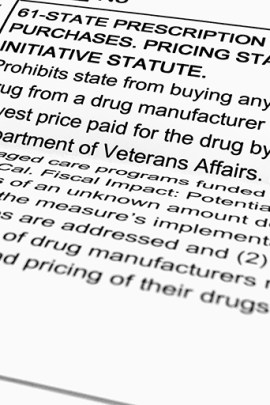 In a victory for pharmaceutical companies, the initiative known as Proposition 61, is projected to lose, with 54 percent voting against it. It would have barred state agencies from spending any more on prescription drugs than the U.S. Department of Veterans Affairs, which requires at least a 24 percent discount on pharmaceuticals.

The measure would have applied to the fee-for-service component of California’s Medicaid program, which is known as Medi-Cal and covers low-income people, along with state-funded pensions and the prison system, which pays for inmates’ medications. About one-fifth of Medi-Cal enrollees are enrolled in fee-for-service plans.

But this isn’t the end. Though Californians turned against the bill — which was originally expected to win, but drew heated opposition from drug manufacturers — a similar measure is expected to come up for a vote in Ohio next year.

That could get controversial. Experts had said Prop. 61, a response to a national outcry over high drug prices, didn’t give California the tools to enforce any price limit.

For one thing, the VA uses a formulary to determine which drugs it covers and can require doctors and patients to try some medications before others. That gives the agency more room to negotiate price with manufacturers, noted Walid Gellad, director of the Center for Pharmaceutical Policy and Prescribing at the University of Pittsburgh. Medi-Cal doesn’t have that flexibility. It can set a list of preferred drugs, but the federal government determines which drugs it covers.

Effectively, that means the program has to pay for most drugs approved by the federal Food and Drug Administration, said Rachel Sachs, an associate professor of law at Washington University in St. Louis, who studies drug pricing.

“You have to be able to demand the price,” Sachs said. “It’s not clear to me that they would have the ability to demand whatever presumably lower price the VA is getting.”

And while some of the VA’s drug prices are public, not all are, experts noted — a barrier that makes it much harder to actually enforce measures like Prop. 61.

“As much as you have to understand why people are upset, it’s not as simple as it may seem,” Gellad said. “Sometimes you want to punch someone because you’re so mad. … People want to sock it to [pharmaceutical companies], but it may not do anything in the end for them.”

Colorado’s Amendment 69 would have largely replaced the existing private or employer-provided health coverage in the state with a single-payer model that would coexist with other forms of government insurance such as Medicare. But voters rejected it resoundingly, with 80 percent voting against it.

The initiative had attracted widespread — and well-funded — opposition, and never received backing from Colorado’s Democratic or Republican establishment. It would have been funded by a 10 percent payroll tax that would garner an estimated $25 billion, but independent analysis suggested that amount wouldn’t be enough to cover operating expenses. The program was projected to have a $38 billion budget in its first year, overshadowing the state’s by 40 percent.

Amendment 69 follows another failed attempt to establish a state-based single-payer system — Vermont tried, too, but abandoned its plan in 2014, citing cost.

Amendment 69’s defeat makes single-payer through a state referendum less likely, said Gerard Anderson, a professor at Johns Hopkins Bloomberg School of Public Health, who has studied international health systems. He thinks future attempts at health reform might focus on something like a government-funded public option.

“What states are learning is that the financing for single-payer is just exceedingly difficult,” Anderson said. “Single-payer would be cheaper in the long run, but it means a tax increase, and tax increases are a no-no these days.”

But the national movement to let terminally ill patients end their lives got a boost from the same state.

Colorado voters approved Proposition 106, which allows people with a prognosis of death within six months now have the option to seek a prescription for life-ending medication. Two doctors have to assess the patient, and only legal adults are eligible for the self-administered drugs.

The law elicited backlash from the Catholic Church and some disability rights advocates. Colorado now joins states such as Oregon, Washington, Vermont and California with such laws. Washington D.C. is also weighing such a measure.

Californians appear to have rejected a controversial measure to require actors in pornographic films wear condoms during sex scenes. They voted to boost taxes on cigarettes, which is expected to provide funds to boost what Medi-Cal pays doctors.

California voters also moved to strengthen Medi-Cal, making permanent a tax on hospitals that helps fund the program and extended a tax hike for people making more than $250,000 per year, of which up to $2 billion could go to support health programs including Medi-Cal in some years.

In Washington, voters also weighed in on health care finance: They showed their opposition for a move by the state legislature to tax insurance companies that sell stand-alone dental plans on the state’s health insurance marketplace. The tax, which is similar to those levied on other health plans, helps pay for Washington’s insurance exchange.

Meanwhile, with 98 percent reporting, Montana voters were expected to reject a measure that would have allowed the state to sell $200 million worth of bonds to fund research on brain diseases. In Nevada, an initiative to give durable medical equipment — such as oxygen machines and wheelchairs — tax exemption passed with strong vote approval.

Finally, voters across the country weighed in on legalizing marijuana — for both medical and recreational use.

Arkansas, Florida and North Dakota will allow the drug for patients with demonstrated medical needs; a measure in Montana to loosen restrictions on how doctors provide marijuana also received voter approval.

Massachusetts, California and Nevada will move to allow recreational use of marijuana. Maine was still too close to call, and a similar ballot initiative in Arizona failed to garner voter approval.

Updated, 3:50 PM to list the states with aid-in-dying laws.