Jennifer Guintini was 23 when her teeth started falling out.

A habit of sipping on Mountain Dew all day − and later, a seven-year addiction to methamphetamine − caused her teeth to rot away. 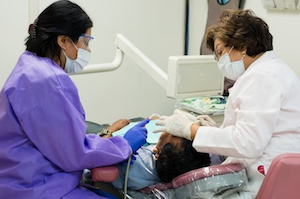 “Any time I ate or drank anything, it would be a stabbing pain,” recalls Guintini, an unemployed gas station worker.

Without insurance or the means to pay, she was never able to find a dentist near her Eureka home willing and able to treat her. Ten years on, “my teeth are dead past the point of pain,” she says. “They’re just bits and pieces now.”

Across the state, many low-income California adults lack dental insurance or access to dental care, threatening their overall health, self-esteem and employability. Many end up with infected gums, decayed teeth and other complications that must be treated in emergency rooms — at considerable cost to the government.

California is trying to change that by increasing the number of low-income adults eligible for basic dental benefits. Still, these patients face significant challenges, including a shortage of dentists in many areas and restrictions on what is covered.

Last June, Governor Jerry Brown signed a bill to allow all adults on Medi-Cal back into its dental program, known as Denti-Cal. (Medi-Cal is California’s version of Medicaid, the state and federal health plan for the poor.) Most adults – with the exception of patients in long-term care and some pregnant women — had been cut out of the Denti-Cal program five years ago amid the Great Recession.

The renewed coverage includes some preventive and restorative procedures, including routine exams, X-rays, cleanings, crowns, and full dentures. But the state limits the circumstances under which procedures like extractions and root canals can be paid for and is not picking up the tab for partial dentures and implants, which had been covered five years ago.

An estimated 1.6 million adults already on Medi-Cal are expected to be covered by June 2015.

In addition, roughly 1.3 million more people will qualify for Denti-Cal in 2015 because of changes imposed under the federal Affordable Care Act. The act extended Medicaid to nearly all adults living at or below 138 percent of the federal poverty level –about $16,000 a year for a single person. Although the federal law does not mandate dental coverage for anyone but children, these adults are eligible for Denti-Cal under the law Brown signed in June.

The changes will bring the total number of people in the Denti-Cal program to about 10 million by June 2015, raising annual costs from $682 million to about $942 million, most of which will be paid by the federal government. 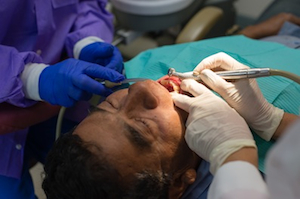 David Rivera, 55, needs to undergo several dental procedures to restore a healthy smile. The Los Angeles resident was uninsured for the past four years and waited to visit the dentist until he obtained medical coverage through his wife’s employer (Photo by Heidi de Marco/KHN).

The majority of states offer adult dental benefits through Medicaid, but California is one of just three planning to add to them, according to data from the Kaiser Family Foundation. (Kaiser Health News is an editorially independent program of the foundation.)

But with considerable pent-up demand and a shortage of dentists in many areas of the state, providers worry the changes will barely begin to solve the problem of access.

“They can hand out all the insurance they want, but there’s not enough providers, so it gives people a false sense of security,” says Darla Dale, a dental hygienist who treated Guintini as part of a free pilot program.

Almost half of California’s 31,600 licensed dentists are enrolled in Denti-Cal, said Andrew McCray, the chief of the Medi-Cal Dental Services Division, though many now gear their services to children. The state tries to recruit dentists in every county and to ensure there’s a provider within 25 miles, he said.

But some advocates say there is no guarantee providers who accept Denti-Cal will be willing to take on new patients.

And unfortunately for patients like Guintini, the state won’t pay for the major dental work she needs.

Her teeth have deteriorated so much they don’t hurt anymore, she said. In the absence of pain, the program won’t cover the 16 extractions she needs to get full dentures up top and partial dentures on bottom. Her father has offered to pick up the tab, she says.

She will, however, be eligible for routine preventive care through Medi-Cal.

That’s largely the goal — to bring patients “back up to a basic level of oral health,” said Andrew McCray, the chief of the Medi-Cal Dental Services Division. “That way, we hope we’ll be able to reduce costs of people seeking emergency care.” 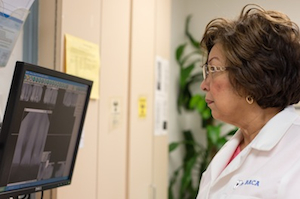 Dentist Norma Baca reviews a patient’s medical chart at her Los Angeles clinic. She has accepted Medi-Cal insurance since she opened her dental practice thirty years ago (Photo by Heidi de Marco/KHN).

Getting patients to seek timely and preventive care requires investing in patient education, said dentist Norma Baca, who for 30 years has operated a clinic in Los Angeles that caters to the local immigrant community.

“Eighty percent of my patients are Hispanic and the majority do not place a high importance to the well-being of their teeth,” she said. “We are just not educated about that in our native countries.”

According to the U.S. Centers for Disease Control and Prevention, tooth decay is among the most common chronic diseases in the country and is more prevalent in low-income communities. Poor oral health may contribute to or worsen conditions like cardiovascular disease and diabetes.

“It’s a crisis. I don’t think people realize how bad it is,” says Dale, who over the last 10 years has become used to seeing patients with missing teeth, severe gum disease, and advanced tooth decay.

For providers, the biggest roadblock seems to be low reimbursement rates. California has some of the lowest Medi-Cal rates in the country. And recently, the legislature enacted a 10 percent cut on Medi-Cal payments.

“I don’t know how they’re going to grow a network when they continue to cut their reimbursement,” says Dr. James Stephens, the president of the California Dental Association. “It’s hard to get people to do dentistry at a loss.”

Another barrier, providers say, is the unforgiving government bureaucracy. Stephens said he applied to serve Denti-Cal patients years ago, but the application kept bouncing back because of minor clerical errors. Eventually, he gave up.

Instead he opted to volunteer at the CDA’s free clinics, CDA Cares, and to do pro bono work. Other dentists and organizations are taking similar approaches.

“That’s not a health-care system, though. That’s just people trying to help folks out,” says Stephens. “What we need is a cogent plan.”

Stephens recently helped Monique, a 52-year-old woman from Pacifica get a partial implant for a front tooth she’d chipped about four years ago. Her dentist told her Medi-Cal would only pay to have it pulled, so she opted to keep the tooth. It rotted and eventually it had to be pulled anyway, she said.

“It was just embarrassing. You don’t want to be seen by anybody or anything,” said the unemployed job coach, who asked that her full name not be used.

She lived without a front tooth for about a year and half until she found Stephens, whose Palo Alto practice is about 30 miles from her home.

She’s grateful but still needs more dental work. Several of her teeth are chipped. The sharp edges cut at her tongue. At times, she has resorted to trying to shave them down with sandpaper.

Like Guintini, Monique will get back some dental benefits in May. But the program won’t cover the partial dentures she needs to make a good impression on potential employers.

Correction: A previous version of this story said Dr. James Stephens opted to organize the CDA Cares clinics. He helped as a volunteer, but was not the only person involved in the process. He provided his patient, Monique, with a partial denture, not an implant, as previously stated. The text has been amended to reflect the changes.

Dental Services Are Coming Back For California’s Low-Income Adults