When people think of seeing a doctor, generally the first thing that comes to mind is an office visit. But not all visits are the same. Frequently, patients have minor problems, which can be dispensed with quickly. Other problems are much more complex and require more of a doctor’s time and expertise. Not surprisingly, doctors get paid more for these more complex visits. Office visits for established patients are billed across five levels. 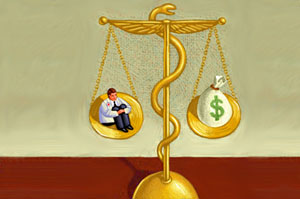 Three California doctors are among the top five nationally in billing for the most complex office visits, according to data released by Medicare and analyzed by ProPublica and KQED.

Most doctors’ billing patterns to the Medicare program fall in the middle ground between simple and complex.

In California, only 5 percent of doctors’ office visits for Medicare patients were billed at the highest level in 2012. It is unusual for doctors to determine — and bill — a large proportion of their office visits as complex.

The analysis of Medicare billing data — which was made public for the first time last month — shows that three California doctors are among the top five nationally in billing for the highest number of the most complex office visits. In addition, they tended to bill at the highest level significantly more frequently than peers in their specialty.

— In Orange County, Dr. Louis VanderMolen, a hematologist-oncologist, billed Medicare for 6,340 of these visits in 2012, the most of any doctor in the country and significantly more frequently than similar specialists nationwide. Almost 79 percent of his office visits were billed at the highest level, whereas other hematologist-oncologists only billed 12 percent of their office visits the same way.

— In the Santa Cruz County community of Freedom nearly every one of cardiologist Jeffrey Mace‘s patients received – and was charged for – the highest complexity visit. Mace billed Medicare for these high level visits almost 10 times more often than other cardiologists in California, and the third most in the country

— Cardiologist Jay Schapira ranks fifth in the country for the number of times he billed the most complex type of visit to his office in Los Angeles. His average patient received four of these visits in a year, compared to the one visit typical of other cardiologists in the state.

KQED conducted this analysis in conjunction with ProPublica, which published a national investigation last week. ProPublica also developed a “Treatment Tracker” tool, which allows consumers and journalists to look up a provider and see how often he or she bills at the highest level for office visits.

These billing patterns raise questions for Medicare as a whole and for individual patients who pay a percentage copay. The higher level visits cost more. “Twenty percent of $200, for example, is obviously more than 20 percent of $100,” said Christina Melnykovych, president of Coding Continuum and an expert in insurance billing. “There’s a direct correlation between the service level billed and the paid amount, and thus the copay impacts the patient.”

The Centers for Medicare and Medicaid Services, which runs Medicare, declined to comment for this story and in a statement said they have not seen the data analysis.

“Some providers have sicker patients, thus are more likely to bill at [evaluation and management] coding levels that carry higher payments. Every day we work with providers to make patient care the priority, and at the same time ensure they use [evaluation and management] codes that reflect the level of service provided,” the agency said. “It’s our assessment that it would be highly unusual for a provider to knowingly use the highest (level) code … for all or nearly all of his or her outpatient visits.”

Only one percent of California doctors billed Medicare at the highest level for all of their office visits for their established patients.

Coding experts stress that while the numbers cited for the doctors above do not by themselves indicate wrongdoing, they do raise eyebrows.

‘I’m Not An Average Cardiologist’

We tried to reach all of the doctors named in this report, with repeated phone calls plus faxes detailing our questions. Drs. VanderMolen and Schapira did not respond to our requests.

Dr. Mace sent us a written statement in which he vigorously defended his billing patterns. “I’m not an average cardiologist,” he wrote. “I spend a great deal of time taking care of patients. I generally spend 12-16 hours per day in the practice of medicine. I do not take any lunch breaks. I am on call 24 hours a day, seven days a week and do not take vacations. By being available and devoting a great deal of resources to the patients, I hope that this comprehensive care translates to improved quality of life for my patients and hopefully, improved quantity of life (longevity).”

In his statement, Mace said he had been “subject to several audits” over many years in regards to this level 5 billing code. He says that Medicare “has found all of the office visits reviewed to be correctly coded.”

While the established office visits are not based on time, per se, as a metric for coding, the American Medical Association assigns average time that would normally go along with different visit levels. For a level 5 visits, it’s 40 minutes, Melnykovych said.

If VanderMolen spent the average 40 minutes during all the 6,340 visits which he billed Medicare, that would mean he saw patients 16 hours a day — presuming he worked every weekday in 2012. Medicare paid VanderMolen nearly $750,000 for these level 5 visits in 2012. He was reimbursed another $1.6 million by Medicare for other services performed.

Overpayment can happen for many reasons, including simple error. “But that doesn’t preclude the federal government or any payer from coming to the (doctor) and getting their money back,” Melnykovych said.

Sometimes the excuse is legitimate. Blount said if a doctor is affiliated with a teaching hospital – Schapira is a professor at the school of medicine at UCLA – that could explain a higher volume of patients at higher level codes. In his statement, Mace said that he is “currently on staff at Stanford.”

A spokesman for Stanford Hospital and Clinics said in an email to KQED that Mace is an “independent community cardiologist who has ‘courtesy admitting’ privileges at Stanford Hospital & Clinics. Dr. Mace is not on Stanford’s faculty.”

VanderMolen’s website says that he “has had several university, hospital, and other appointments.” It does not indicate any current affiliations with any academic medical centers.

Problems can also arise from the billing set up at a doctor’s office. Many doctors don’t do their own billing, Blount says. They dictate their office notes from a visit or fill out a checklist, and then a clerk in the billing department enters a code.

He has also seen a rising trend in unintended coding errors that mirror the rise of the implementation of electronic medical record systems. Many of these systems include an automated coding function. A physician will type in medical observations and treatment protocols, and then an algorithm will determine the code.

“Those algorithms are subject to human error,” Blount says. “Some mistakes are being made by the electronic medical record vendors in how they designed the product that they’re selling.”

Still, according to Medicare rules, the ultimate responsibility for billing always rests with the doctor.

It’s not just the total number of visits that could raise red flags among auditors — repeat complex visits by individual patients could also be a cause for concern.

Dr. Gary Ordog is listed in Medicare’s billing database as an outpatient emergency medicine doctor in Newhall, a suburb of Los Angeles. Typically, this kind of physician sees patients at an outpatient urgent care center for any range of simple, non-urgent complaints, like sore throats, to more urgent matters, like a broken wrist.

According to KQED’s analysis, Ordog’s patients received – on average — 30 of the most complex office visits in 2012. The average for other emergency medicine doctors is 1 complex visit per patient.

This is not the first time questions have arisen around Ordog’s medical practices. In the mid-2000s, Ordog served numerous times as an expert medical witness in court cases arguing that mold in residential units and work environments made his patients severely ill.

The California Medical Board tried to revoke Ordog’s medical license in 2006 for “repeated negligent acts, incompetence, making false statements, and inadequate record keeping,” according to legal documents. He was put on probation and permitted to continue practicing medicine but prohibited from participating in any litigation. Ordog was found to have violated the terms of his probation by preparing reports for four patients in workers’ compensation claims. He signed a settlement agreement in September that extended his probation until March 2015.

Ordog did not respond to repeated requests for comment made via phone, fax, and to his attorney.

How We Did This

KQED partnered with ProPublica to analyze provider billing patterns for regular office visits for Medicare patients. ProPublica released its national report Thursday. We used data released in April by the Centers for Medicare and Medicaid Services showing the payments made to providers in Medicare’s Part B program in 2012.

KQED focused its analysis only on California providers who billed Medicare for at least 100 office visits for established patients in 2012.

Matt Levin and Brittany Patterson of KQED contributed to this report.

California Doctors Among Those Charging Medicare The Most For Office Visits

By Lisa Pickoff-White and Lisa Aliferis and April Dembosky May 21, 2014