RIVERSIDE, Calif. — When Jose Chavez Gonzalez moved to the United States from El Salvador, he took any job he could get — stocking warehouses, construction, cleaning houses and working in a meat processing plant.

But unlike most of the other immigrants he worked alongside, Chavez, 38, was a doctor with eight years of medical training. He came to the U.S. in the mid-1990’s to be with his family, but like all doctors from other countries, he still had to pass the U.S. medical boards and go through at least three years of residency in order to practice here. The process can be both expensive and time consuming, so during the day he worked various menial jobs and at night he studied for the boards.

“I had to do it. And I wouldn’t complain,” says Chavez. “It was OK to me. I mean, of course medicine is my passion, but since I didn’t have a license here, I couldn’t practice it.” 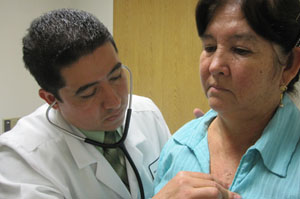 A quarter of U.S. doctors are foreign-born, mostly from countries like India that focus on training ­­medical students to work in the U.S.  Many other immigrant physicians never become American doctors, particularly those who come from Latin American countries like Chavez.

But a program at the University of California is seeking to change that, while at the same time helping to address the shortage of primary care doctors in the state. The UCLA International Medical Graduate Program offers Latino doctors a stipend along with board preparation classes, mentorship and references to help them find a good residency slot in primary care. In return, the doctors pledge to work in an underserved area of California for two or three years.

The program at UCLA was founded by Dr. Patrick Dowling and Dr. Michelle Bholat to help address the shortage of primary care doctors in the state, and a particular shortage of doctors of Latin American heritage. Though about 40 percent of the state’s population is Hispanic, only 5 percent of its doctors are.

Click below to listen to the story on NPR:

Nearly half of the estimated 5 million Californians expected to be newly eligible for health insurance under the Affordable Care Act are Latino, and Dowling says it’s key that patients see a doctor who understands their language and culture.

“You can either do total body cat scans on everybody or you can sit down and try to understand what the patient is saying and why and what’s going on in their life,” says Dowling.

The program is small. But slowly, it’s making a dent.  Chavez was able to pass his medical exams in two years. Today, he’s hard at work as a first-year resident at the Riverside County Regional Medical Center. Most of his patients are Hispanic, and many are immigrants like him.

Graciela Jauregui came to the clinic with severe pain in her knee. She was born in Mexico but has lived in the U.S. for 17 years, working as a housekeeper. She’s 62 and doesn’t speak English. She says she always prefers to see a doctor who can actually understand her.

Speaking through an interpreter, Jauregui says, “All doctors are good people, but when they speak Spanish it’s better.”

Chavez’s fluency in Spanish is prized by his boss, Riverside’s chief of family medicine Dr. Geoffrey Leung. Leung says the clinic employs translators, but they are often in short supply. And even with a translator, important details can be lost. 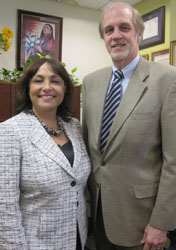 “No matter how good of a translator you have, your concern is that you may lose some part of the integrity of the message,” Leung says.

So far, the UCLA program has placed 54 Hispanic doctors into family medicine training programs – Dowling says that’s almost as many as came from all 10 California medical schools put together.

Dowling says hundreds and maybe thousands of immigrant doctors from Latin America could be practicing, but are instead working other – often menial – jobs. And that’s a wasted resource.

“I was just reviewing an applicant this morning who’s currently working in McDonalds,” Dowling says. “And I thought of the irony: She’s serving people Big Macs right now and what she could be doing is explaining to people that isn’t what you want you want to be eating.”

Chavez, for his part, is happy to be treating patients again: “[It] gave me the opportunity to stop working and focus full-time on studying. Without the program, I would still be working on construction.”