California is coming face to face with the reality of one of its biggest Obamacare successes: the explosion in Medi-Cal enrollment. 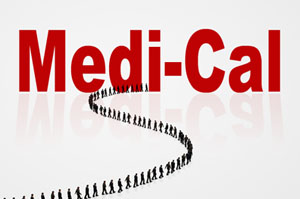 That has pushed the public insurance program into the spotlight, after nearly 50 years as a quiet mainstay of the state’s health care system, and it has raised concerns about California’s ability to meet the increased demand for health care.

Even as sign-ups continue, state health officials are struggling to figure out how to serve a staggering number of Medi-Cal beneficiaries while also improving their health and keeping costs down. Many are chronically ill and have gone without insurance or regular care for years, and some new enrollees have higher expectations than in the past.

Medi-Cal is the largest version of the nation’s Medicaid program for low-income and disabled people. Created as an anti-poverty program in 1965, Medicaid for years primarily served families, seniors and people with disabilities. Now, in the states that chose to expand their programs, the coverage is available to single adults without children and to those who make slightly higher incomes.

Real questions remain, however, about whether California is up to the task of covering so many more people and about whether it has the health care infrastructure to handle the needs of the new enrollees. The costs to the state will be significant.

Under the Affordable Care Act, the federal government pays 100 percent of the costs for newly eligible Medi-Cal enrollees for the first three years. But the state is responsible for 50 percent of the costs for those who qualified for the program before the Obamacare expansion, even if they hadn’t previously enrolled. Publicity and outreach about the health care law brought hundreds of thousands of people forward who were previously eligible but hadn’t signed up.

Gov. Jerry Brown said the higher-than-expected number of enrollees will cost the state an additional $1.2 billion this year, bringing the state’s total share of the costs for the program to $17 billion a year.

In some ways, the state is building on a thin foundation. California pays less per beneficiary than almost any other state, and its compensation to doctors is among the lowest in the nation. Brown won a legal fight to make additional cuts to doctors, pharmacists and other providers, and he has refused recent pleas to restore the funds.

That may help control costs, but it also makes finding health care more difficult for Medi-Cal recipients, since many health-care providers won’t accept them as patients. Despite efforts to boost the number of primary-care providers and to stretch the reach of specialists in the Medi-Cal program, there are areas of the state in which patients have little or no access.

With payments of $18 to $24 a visit, “doctors can’t continue to accept new patients and keep their doors open,” said Molly Weedn, a spokeswoman for the California Medical Association. Without enough doctors, Medi-Cal patients could continue landing in costly emergency rooms — the opposite of Obamacare’s aims.

Another problem rests with the state bureaucracy. California has an application backlog of about 490,000 people, which underscores the need to modernize and streamline the technology used for enrollment. The state is making progress in reducing the number of people waiting, but consumer advocates recently asked the federal government for help.

“As a result of the continued technical problems … the Medi-Cal system is failing on several levels,” a coalition of advocates wrote in a letter to the federal Centers for Medicare & Medicaid Services.

Meanwhile, many applicants have received no information about the status of their applications. Dylan Roby, an assistant professor at the UCLA Fielding School of Public Health, said that the state needs to improve its customer service.

With nearly a third of the state now enrolled in Medi-Cal, the political stakes are higher, and the state will increasingly face pressure to make the program more efficient and less burdensome.

Over the last several years, California has increasingly transferred responsibility for coordinating the care of Medi-Cal patients to managed-care companies, which get paid a fixed amount per patient to provide comprehensive care. The plans cover 70 percent of the Medi-Cal population, which helps keep the state’s costs predictable.

But the expansion has come so quickly that advocates are concerned about whether the state is adequately monitoring the companies to ensure they are providing high-quality care and timely access to services. Initiatives to track access are underway, and Democratic state Sen. Ed Hernandez has proposed a bill that would require the state to conduct annual reviews of managed-care plans.

Medi-Cal managed care hasn’t always received high marks. One evaluation last year by the California HealthCare Foundation showed that California ranked below the national average on “consumer experience” — such as communication with doctors and getting treatment quickly — although the quality of care was generally on par with the nation.

Another foundation report recently warned that oversight needs to be strengthened to ensure that patients don’t suffer as “dramatic changes” to Medi-Cal unfold.

California has already demonstrated to the rest of the country that it can dramatically cut its rate of uninsured, largely by increasing the size of Medi-Cal. Now it needs to show that its public insurance program can actually deliver the care its new enrollees are counting on.

The First Presidential Debate: A Night of Rapid-Fire Interruptions and Inaccuracies

Post-COVID Clinics Get Jump-Start From Patients With Lingering Illness

What We Know About the Airborne Spread of the Coronavirus