Skip to content
This story also ran on The Sacramento Bee. This story can be republished for free (details).

PETALUMA, Calif. — Late on the night of Sept. 27, a bumper-to-bumper caravan of fleeing cars, horse trailers, RVs and overstuffed pickup trucks snaked east on Highway 12, the flames of the Glass Fire glowing orange in their rearview mirrors.

With her cat, Bodhi, in his carrier in the back seat, 80-year-old Diana Dimas, who doesn’t see well at night, kept her eyes glued to the rear lights of her neighbor’s Toyota. She and Magdalena Mulay had met a few years before at a bingo night in their sprawling retirement community on the outskirts of Santa Rosa. Both Libras, each with two marriages behind her, the two women soon became the sort of friends who finish each other’s sentences.

Now, for the second time in three years, they heard the alarms and fled together as fire consumed the golden hills of Northern California’s wine country.

“I thought, where on earth are we going to go?” recalled Dimas. She remembered that when the catastrophic Tubbs Fire hit back in 2017, people had sought refuge outside well-lit supermarkets, which had water and bathrooms. Which is how Dimas and Mulay and dozens of other seniors ended up spending the night of the most recent evacuation in the parking lot of the Sonoma Safeway.

At midnight, Mulay was trying to get comfortable enough to catch a few winks in her driver’s seat when her phone began to chirp. A friend was calling to wish her a happy 74th birthday.

The stories of that Sunday night — as a 20-acre fire started that morning merged with two other fires to become an 11,000-acre conflagration forcing tens of thousands from their homes in two counties — spotlight the challenges of evacuating elderly and infirm residents from the deadly wildfires that have become an annual occurrence in California. This year, the coronavirus, which is especially dangerous to the elderly, has further complicated the problem.

While the 2020 fire season will go down as the state’s biggest on record, rescuers have so far managed to avoid horrors on the scale of three years ago, when the firestorm that raced through California’s wine country killed 45 people. Almost all were over 65 — found in wheelchairs, trapped in their garages, isolated and hard of hearing, or simply too stubborn to leave. The same grim pattern emerged from the Camp Fire, which leveled the Northern California town of Paradise in 2018.

Assisted care homes in particular came under scrutiny after the 2017 fire, when ill-equipped and untrained workers at two Santa Rosa facilities abandoned two dozen frail, elderly residents as the flames closed in, according to state investigators. They concluded the seniors would have died in the flames had emergency workers and relatives not arrived at the last minute to rescue them.

“The problem is we don’t value elders as a society,” said Debbie Toth, CEO of Choice in Aging, an advocacy group. “If children needed to be evacuated, we’d have a freaking Romper Room stood up overnight to entertain them so they wouldn’t be damaged by the experience.”

The destructive effects of climate change in California have dovetailed with a rapidly graying population — which in a decade is projected to include 8.6 million senior citizens. That has fueled a growing demand for senior housing, from assisted care homes to swanky “active adult” facilities complete with golf courses and pools.

Proximity to nature is a major selling point of Oakmont Village, Dimas and Mulay’s upscale community of nearly 5,000 over-55s, which has everything from bridge games to cannabis clubs. But the woodlands and vineyards surrounding this suburban sprawl have put thousands of elderly citizens in hazardous wildfire zones.

“With seniors, there’s mobility issues, hearing issues — even the sense of smell is often gone in the later years,” said Marrianne McBride, who heads Sonoma County’s Council on Aging. Getting out fast in an emergency is especially challenging for those who no longer drive. In Sunday’s evacuation, some residents who followed official advice to call ride services had to wait hours, until 3 or 4 a.m., for the overtaxed vans.

Dimas and Mulay managed to scramble into their cars and get on the road shortly after 10 p.m., when a mandatory evacuation order went out for the thousands of seniors in Oakmont Village. But it was after midnight when residents of two Santa Rosa assisted care homes in the evacuation zone were shuffled onto city buses in their bathrobes, some with the aid of walkers. Off-duty drivers braved thick smoke and falling embers to ferry some of them to safety, only to spend hours being sent from one shelter to another as evacuation sites filled up fast because of social distancing rules designed to prevent the spread of COVID-19.

Other precautions, including masks and temperature checks, were followed. But health officials nonetheless voiced concerns that vulnerable people in their 80s and 90s — especially residents of skilled nursing homes, the source of most of Sonoma County’s coronavirus deaths so far — had been moved among multiple locations, upping their chance for exposure.

In the following days, shelters were fielding frantic calls from out-of-town relatives searching for their loved ones. “We were getting phone calls from Michigan, other places across the country, saying, ‘I’m trying to find my mother!’” said Allison Keaney, CEO of the Sonoma-Marin Fairgrounds, which sheltered several hundred horses, chickens, goats and llamas as well as displaced people. 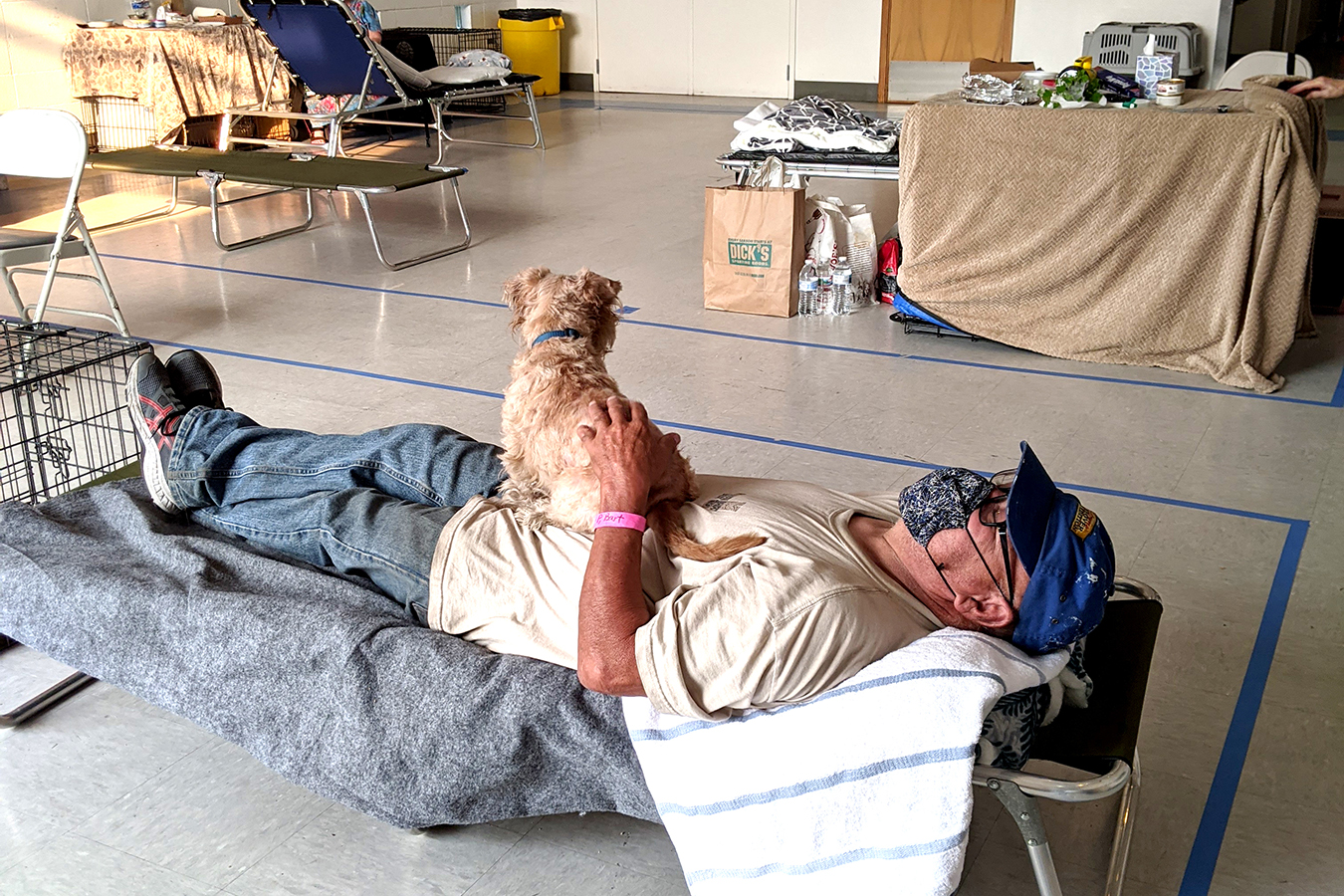 Bart Pettijohn rests on his cot with his dog, Clumsy, in an evacuation center at the Petaluma Veterans Memorial Building on Sept. 30. Volunteer health care workers and a veterinarian were among those who checked up on dozens of seniors and pets forced out of their homes during the biggest wildfire season in California history. (Rachel Scheier for KHN)

By Wednesday afternoon, a few dozen evacuees remained at the shelters, mostly seniors without relatives or friends nearby to take them in, like Dimas and Mulay. The two women had left the Safeway lot and were sleeping on folding cots in a gym at the Veterans Memorial Building in Petaluma, an old poultry industry town dotted with upscale subdivisions.

This was their first time out and around other people since March, when the two friends had been planning a big night out to see Il Volo, an Italian pop group. Seven months later, the new outfits they bought for the concert still hang unworn in their closets.

“All we do since the shutdown is stay home and talk on the phone,” said Mulay, who spoke to a reporter while sitting next to her friend on a folding chair outside the shelter. “Now, with all these crowds — it’s terrifying.”

Dimas likened the pandemic followed by the fires to “a ball rolling downhill, getting bigger and bigger. And then there we were, with the flashing lights all around us and the cops shouting, ‘Go this way!’ ‘Keep moving!’”

Listos California — an outreach program, for seniors and other vulnerable people, run out of the Governor’s Office of Emergency Services — allotted $50 million to engage dozens of nonprofits and community groups around the state to help warn and locate people during disasters. (Listos means “Ready” in Spanish.)

In Sonoma and Napa counties, where the Glass Fire had destroyed at least 630 structures by late last week, the bolstered threat of wildfires in recent years has promoted new alert systems — including a weather radio that has strobe lights for the deaf or can shake the bed to awaken you.

But while counties are legally responsible for alerting people and providing shelter for them once they’re out, no public agency is responsible for overseeing the evacuation. Practices differ widely from county to county, said Listos co-director Karen Baker.

If Sonoma County has learned anything from the disasters of the past few years, it’s not to depend too much on any system in an emergency. “You’ve got to have a neighborhood network,” McBride said. “As community members, we have to rely on each other when these things happen.”

Early last week, word filtered through the shelters that the fire had consumed a triplex and two single-family homes in the Oakmont neighborhood, but firefighters had battled the blaze through the night with hoses, shovels and chainsaws and miraculously managed to save the rest of the community.

A week later, to their relief, Oakmont’s senior residents were allowed to return home. By then, Mulay had developed severe back pain. Dimas missed her TV.

Back in her apartment with Bodhi, Dimas noted with horror that the blaze had come close enough to her building to incinerate several juniper bushes and scorch a redwood just 2 feet away.

“The whole thing feels surreal, like ‘Oh, my God, did that really happen, or did I dream it?’” she said.

As Californians Get Older and Less Mobile, Fires Get Hotter and Faster