This story is part of a partnership that includes Capital Public Radio,

As states work to comply with the federal health care law, many are designing their insurance exchanges, where people will be able to shop for coverage. 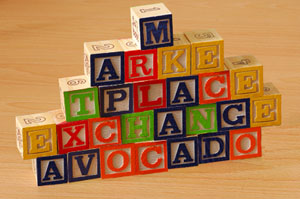 But just the word “exchange” sounds to many like off-putting government-speak, and some states are eager to come up with a more appealing name for these new marketplaces.

Peter Lee, who directs California’s Health Benefit Exchange, says it’s up for a new name, and he says they want it to sound fresh, dynamic and innovative.

The exchange will have a website where people can buy private health insurance, and many consumers will have government subsidies to help them purchase the insurance. Planners hope at least 3 million California customers will enroll for benefits starting in 2014. But that 3 million is a diverse bunch — so organizers want a name that will grab all of them.

“Almost half of the people that are going to be eligible for subsidized coverage in the exchange are Spanish-speaking,” Lee says. “But that’s not the only market. We have about 600,000 people that speak Asian-Pacific Islander languages. Some of them speak Mandarin; some speak Hmong.”

Lee and his team solicited names in California and got hundreds of suggestions. Among them: Avocado, Ursa, Eureka — names or concepts uniquely Californian. They tested them with focus groups.

The name Avocado got laughs but is now out of the running. Other names were borrowed from Spanish, like Calvida and Beneficia. They considered Healthifornia and Wellquest.

Claudia Caplan, a marketing expert with the RP3 Agency in Maryland, has done everything from naming fast-food hamburgers to marketing for a freight rail carrier. She says a name for a new health marketplace should have humanity but shouldn’t be too cute.

“This is a whole new world for people in terms of how they’re going to access insurance, and it might be wise to give them a name that makes them feel metaphorically wrapped in some nice, warm arms that are going to take care of them,” Caplan says.

Still, a name isn’t as important as what you build around it, she notes. “It’s going to be such a turnoff if you give it this great, nurturing name and it just turns out to be the DMV all over again,” Caplan says.

California’s exchange staff is sharing notes with counterparts in other states. Maryland just came up with its name and logo.

Dr. Joshua Sharfstein, Maryland’s Secretary of Health and Mental Hygeine and chairman of that state’s exchange, says they tossed around action names. “We had some that had verbs in them like ‘Cover Me Now Maryland,’ ‘Cover Insure Maryland,’ ‘Get Health Care Maryland,’ those sorts of things,” Sharfstein says.

He says one person even suggested “www.icantbelieveitsthiseasytobuyhealthinsurance.com.” But the Maryland planners went with something safe and trustworthy: Maryland Health Connection.

California is expected to release its new name and logo in November. The frontrunners? Eureka, a reference to the gold rush (and the state’s motto), and Ursa, which is Latin for bear and a symbol on California’s state flag. Condor is off the table. While uniquely Californian, it is a vulture that almost went extinct.

This story is part of a partnership that includes Capital Public Radio, NPR and Kaiser Heath News.