This story is part of a reporting partnership that includes Capital Public Radio,

Midday on a Monday outside the Primary Care Center on Broadway and Stockton Boulevard in Sacramento, patients linger outside, waiting for services.

Asked about their experiences at the clinic, they are eager to share – and many offer complaints.

Willie McGee says he waited six hours at the clinic, only to be scheduled to see a doctor for another day. Tanya Carrillo says she was sent by a hospital for follow up care, and was booked for an appointment more than three months out. Gledel Beacham picks up medication at the clinic, but says it’s easier to see a doctor elsewhere. 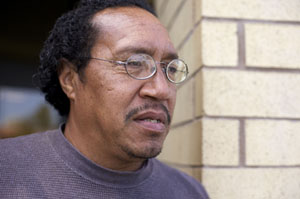 Gledel Beacham picks up medication at the Primary Care Center, but says it’s easier to see a doctor elsewhere (Photo by Andrew Nixon).

“Here, it’s like a circus,” he says about the only county-run health clinic in Sacramento.

Beacham says he has used county health services for years. When another clinic near Florin Road was open, he says he could see a doctor every week if he wanted to: “[It was] great because it was closest to me, I could walk in, it’s not so packed.” At Primary Care, he says, he’s seen a doctor one time in the past two years.

Sacramento County has closed all but one of its six clinics in recent years. But this month the county rolls out the Low Income Health Program, known as LIHP, with state support and an infusion of federal funds that officials hope will help provide better service. Sacramento will contract with Molina Healthcare to connect 12 existing, independent community clinics as a network. Still, Sacramento lags behind most of the rest of California in implementing LIHP, and it will be serving only the poorest of the poor in the county.

The LIHP program is expected to reach between 10,000 and 14,000 Sacramento County residents who don’t qualify for Medi-Cal, the state’s Medicaid program. It extends coverage to childless adults with an annual income of less than $7,500.

Stacey Wittorff has heard complaints about the current Sacramento county health program for years. She’s an attorney at Legal Services of Northern California. She says patients first have problems becoming eligible for services, and when they become eligible, there are often delays in care. Legal Services of Northern California recently filed suit against Sacramento County over eligibility.

“People are trying to…access services and they’re being told they have to wait months for specialty care or months for just a follow-up appointment for chronic conditions,” says Wittorff.

Getting Counties Ready For 2014

Last month, Sacramento County announced it was joining LIHP and California’s “Bridge to Reform” initiative, a state program which gives counties access to federal funds in advance of the Medicaid expansion called for in the federal health law in 2014. Almost all of California’s 58 counties have signed up and have enrolled 552,000 people in new coverage.

The LIHP brings new standards to county indigent health programs. Patients are guaranteed a doctor visit within 30 days of request, and doctors will have to be within 30 miles or 60 minutes away. The emphasis is on prevention, not services of last resort.

The county budgeted $53 million for LIHP during fiscal year 2012-2013, but numbers will be readjusted to account for the November start of services. Half of those dollars will come from the federal government.

“It is a huge, huge, undertaking,” Sandy Damiano, a deputy director with the Department of Health and Human Services for Sacramento County says. “We…did not have the appropriate infrastructure due to recurrent budget reductions or expertise to build a large infrastructure.”

Nevertheless, Damiano says the program is an exciting opportunity to transform the way the county currently provides services for its most needy residents.

“We’re hoping that [LIHP] can really get them stabilized in terms of their medical conditions and also decrease the hospital emergency room use,” says Damiano.

Some Counties Had A Running Start

In other counties, the LIHP program – and the people it serves – look quite different.

The San Francisco bay area county of Alameda is using federal funds to serve people up to 200 percent of federal poverty, or $22,340 for an individual. Alameda implemented the program beginning in July 2011.

But Alameda had a head start that helped, says County Health Director Alex Briscoe. It is one of 10 California counties that benefited from federal funds for a prior state project to improve local public health programs. That has allowed the county to be more proactive with low-income patients it serves.

“Now if you’re getting seen in one of our primary care clinics and you go to the emergency room three times in the same month, we call that primary care home and say, ‘Hey, what’s up? How come this person’s been to the ED three times and you haven’t seen them?’ We never did that previously,” Briscoe says.

The Alameda health budget also had the cash flow needed to bring in the federal dollars, and an infrastructure of community clinics to tap into.

Since the LIHP was implemented in Alameda, the county has been able to increase access to and decrease wait times for specialty care, he says.

There are other counties that have struggled to take advantage of the program – Santa Barbara County has not even announced an implementation date yet. Neither has Stanislaus, which will only offer new benefits to people at 50 percent of the federal poverty level. Merced and Tulare will join the state effort in January 2013. Merced, Fresno and San Luis Obispo counties will not participate.

Briscoe attributes the uneven roll out of the low income programs to a difference in county politics, investment in health, and administrative sophistication. To him, the geographic disparities in the LIHP program are cause for deep concern.

“Federal dollars will be left on the table that could have been brought to bear to mitigate the human suffering that is, frankly, everywhere,” Briscoe said.

For Most Needy, New Program Could Be A “Solution”

Back in Sacramento, Gledel Beacham struggles to find a place to sleep at night. Some nights, it’s on the streets. He finds his way to the Primary Care Center to pick up medication that helps manage his depression and keep pain from a back injury at bay. But the emergency room is a frequent place of care, he says, and seeing another doctor in Woodland is easier than trying to get an appointment at the county clinic.

Having more health clinics available to people like him “sounds like a solution,” he says. In Sacramento’s Low Income Health Program, he may have a medical home, at least, to call his own.

As California Prepares To Expand Medicaid, Only the Poorest Will Benefit In Sacramento