The powerful California Nurses Association has put Ebola on the bargaining table in its negotiations for a new contract with Kaiser Permanente.

Contract talks have been going on for months and the nurses’ most recent demands are all about Ebola — better training, more staffing, protective gear that goes beyond what’s recommended by federal officials and even a special life insurance policy.

“We’d like to have an extra supplemental coverage, for specifically Ebola, if we were to contract Ebola while we’re at work,” says Diane McClure, a nurse at Kaiser Permanente’s hospital in Sacramento, where a patient suspected of having Ebola was treated in August. He later tested negative for the virus. (KHN is not affiliated with Kaiser Permanente).

And, she says even a month after the Ebola scare at her hospital, nurses had not received any meaningful, hands-on training. 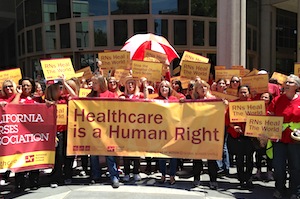 Members of the California Nurses Association rally in May in Sacramento (Photo by April Dembosky/KQED).

“They felt that all they had to do was pull up some [Centers for Disease Control and Prevention] information online and put some flyers on the tables and in the bathroom and that was it,” says McClure, who is a member of the nurses’ bargaining team.

Kaiser Permanente hasn’t responded to all of the California Nurses Association’s demands. In a statement, KP said that it is rolling out new training this week, including videos and simulation exercises. And it is supplying protective gear that is consistent with current CDC guidelines. KP insures 7.4 million people in California and operates healthcare facilities in 23 communities in the state.

Leaders from California’s union and its partner in lobbying, National Nurses United, are quick to label the problems with training as a symptom of the country’s fragmented health care system. The CDC issues guidelines, state departments of public health pass them on, then it’s up to each individual hospital to take it from there.

The unions say fragmentation, and a lack of protocols, are the reasons two nurses at Dallas’ Texas Health Presbyterian hospital were infected with Ebola. They’ve hosted several rallies for the nurses at the Dallas hospital, while noting that it is not unionized.

Joanne Spetz, an economics professor at the nursing school of the University of California San Francisco, says National Nurses United is doing what any other group that’s looking to gain membership would do.

“Of course it’s opportunistic,” says Spetz, but “Texas is a state that has had virtually no union representation for registered nurses. So NNU may view this as an opportunity to demonstrate to nurses in the state what the value of their representation might be.”