Troy and Alana Pack had spent the day at their neighborhood Halloween party in Danville. Ten-year-old Troy went as a baseball player, and 7-year-old Alana was a good witch. In the afternoon, they changed out of their costumes and set out for a walk with their mother. Destination: Baskin Robbins 31 Flavors.

“Alana, she liked anything with chocolate,” says their father, Bob Pack. “Troy, for sure, bubble gum ice cream, ’cause he liked counting the bubble gums that he would get.”

Bob Pack stayed home. His family made it only half a mile down the road before his phone rang: “I received a call from a neighbor screaming there’d been an accident. And I raced down there.”

An impaired driver had veered off the road and hit Troy and Alana head-on. Pack was doing CPR on Troy when the paramedics arrived.

“I remember telling them I love them, and hang on. Just praying that they could hang on,” he says

Troy and Alana were pronounced dead at the hospital. In the months after their death, Pack’s wife, Carmen, retreated into her Catholic faith. Bob Pack was angry.

“I think, for me to get through, I needed action,” he says, “and I needed to take action for justice for Troy and Alana, and also for doing something that I thought maybe I could change to benefit others in the future.” 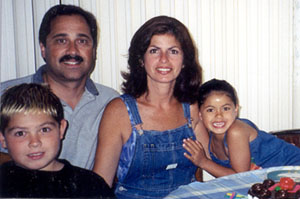 Bob and Carmen Pack with their children Troy and Alana, who were killed by an impaired driver. Bob has been pushing for California’s Prop 46 to be passed.

That was nearly 11 years ago. Pack quit his tech job to become an advocate. Over the last decade, he has helped write seven bills in California’s legislature. None of his efforts have been bigger than the one he’s working on for the November election: Proposition 46, the patient safety initiative. It’s complex and has three distinct proposals.

The first proposal, aimed at addressing “doctor shopping,” came about because investigators found the driver who killed his kids was abusing prescription narcotics.

“She had gone to numerous doctors, saying that she was under different pain — neck pain, back pain, leg pain, elbow pain,” Pack says. “They, in my view, recklessly wrote prescriptions for her, for thousands of pills.”

Pack set out to help the state build a database where doctors can see how many times a patient has been prescribed serious narcotics, like Vicodin or OxyContin. The result is the CURES database, or the Controlled Substance Utilization Review and Evaluation System.

Prop. 46 would make it mandatory for doctors to consult the database. California would become one of nine states requiring doctors to check before prescribing painkillers to first-time patients.

After passing similar laws, Tennessee and New York saw a significant reduction in the number of narcotics prescriptions written. Studies have verified the correlation, but acknowledge that drug abusers may be turning to street drugs, like heroin.

Many doctors in California like the database. Some have called it “indispensable.” But they don’t like being told how to practice medicine.

“The problem with the current way the ballot measure is written is it makes it mandatory, to have that database checked,” says Dr. Richard Thorp, president of the California Medical Association, adding technical glitches have made the database unreliable.

Doctors are also unhappy about another big piece of Prop. 46: the proposed change to the cap on “pain and suffering” awards in medical malpractice lawsuits.

After his kids died, Bob Pack wanted to sue the doctors who prescribed drugs to the driver.

“I set out and talked to about eight lawyers,” he says.

They all turned him down. They told him a 1975 state law limited the malpractice award he could get to $250,000. That meant puny attorneys’ fees. The case wouldn’t be worth the lawyers’ time.

“My reaction was ‘What?!’ That’s not democratic. That’s not America,” Pack says. “We all have the right to the court system.”

The law that set the cap is called MICRA, the Medical Injury Compensation Reform Act of 1975, passed with the intention of keeping medical liability insurance costs low. Several other states followed suit. California’s law caps only non-economic damages, or pain and suffering awards. Economic damages –- for medical expenses or lost wages –- are not capped.

But economic damages were no help for Pack. Children have no jobs, no lost wages. And his children, sadly, had no ongoing medical bills.

“So the victim gets victimized a second time,” Pack says, “they get no accountability or justice through the legal system.”

Some states have ruled such caps on pain and suffering awards unconstitutional.

Pack thinks California’s non-economic malpractice award should at least be adjusted for inflation. Prop. 46 would raise the cap from $250,000 to $1.1 million and provide an annual adjustment for inflation going forward.

But the CMA’s Richard Thorp sees a big problem. “That will encourage additional lawsuits in the system.” He argues more lawsuits will cause malpractice insurance premiums to go up, and those costs could drive doctors out of California.

“You’ll start to see it become more difficult to recruit doctors to California,” he says.

In a review of studies from the 1970s to the early 2000s, researchers writing for the Milbank Quarterly found that damage caps do reduce malpractice insurance premiums, with study results ranging from 6 to 25 percent.

A proposal to require drug and alcohol testing for doctors has been the centerpiece of the “Yes on Prop. 46″ campaign, inspiring campy ads of airline pilots and police officers dancing through the stalls of a public restroom.

Adding doctors to that list seemed like an easy sell. Early polls indicated voters strongly favored the idea -– many thought it was already law. In fact, if Prop. 46 passes, California would be the first state in the country to require drug testing of doctors.

Prop. 46 would give the Medical Board of California a year to set up a system to test doctors for drug and alcohol use, both randomly and within 12 hours after an unexpected patient death or serious injury at the hospital.

“This approach is too heavy-handed and too inappropriate,” says CMA’s Thorp. He says hospitals already have systems in place to suspend doctors who show up to work intoxicated.

The two campaigns have fought back and forth over just how much of a problem there is with impaired doctors. Regardless, Prop. 46 author Pack says, not enough is being done.

“The medical board has no authority and no mandate to be able to find out who these guys are, and weed them out or get them help,” he says.

But the focus groups revealing voter support for the idea of doctor drug testing were convincing. That has opponents calling the provision nothing more than a political gimmick.

“The only reason that was added to the proposition is because it polled well with voters,” says Thorp. “They’re just hiding the fact that they’re trying to increase the cap on non-economic damages so that the payouts to trial attorneys can increase.”

Doctors and insurance companies have amassed $57 million to fight Prop. 46, making this the most expensive campaign of the fall election. They’re outspending lawyers 10 to 1 on ads aimed at swaying voters toward a no vote. None of them even mentions doctor drug testing.

Early polls showed strong support for the measure – 58 percent. But that support is waning rapidly, dropping to 34 percent support in mid-September. Twenty-nine percent of voters said they hadn’t yet decided.