California regulators are proposing a strict limit on a toxic man-made chemical that has contaminated water supplies throughout the state, particularly in its vast agricultural heartland.

California would be only the second state, after Hawaii, to establish a threshold for the former pesticide ingredient and industrial solvent known as TCP (1,2,3-trichloropropane) in drinking water. The chemical compound, identified in California as a human carcinogen, is no longer in wide use but has leached over the years into many wells and reservoirs.

The problem extends well beyond California and Hawaii, environmental advocates say, but the chemical is not regulated by the federal government. Citing federal data, the Environmental Working Group, a Washington, D.C.-based advocacy organization, says the chemical also has been detected in water supplies of a dozen other states, including New York, Pennsylvania and New Jersey, as well as Puerto Rico.

Once TCP gets into the groundwater, it “persists for centuries,” according to the EWG’s April report.

The California State Water Resources Control Board’s proposal would set the maximum allowable amount of TCP in public tap water at five parts per trillion — the lowest level that existing filtration systems can reliably detect and far lower than Hawaii’s.

It “is a top priority for the state water board,” said board spokesman Andrew DiLuccia.

TCP taints water systems serving nearly a million people from Sacramento to San Diego, according to the state water board. The compound is present at levels above the proposed limit in 562 wells, reservoirs and other sources belonging to 94 public water systems, according to 2016 data. Those numbers do not include private wells. 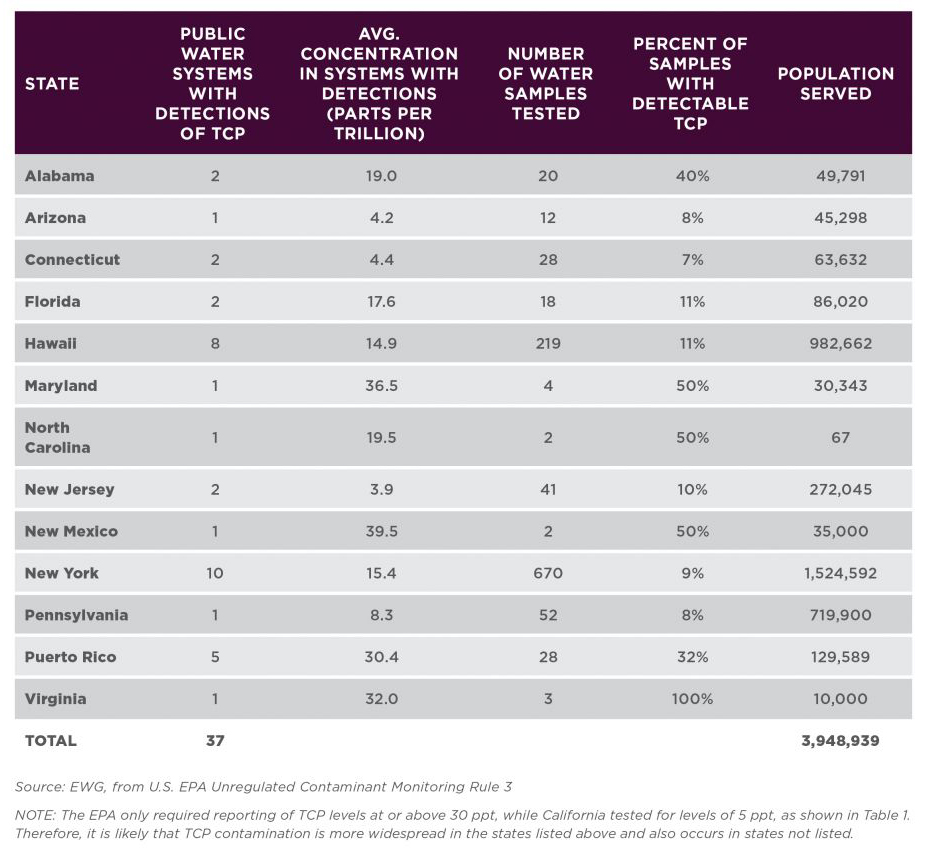 In California, the contamination exists in many urban areas, including in Los Angeles, San Bernardino and San Mateo counties. Though the source in those more populated regions is not known, the pollution is believed to come from industrial and hazardous waste sites.

“Los Angeles has quite a bit of contamination,” said Andria Ventura, toxics program manager for the environmental advocacy group Clean Water Action. “It’s hard for water providers to pinpoint where it came from.”

But California’s most serious and widespread TCP contamination is in the agricultural counties of the Central Valley, where the chemical was an ingredient in soil fumigants sold by the Shell Oil and Dow Chemical companies from at least the 1950s into the 1980s.

During that period, farmers who grew potatoes, sugar beets and other vegetables used the fumigants to kill tiny, soil-dwelling worms called nematodes. Dozens of municipalities and public water suppliers across the state have filed lawsuits against Shell and Dow, alleging that the companies knew — or should have known — that the TCP in their soil-fumigating pesticides would migrate into groundwater and pose a serious health hazard.

Shell and Dow have denied wrongdoing. Shell quit selling its product, known as D-D, in the mid-1980s. About the same time, Dow opted to reformulate its fumigant, known as Telone, after which TCP declined to “generally undetectable” levels, according to company spokesman Jarrod Erpelding. He declined to comment further, citing pending litigation.

Shell sent an email response: “The former Shell agricultural product, last manufactured more than 30 years ago, contained trace amounts of 1,2,3 trichloropropane (TCP). It was used to control microscopic worms that attacked crops causing millions of dollars a year of crop loss for farmers, and was approved for use by the U.S. government and the State of California.”

Environmental advocates say the adoption of a regulatory limit for TCP is a crucial step to help cash-strapped, rural water districts pay for the cleanup of their drinking water.

“It allows the districts when they go into court to be very specific and say to the judge, ‘We’re going to need exactly this amount of money to purchase this kind of system to meet the state standards,’” said Bill Walker, managing editor at the Environmental Working Group and co-author of its report on the role of Shell and Dow in California’s TCP drinking water problem.

“It doesn’t guarantee they’ll win,” he said, “but it increases their leverage.”

At a public hearing on April 19, water board members heard testimony and received written comments on the proposed limit. Now the board is reviewing the input it received and will likely vote on the plan by summer, DiLuccia said.

The regulation would require water utilities to test their supplies for TCP and remove it from any public drinking water source that exceeded the threshold, starting in 2018.

The proposed limit is more stringent than Hawaii’s because it is as close as California could get to meeting its stated “public health goal” for TCP set in 2009, officials say.

Though it is difficult to know how long the California cleanup might take, the cost of TCP testing and subsequent cleanup could reach nearly $500 million over 20 years, according to one water board estimate.

TCP contamination “disproportionately impacts poor communities and communities of color,” said Jenny Rempel, of Community Water Center, a Visalia, Calif.-based advocacy group. “This is a problem where the cost should not be borne by taxpayers.”

Todd E. Robins, a San Francisco attorney who is representing more than two dozen of the water suppliers that are suing Shell and Dow, argues that the companies included TCP in their worm-killing pesticides to get rid of the compound without having to pay for proper disposal. It was a byproduct of unrelated manufacturing processes and, according to the suits, played no role in killing the plant-damaging worms.

“The TCP that we find today in groundwater is the result of past use of soil fumigants that contained TCP as an unnecessary ingredient,” Robins said. “Instead of paying for disposal costs, they started getting farmers to pay for them.”

“The saddest part of the story,” Robins added, “is that the … actual active ingredient breaks down in the soil after a matter of days and has rarely been detected in anyone’s groundwater.”

One of the lawsuits filed by Robins, on behalf of the Del Rey Community Service District in Fresno County, says the companies knew they could remove or reduce the amount of TCP in their pesticides without compromising its effectiveness but failed to do so.

The complaint calls TCP a “hazardous waste” — a byproduct created in the manufacturing of a different chemical, allyl chloride, that Shell and Dow used to make plastics and other commercial products.

An internal Shell memo uncovered in Robins’ litigation cites $3.2 million in savings from “cost avoidance for disposal” related to the allyl chloride operations. The memo is dated Jan. 20, 1983 — a year before the company stopped producing the TCP-laced pesticide.

In addition to the pending cases, which also name distributors and marketers as defendants, Robins said he has settled eight cases against both Shell and Dow since 2010. He said he cannot disclose the amounts because of confidentiality agreements.

Last December, in a case tried by a different lawyer, a Fresno Superior Court jury awarded the city of Clovis $22 million against Shell to clean up its TCP-tainted drinking water.

In 2010, in a case brought by the city of Redlands, Shell won. The company argued that a nearby aerospace plant was the source of the toxin. Moreover, the wells in question were used for irrigation, and the jury didn’t believe they’d ever be used for drinking water.

As the lawsuits proceed, some California residents do what they can to protest the toxic chemicals in their water supply. Bartolo Chavez, 57, took time off his job in a juice packing house to testify at the recent hearing in Sacramento.

“We talk about the contaminants and the danger,” said Chavez, who has lived for 21 years in the Central Valley town of Arvin, Calif. “And [that] we’re exposed.”

He said he gets tokens from the water district to get free filtered water — not just because of TCP but because of other contaminants as well, such as arsenic and chromium-6.

“But the tokens aren’t enough,” Chavez said, speaking through a Spanish-language interpreter. “So in addition, we buy bottled water at Costco.”

Chavez and his wife, a hotel worker, pay about $50 a month for that water — a price they say they can ill afford. But leaving Arvin isn’t an option either, Chavez said.

“I have thought about moving, but it’s not so easy to find work in other places, especially when you’re older,” he said. “Our house is almost paid off, and to move would be to start over again, so it’s almost impossible.”