LOS ANGELES — Will Nebbitt lives on the 5th floor of a new downtown apartment building. From his window, he has a panoramic view of the Los Angeles skyline. He can also see Skid Row, where he spent decades sleeping on the ground.

Nebbitt, 58, says his body can’t handle life outside anymore. He has a seizure disorder, heart disease and depression. He’s had four operations, including bypass surgery on his leg in March.

“I am too old and sick to be back out there on the streets,” he said. “It kind of takes a toll on a person.”

Health officials handpicked him and about 100 other ill homeless residents to live in the Star Apartments, a sleek white building with a medical clinic on the bottom floor. The apartments are part of a multimillion dollar experiment: Using county health care dollars to house people who are chronically homeless. 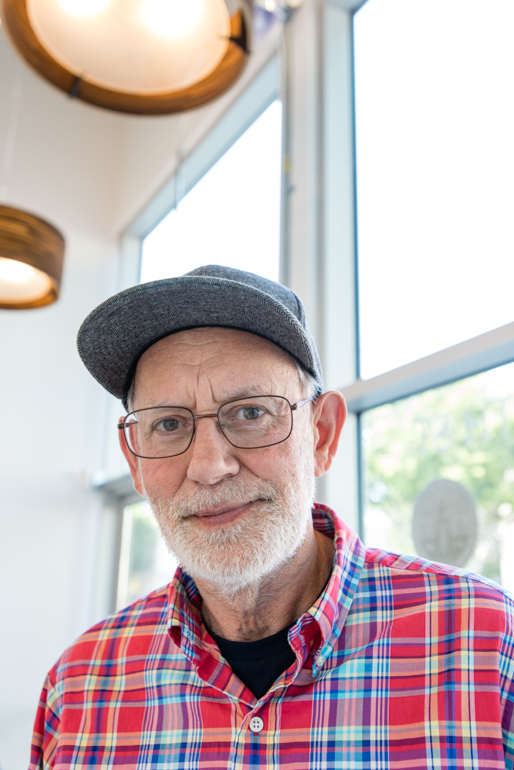 Michail Arlart, originally from Germany, was homeless for a few months before finding housing through the Skid Row Housing Trust. Arlart suffers from osteoporosis and visits the Star Clinic for abdominal pain on May 18, 2015. (Photo by Heidi de Marco/KHN).

“If we don’t, they tend to die young on the streets,” said Marc Trotz, director of the Housing for Health program in Los Angeles County, which officially began in 2012. “And they just continually recycle through expensive health care settings.”

Now, California wants to take the approach statewide. It is asking the federal government for permission to use Medicaid money to help put the most medically fragile homeless people in housing.

Mari Cantwell, deputy director of the state health care services department, said health care and housing traditionally have been in distinct silos. “We are really trying to look at the whole person,” she said. “And our belief is that this will improve health care and reduce costs.”

Selling the federal government on California’s idea won’t necessarily be easy. The Centers for Medicare and Medicaid Services turned down a request from New York to house chronically ill homeless patients, saying it isn’t in the business of paying rent. New York now pays for such housing with state Medicaid funds. Other states, including Massachusetts and Louisiana, are using federal dollars not for rent but for services that keep specific populations, such as those with severe mental illness, in housing.

California’s proposal could be the most comprehensive of its kind, allowing Medicaid to cover a broader population on a consistent basis. The federal money would pay for case managers to help people get whatever they need to stay in housing except for rent – including transportation, job assistance and substance abuse treatment. Any savings could be used by managed care companies to invest directly in providing housing, in partnership with local governments and others. California does not yet have estimates on how much federal money it might need.

Carol Wilkins, a consultant and author of a recent report on “supportive housing” for the U.S. Department of Health and Human Services, said counties don’t have the resources to continue doing these projects on their own.  Medicaid needs to step in and recognize housing-related services as health care costs, she said.

But critics say Medicaid money is limited and should only pay for health care. “Saying you want to provide housing benefits out of Medicaid money is in my mind a stretch,” said Lanhee Chen, a research fellow at Stanford University’s Hoover Institution. “I think we have to draw the line somewhere.”

Studies in several states, including Illinois and Oregon, have shown a reduction in emergency department use and length of hospital stays when homeless people move into housing. Research on the Los Angeles County program produced similar results. In one 2013 report, the Economic Roundtable found that total health care costs for homeless patients in supportive housing  were 72 percent lower per person  than for those still homeless.

Through case management, recruitment and rent subsidies, the Los Angeles County Department of Health Services is helping house 700 people at dozens of sites and it plans to serve 1,500 more over the next year. Still, that is a fraction of the estimated 12,000 chronically homeless people in the county, and Trotz said federal Medicaid dollars would allow him to expand further.

Getting away from the chaos and temptations of the streets and settling in an apartment enables people to begin recovering from whatever led them to become homeless at the start, Trotz said. “It is really difficult or impossible to do that while living on the streets.”

At the Star Apartments, owned by the Skid Row Housing Trust, residents meet regularly with case managers. They can attend depression support groups and diabetes classes, plant vegetables in a patio garden or play drums in a music jam session. The apartments aren’t fancy – just about 350-square feet, with basic furniture, a small kitchen and a bathroom. But residents like having a space of their own.

“I’m just thankful that I have a place to go home to,” said Michael Montana, as he waited for a regular blood pressure check at the on-site health clinic, run by the county.

Montana, 59, who has a raspy laugh and gets around in a wheelchair, moved into the Star Apartments after about eight years on the streets and multiple trips to the hospital. Though he suffers from chronic lung disease, diabetes and arthritis, Montana said he hasn’t been to the hospital once in the last year.

Since moving in in late 2013, Nebbitt said his health is better, too. Standing just over five feet tall and wearing red-rimmed glasses, Nebbitt said he spends his free time reading the Bible and watching Divorce Court in his room.

When he was living out of a tent, Nebbitt didn’t have a place to put medications. He couldn’t kick an addiction to crack cocaine. He also didn’t have a regular doctor.

Now, he said, “I can just take the elevator five stories down and I am at my doctor’s office,” he said. “I can’t beat that.”

On a recent morning, nurse practitioner Lynda Stack saw Nebbitt, ordered some blood work and checked the scars from his bypass surgery. She also went through his health history, dating to when he was a child and started having seizures.

“I tell my patients we’re gonna have a long-term relationship,” she told him.

“Well, I’m in it for the long haul,” Nebbitt responded, smiling.

The challenges are on full display just steps from the Star Apartments. As evening fell on a recent day, businesses began closing up and downtown’s hundreds of homeless returned to their spots, setting up tents and cardboard boxes.

A former construction worker from Orange County who became homeless just a few months earlier said he had cirrhosis of the liver. Another man with deep wrinkles and bright blue eyes said he’d had two heart attacks and worried about having a third if he didn’t get into an apartment soon. He’d been on the streets 10 years.

Nebbitt said he is glad not to have that life any more, and to be away from the danger and the cold.

“It’s my sanctuary,” he said of his apartment. “It’s like going from hell to heaven.”