SAN FRANCISCO — Americans have long stood out among residents of developed nations for how much they fret over, and are bankrupted by, health care costs. But well into the second year of expanded coverage under the Affordable Care Act, those worries have eased significantly in the nation’s most populous state.

A statewide survey has found that newly insured Californians no longer rank health care costs as their top financial concern. It has dropped below other essentials such as housing, utilities and gasoline.

“This was exactly the goal,” said Dr. Bob Kocher, a senior Obama White House official in 2009 and 2010 who helped draft the federal health care law. “Financial security was an enormous factor in our design.”

California has made swift gains in extending health coverage to its residents. It was one of just 15 states and the District of Columbia that opted for a state-based marketplace and expanded the publicly funded Medicaid program for low-income Americans.  Those moves have paid off: About two-thirds of Californians who were uninsured in 2013 now have health insurance, according to the survey by the Kaiser Family Foundation, which was released Thursday. (Kaiser Health News is an editorially independent program of the Foundation.)

Since the state’s insurance marketplace, Covered California, made its balky debut in October 2013, some 1.4 million people have bought private health coverage, most with federal subsidies. But the biggest driver by far in reducing the number of uninsured has been the state’s hearty embrace of the law’s Medicaid expansion. Of Californians who reported being uninsured in 2013, according to the survey, 34 percent  went on to enroll in Medicaid (known as Medi-Cal here). That has brought  the number of residents covered by the program to 11.9 million.

Prompted partly by a deluge of complaints from Medi-Cal  beneficiaries, a recent state audit found that the California Department of Health Care Services, the agency that administers the public insurance program, failed to guarantee that patients had adequate access to doctors, a requirement under state law. Physician directories were riddled with errors, the audit said, and phone representatives manning help-lines answered only a third to half of all calls.

Despite those failings, the Kaiser Family Foundation survey found the recently insured are largely satisfied with their coverage, including 83 percent of Medi-Cal  enrollees and 63 percent of Californians who purchased private plans on the Covered California exchange. One positive, according to the survey respondents, was that they are having an easier time getting medical attention.

“I finally had the colonoscopy,” said David Bishop, a 60-year old construction worker, who enrolled in Medi-Cal  after spending eight years without coverage. “The last time I had insurance, I had a wife and three kids, and you could make a house payment or truck payment for what insurance cost…[It] was so expensive we just did without.”

The survey also found a striking reduction in the percentage of recently insured Californians who struggled to pay medical bills: 23 percent said they faced difficulties, down from 45 percent in 2013.

“I’m paying one dollar a month,” said survey respondent Paul Marcus, a 62-year old physician assistant at a drug treatment center who signed up for a health plan through the state-run insurance exchange. The last time he went to buy health coverage, after losing his employer-based coverage in 2011, the $1,100 monthly premium was far more than he could afford.

Still, Marcus is cautious about using his medical insurance. “I think I’m on a bronze plan with a high deductible and high co-pay,” he said. “I’m still counting on trying to stay healthy.”

The survey found that the newly insured worry  far less than the one third of the state population who remain uninsured.  This group continues to rank health care costs as their number one financial challenge, according to the survey.

With its diverse population, the state struggled during the first year of sign ups to enroll its large Latino population. But a more concerted outreach effort, including through Spanish-language media, appears to be working. The Kaiser Family Foundation survey found previously uninsured whites and Latinos gained coverage at a similar rate: 79 percent of eligible whites became insured, as did 74 percent of Latinos.

Making health care more affordable was one of the law’s central promises. The law’s architects sought to shield low- to moderate-income households from punishing health care costs by limiting deductibles to $6,600 for an individual and $13,200 for a family plan in 2015 and providing federal subsidies. (Medicaid remains largely free to beneficiaries.) According to the Internal Revenue Service, 2.7 million American taxpayers claimed some $9 billion in subsidies; the average subsidy was $3,400.

And the growth in out-of-pocket spending is projected to have slowed from 3.2 percent in 2013 to 1.3 percent in 2014, according to the Office of the Actuary at the Centers for Medicare & Medicaid Services.

Although the law has eased the squeeze on wallets, a sizable number of Californians continue to report problems paying for and accessing health care.  Three in 10 said they faced unreasonable waits for an appointment and 16 percent said a doctor’s office had refused to take them as new patients. 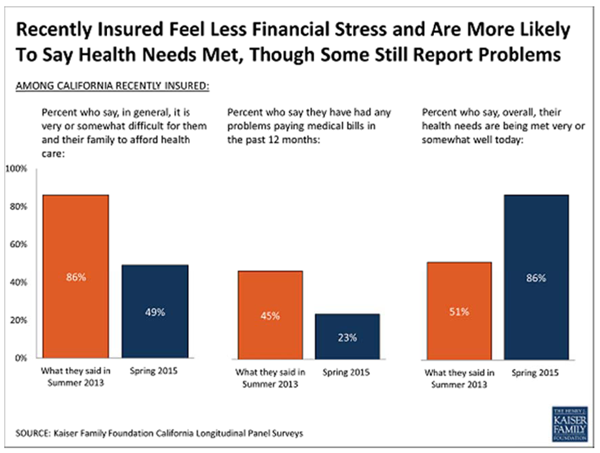