California’s experiment aimed at moving almost 500,000 low-income seniors and disabled people automatically into managed care has been rife with problems in its first six months, leading to widespread confusion, frustration and resistance.

Many beneficiaries have received stacks of paperwork they don’t understand. Some have been mistakenly shifted to the new insurance coverage or are unaware they were enrolled. And 44 percent of those targeted for enrollment through Oct. 1 opted out.

Harold Marshall, who has hypertension, bipolar disorder, chronic pain and bladder cancer, said he rejected the managed care program because one of his doctors said he wouldn’t see him anymore if he was enrolled. Marshall, who lives in Inglewood, gets most of his care at renowned hospitals —Cedars Sinai Medical Center and UCLA.

“If I didn’t have my doctors, I don’t know what would happen,” he said.

In fact, doctors have been among the most vocal critics of the switch, and the state admittedly is having trouble getting some of them to participate.

“The scope and the pace are too large and too rapid for what is supposed to be a demonstration project,” said Dr. William Averill, executive board member of the Los Angeles County Medical Association, which filed a lawsuit to block the project. “We are concerned that [the project] is ill-conceived, ill-designed and will jeopardize the health of many of the state’s most vulnerable population – the poor, the elderly and the disabled.”

There is a lot riding on the pilot — the largest of its kind in the nation. The patients involved are among the most expensive to treat – so-called “dual eligibles,” who receive both Medicare, the health insurance program for the elderly and disabled, and Medicaid, which provides coverage for the poor. Over the three years of the demonstration project, California is focusing on 456,000 of the state’s 1.1 million dual eligibles.

State officials acknowledge some transition problems but say the project will provide consumers with more coordinated care that improves their health, reduces their costs and helps keep them in their homes. In addition, officials estimate the program could save the state more than $300 million in fiscal year 2014-2015.

Until now, many of these patients have had to maneuver through two massive government bureaucracies, each with separate rules. Medicare pays for most doctor visits and hospitalizations, and Medicaid covers nursing and other long-term care.

The patients are more vulnerable than most Medicare beneficiaries, more likely to have Alzheimer’s, diabetes and mental health problems. Many see multiple doctors in different practices, sometimes receiving unnecessary medications or duplicative tests.

Under the project, patients are given a single health plan membership card and a case manager. Instead of paying doctors per visit, the government pays the managed care plan a set monthly rate to manage all of the patient’s needs, including in-home care and nursing home stays.

In most — but not all– counties, patients have a choice of plans. The pilot program’s enrollment is occurring on a rolling basis and now includes five counties – San Mateo, Los Angeles, San Bernardino, San Diego and Riverside. The program will begin in Santa Clara in January and Orange County this summer but will not move forward in Alameda County as originally planned.

“This is extremely exciting how we have broken down these silos of these two programs and are really focusing on how we can bring together and better integrate medical, behavioral and long-term care,” said Toby Douglas, director of the California Department of Health Care Services, which is implementing the program. As a result, people will “get care in the right setting at the right time, which is going to improve the experience and quality and outcomes and bend the cost curve.”

In practice, however, challenges abound.

“The state has not done a good job marketing the program,” said Aileen Harper, executive director of the Center for Health Care Rights, a nonprofit contracted by the state to answer beneficiaries’ questions and guide them through the process. “That is one of the reasons you have seen the pushback.”

Beneficiaries have been confused by the information packets from the state and the plans– which start arriving in the mail 90 days in advance. For instance, notices say people have “new choices” about coverage that will improve their care. But if patients or their authorized representatives don’t call or send in a form opting out, they are enrolled anyway.

Among more than 195,000 eligible beneficiaries as of Oct. 1, about 86,000 had opted out. State numbers released Saturday show the opt-out rate had declined to 33% as of Nov. 1. The drop is because Santa Clara residents have just begun to receive notices and only a small number have decided not to participate.

Some of the rules are surprising or mystifying to beneficiaries.

Tujunga resident Joyce Lest, 62, said she received a letter saying she now has to pay for part of her prescriptions but won’t receive an extra allocation for over-the-counter medications as she did before. 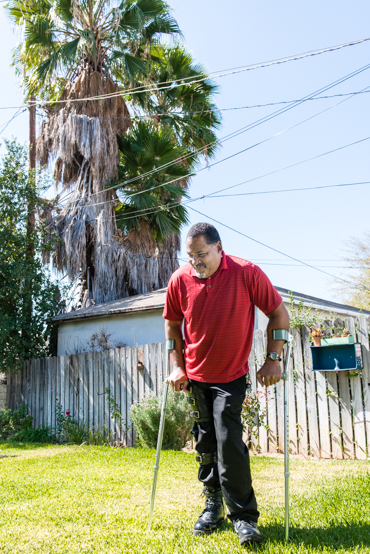 Michael Williams, 59, decided to opt out of the pilot program. Williams wears a custom leg brace to help him walk and is worried he would have to travel too far for treatment (Photo by Heidi de Marco/KHN).

“I signed up thinking they were going to help me,” said Lest, who has high blood pressure and advanced osteoarthritis. Instead, “they are taking things away from me.”

Michael Williams, a 59-year-old with cerebral palsy, said he has received several packets of information at his Altadena home, each more confusing than the last. The booklets didn’t make clear how his care would change or whether he could keep his pharmacist, physical therapist and the person who builds his leg braces, he said.

So Williams opted out, fearing he’d have to travel farther for medical care. “I’m not physically up to that,” he said. “I’m scared this is just going to turn into a big mess.”

Under the rules, people can ask for permission to continue to see their established providers for six months, then must switch to those in the managed care network. No concrete numbers are available on how many doctors are participating, although plans are required to demonstrate that they have sufficient networks of doctors.

The state has been besieged with questions. In September alone, there were nearly 50,000 calls to the state’s health care services department about the project.

Greg Knoll, executive director of the Legal Aid Society of San Diego that runs the state ombudsman office said: “The phones were ringing off the hook … The rollout has been rocky.”

The biggest issue, Knoll said, is the “disruption of care” – beneficiaries saying they have to reschedule appointments and surgeries because of the changes.

Douglas said the state is trying to address the problems quickly. Among other things, officials are expanding outreach and education, relying on a website www.calduals.org, virtual and telephonic town halls, a call center and partnerships with community groups.

Douglas said he thinks patients will be less likely to opt out when they learn more about the project and see others receiving better care.

Trying To Make It Work

Douglas said the resistance of some doctors is not surprising. Some fear their rates will be lower and others have had long experience being paid each time they treat a patient. The state is trying to get more information out to encourage greater participation, he said.

Patrick Johnston, chief executive officer of the California Association of Health Plans, said that while it is of concern that some physicians are not interested, health plans have still been able to build comprehensive networks of primary and specialty care providers for the tens of thousands of people already in the program, and they are continuing to expand those networks.

“The state decided to go big from the outset .. and now our job is to help make it work,” he said.

Inland Empire Health Plan, which covers the patients in Riverside and San Bernardino counties, has been working both to expand its network and contact providers so they won’t drop their patients, said CEO Bradley P. Gilbert. Gilbert said teams of physicians, pharmacists and behavioral health specialists working together can deliver better care. But, he said, “There are still a lot of doctors and members who aren’t sure what is really going on.”

The California project stems from the Affordable Care Act, which does not mandate managed care but promotes better integration of the Medicare and Medicaid programs. Managed care is nothing new to California, which already has extensive experience in both the public and private sectors – including in its regular Medi-Cal program.

Despite the early problems, Knoll of San Diego’s legal aid office said he is hopeful that the project will eventually result in better care for elderly and disabled people. “This is a very vulnerable population,” he said. “I believe this is the right thing to do.”