Ever since Nickfredy Gutierrez was born prematurely 12 years ago with hydrocephalus, a tube has drained fluid and relieved pressure from his brain. He has had several surgeries and sees his medical specialists every three months.

His mother, Mercedes Maldonado, says her son is alive today because of the medical care he gets at Los Angeles County Harbor-UCLA Medical Center through California Children’s Services, a little-known state program that pays for specialized medical care for children with severe illnesses or birth defects.

“For those of us with low incomes, we don’t know how we would do it,” she said. “The care is expensive.”

Beginning next year, state officials essentially want to fold the $2 billion program, which serves an estimated 180,000 children younger than 21, into its vast system of Medi-Cal managed care.

But families like Maldonado’s, along with children’s advocates and pediatric medical centers, are strenuously opposed. They say Medi-Cal managed care hasn’t worked well for vulnerable populations and is particularly risky for fragile kids whose lives depend on access to highly specialized care.

“It feels like our children are going to be dumped in to this system that doesn’t even seem to be working for healthier children,” said Kausha King of Concord, Calif., who has a son with cerebral palsy and works as a liaison for families of children with special needs.

Under the state’s proposal, about 31,000 children in as many as 25 counties would be moved into Medi-Cal managed care plans in 2017. The rest would follow beginning in 2019.

CCS pays a fee for each service provided, whereas Medi-Cal increasingly is switching to a managed care approach, in which medical services are coordinated and covered under a single health plan for a fixed monthly payment.

State officials say that children who see a variety of doctors, like those in CCS, can benefit from a system in which the “whole child” is treated by one plan. It is not about saving money, said California Department of Health Care Services director Jennifer Kent.

“This is an opportunity for us to try something different and to bring improvements to the program,” she said.

Kent said the department takes the program seriously and wouldn’t want to jeopardize it. Before transferring any children, she said, the state would make sure the health plans are ready and the department would continue to oversee and monitor the plans.

After considering feedback, the department can act on its own, without legislative approval, but officials say they nonetheless will seek to incorporate the changes in state law.

Nicole Kasabian Evans, a spokeswoman for the California Association of Health Plans, said plans are generally supportive of the state’s proposal but need to ensure that the rates are “adequate to cover the high-cost population.” Currently, CCS pays for care at higher rates than Medi-Cal. Evans said she believes the plans are well equipped to work with doctors who are certified by the state as CCS providers.

These critics point to a scathing report from the California State Auditor in June, which found that the state could not assure that its Medi-Cal managed care networks were adequate and that thousands of calls to an ombudsman’s office went unanswered every month. They also refer to a lawsuit pending in Los Angeles, alleging disabled people were denied crucial medications, tests and treatment by Medi-Cal managed care plans.

Pediatric hospitals are worried about losing the money that undergirds their entire system of expert care.

CCS has long provided for a regionalized system that goes beyond county boundaries, so children can see the doctors who are most expert in their child’s condition – regardless of where they are, said Ann-Louise Kuhns, president and CEO of the California Children’s Hospital Association. But if plans don’t allow the children to see those physicians, Kuhns said it could lead to the “de facto destruction” of the program. 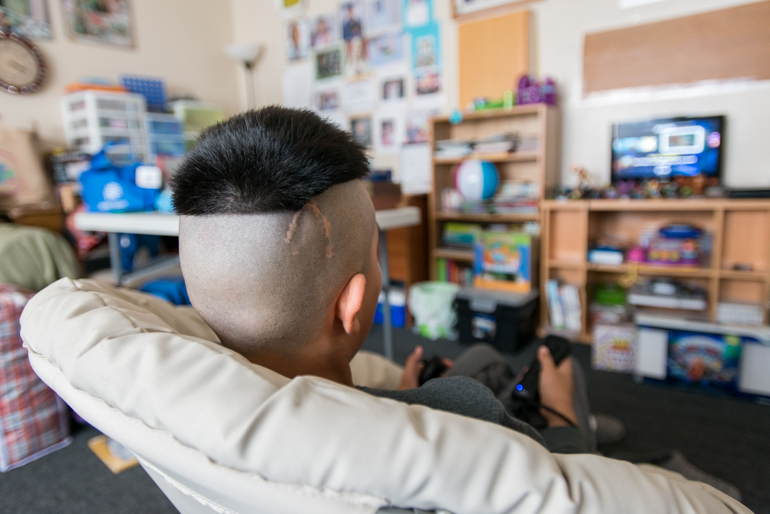 Nickfredy Gutierrez, 11, plays video games at his house in Los Angeles on Aug. 10, 2015. The ventricular shunt surgically implanted at birth left scars on his head and his stomach. (Photo by Heidi de Marco/KHN)

“This could potentially destabilize that network that really provides services to everybody,” she said.

(Kent of the state health services department says the managed care plans – though they often are set up to serve individual counties – would not restrict access in this way.)

At Children’s Hospital Los Angeles, nearly 40 percent of the hospital’s patient services revenue comes from providing services to patients in the CCS program, said Lara Khouri, a vice president at the hospital. The hospital’s bottom line would be significantly affected if their patients had to seek care elsewhere, she said.

But children’s hospital officials and doctors say they are less worried about financial consequences than a decline in care.

Khouri said the hospital already saw problems when a population of young adults with certain genetic diseases was transferred into managed care. More than a third had to switch doctors and change prescriptions, she said.

Kuhns of the children’s hospital association said the state’s proposal threatens children’s access to the pediatric specialists who are most familiar with them and their rare diseases.

“These (managed care) plans typically don’t have these specialty providers in their networks,” she said. “You don’t want an adult cardiologist doing open-heart surgery on your special-needs child.”

Stuart Siegel, an oncologist who directs the Children’s Center for Cancer & Blood Diseases at Children’s Hospital Los Angeles, said his patients rely on the coordinated care they receive from a team of doctors at state-vetted centers.

“Patients with these diseases require decisions made quickly,” Siegel said. “If there are delays … it could literally make a difference between life and death.”

A pilot project in San Mateo County is testing some elements of the state’s proposal and may offer some insights. Started in 2013, the project involves about 1,500 children covered by the Health Plan of San Mateo, a nonprofit health insurance plan created by county commissioners.

The health plan’s CEO, Maya Altman, said the pilot has been successful, particularly in resolving concerns that parents had with traditional CCS, such as getting prescriptions on time.

Michael Stevens, the father of a 5-year-old daughter with cerebral palsy and a member of the health plan’s family advisory committee, praised the services his daughter has received in the pilot project.

“Everything seems to be faster. There is better communication and we’ve only had to contact the appeals department once, but I was impressed with how they handled it,” said Stevens, whose family lives in San Bruno. “If every county could be like San Mateo County, it would benefit all the (CCS) children statewide.”

But the project has never been independently evaluated, and some advocates doubt that the San Mateo model can work elsewhere. San Mateo County is small and relatively affluent, and its residents live within an hour’s drive of three highly rated children’s hospitals, said Dr. Louis Girling, medical director for CCS in Alameda County.  And the Health Plan of San Mateo is a nonprofit agency with a public service mission, unlike commercial insurers that contract with the state to provide managed care for Medi-Cal recipients. 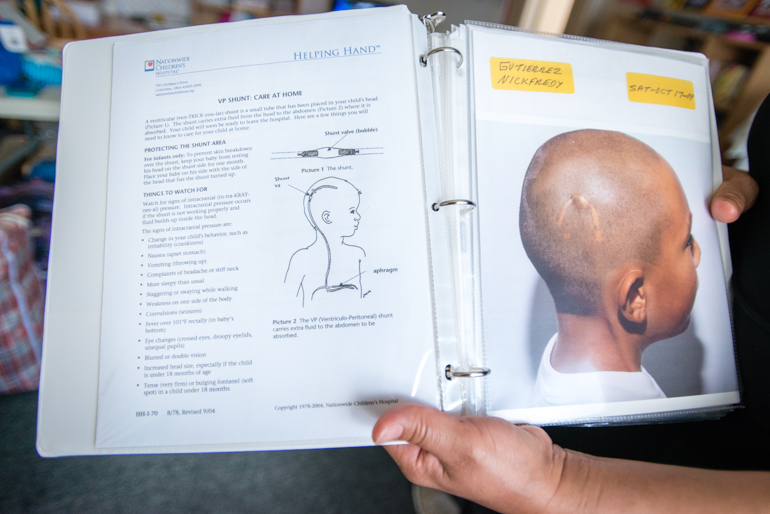 Mother of Nickfredy Gutierrez, Mercedes Maldonado, holds a binder that shows an illustration of the ventricular shunt next to a photo of Gutierrez in 2009. The shunt runs from his head to his abdomen and is used to relieve pressure from his brain caused by fluid accumulation. (Photo by Heidi de Marco/KHN)

As the state proceeds with its plans, a bill to slow down the transition is pending in the state legislature.

“It’s quite ironic that we’d talk about dismantling the (CCS) system without any data to suggest that managed care is any better,” Girling said. “Most of us in CCS agree there’s room for improvement – policies have prevented us from serving the ‘whole child.’”

But “the state really does not have a good track record in terms of rolling these patients with chronic diseases into managed care. They’re trying to push this through really way too quickly.”