Before the Affordable Care Act was even open for enrollment, Viviana Alvarado was already taking calls from people who wanted to know more.

She and about 40 of her colleagues are answering the phones for Maximus, the company Connecticut contracted to run its call center. The contractors running the troubled federal healthcare.gov website have been under intense scrutiny in the past month, but those businesses aren’t the only ones being paid to roll out Obamacare. 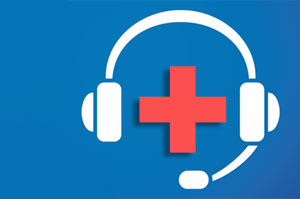 In the states that are running their own health care exchanges, call center practices vary. Oregon, for instance, set up its own; other states, like Connecticut, farm that business out to companies like Maximus.

“It’s a huge opportunity and it remains so,” says Rick Howard, an analyst at Gartner, a technology research firm. “The bottom line is there are millions of millions of folks coming in for insurance coverage. That represents great opportunity for both commercial carriers and for those contractors who are servicing health care.”

How much is Maximus making in Connecticut? In a press release, the company valued the contract at $15 million over three years, for staffing and operating the call center. But that lump sum is all the information the company provides.

Access Health CT, the state’s exchange, wouldn’t confirm the $15 million price tag. And while it will say that it is paying a per minute fee per call, it won’t say how that fee is calculated.  In fact, its contract with Maximus that it makes available to the public blacks out all language that has to do with pricing.

That means that taxpayers can’t know how much the state of Connecticut is paying Maximus.

The question is: Why?

But should pricing be proprietary in a government contract?

“Is price something that someone should be able to redact?  I sure think so.  What’s the whole point?  If everybody knows what everybody is pricing, everybody’s going to be pricing at the same level. And that doesn’t drive a good deal,” Counihan says.

Maximus refused to comment on its Connecticut pricing. In a statement, the company says call centers are in a “highly competitive industry.”

In emails to the state, the company justifies its position by saying that releasing its pricing information would “result in irreparable economic damage to Maximus and significantly weaken its competitive position in the marketplace.”

Maximus also has a contract in Hawaii. But in that state it doesn’t have to disclose its contracts at all because the health insurance marketplace, the Hawaii Health Connector, is exempt from the state’s sunshine laws.

Vermont’s exchange handled things differently. It has posted on the Internet a complete, unredacted copy of its contract with Maximus. The document spells out everything from how long a call can be on hold to how quickly it must be answered.

Mark Larson, the head of Vermont’s exchange, explains: “We are spending taxpayer dollars and we understand our responsibility to ensure that there’s transparency in how those dollars are being spent, to whom they’re being given, and what we get in return for them. And we want to make sure that it’s easy for Vermonters or others to find that information.”

According to the contract, Vermont pays Maximus 86 cents a minute for calls, and the state estimates a call volume of about 573,300 minutes per month. That comes out to about $500,000 a month.

Rick Howard, the Gartner analyst, says that, in an ideal world, none of the call center prices would matter. Everyone would sign up on the Internet.

“This is just a really complicated, initially, enrollment cycle,” Howard says. “Once the websites continue to evolve, then I would expect, over time, call center activities to be greatly reduced from what they were here in the first months or year of the marketplace.”

Until that happens, there’s money to be made. But in Connecticut, the public just can’t know how much.

This piece is part of a collaboration that includes NPR, WNPR, and Kaiser Health News.

Call Centers Got Big Contracts From Health Law, But How Big Is Unclear