Hospitals around the country have been upgrading their neonatal intensive care units to include personal webcams for each tiny patient. It’s a convenience for parents — and reduces worries about visitors bringing in germs.

The neonatal intensive care unit at St. Thomas Midtown in Nashville is the latest hospital to join the webcam wave, among facilities around the country from big cities to towns that are installing cameras over each infant.

At St. Thomas, Sherri Anderson has 20 years of experience as a neonatal nurse, watching parents run themselves ragged trying to be at the hospital every waking hour, sometimes commuting long distances.

The $1,200 cameras — which St. Thomas paid for through a special fundraiser — come from a company called Natus Medical. They provide a close-up shot that anyone in the world can log on to see — using a password.

Jill Brothers had twin boys born at 27 weeks, requiring a two-month stay in the NICU. Her husband, who plays professional baseball, was away for spring training most of that time, but he could get on the computer and watch the boys’ progress.

“This has been a crucial element to just being a part and feeling like you’re involved with their growth,” she said. “There’s lots of other people in the family that have been able to log on and see the boys and see them [in] real time, which is great.”

Brothers still came to the hospital every day, but she found herself checking the web stream when she was up in the middle of the night — to watch the boys breathing.

“I really just felt like it was safe and comfortable,” she said.

Parents’ peace of mind is only one aim, though. St. Thomas NICU nursing director Donna Darnell said the new cameras could cut down on germs sneaking into the unit from other relatives stopping by.

“There are times throughout the year that we worry about a lot of visitors. Flu season is the best example,” Darnell said.

Even during normal times, access for family and friends is highly restricted because of germs — and the cameras give many more people the opportunity to see the tiny patients. 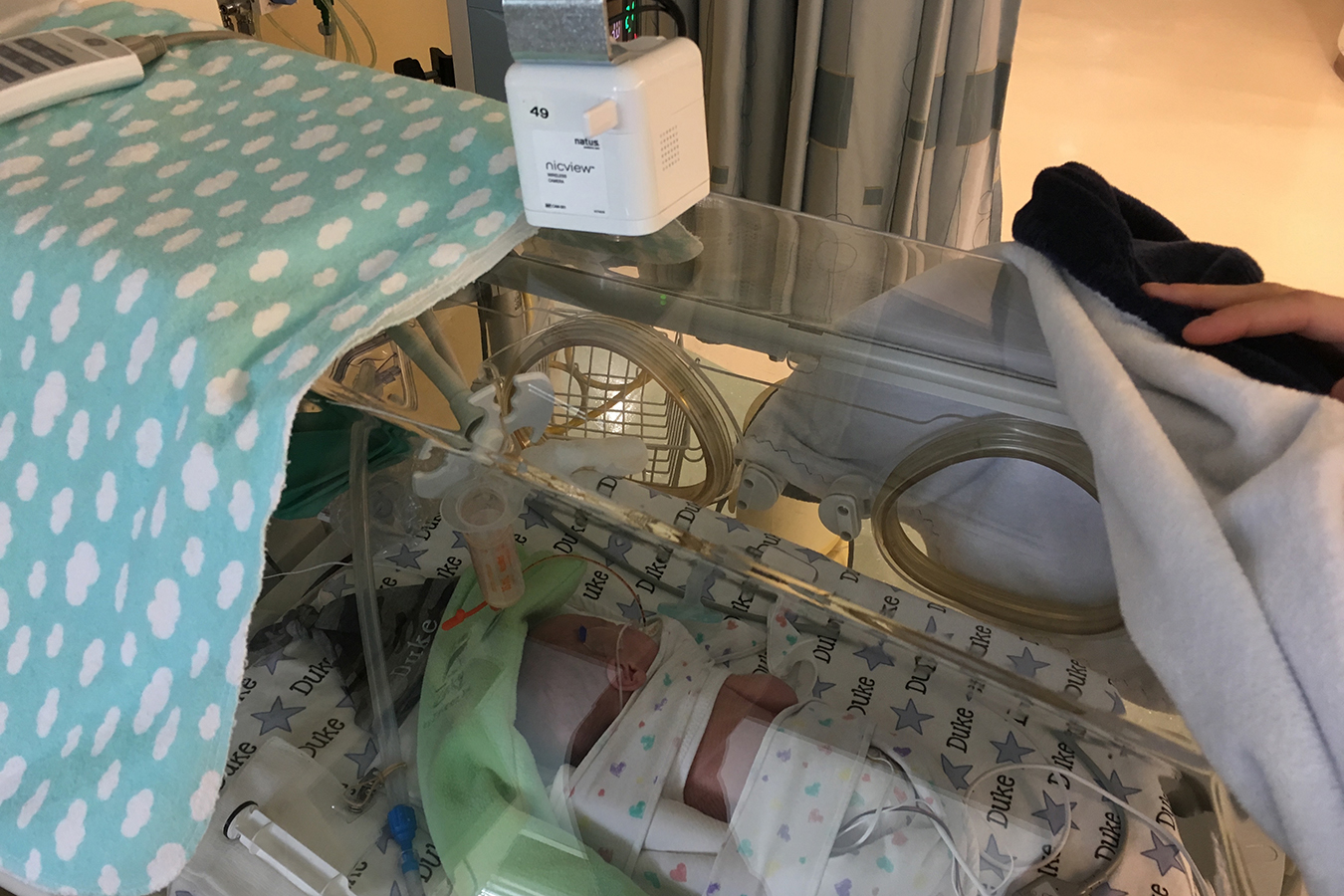 While baby Duke Brothers stayed in the NICU, his parents could watch over him via webcam.(Blake Farmer/WPLN)

In the little research that has been done, parents have loved the video access. Doctors also are OK with it, but a study published in the American Journal of Perinatology found that some nurses have misgivings about being watched all day and all night.

One of the study’s authors, Dr. Gene Dempsey from the University College Cork in Ireland, helped conduct the survey and said nurses worry they will get even more after-hours calls, wanting an explanation for what’s on screen. But, he said, that doesn’t seem to happen.

“In fact some of the workers [in hospitals with these cameras] suggested that the interaction at parent level — in terms of phone calls in the evening and at nighttime — are less when the system is in place,” he said.

Dempsey’s own hospital is launching a webcam system in the next few weeks and he has made a point of getting nurses on board.

“What we’re probably going to do, and we’ve had much discussion with the nursing staff initially, is that this would be a phased-in process,” he said.

Dempsey said they’ll start with “virtual visitation hours.” At St. Thomas, the nursing director decided to turn off the livestreams whenever a nurse is working with a child — a compromise that seems to have everyone smiling for the camera.

Cameras On Preemies Let Family In, Keep Germs Out