Last spring, at a seminar for survivors of head and neck cancer in Minneapolis, Mary Harder looked around the room with some dismay. 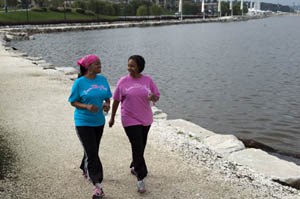 As part of her recovery from cancer, Vonda Jones (right) and her friend LaTanya Sothern exercise by walking frequently from the Maryland side of the Potomac River to the Virginia side over the Wilson Bridge. (Photo by Marvin Joseph/The Washington Post)

Many people at nearby tables relied on feeding tubes because cancer treatments had left them unable to swallow. Others suffered from substantial impairments, such as the inability to turn their head.

“There were several people who had exactly the same cancer as me, but their lives were much different because they hadn’t had any rehabilitation,” said Harder, 64, who eats on her own and moves her upper body with relative ease after undergoing surgery, chemotherapy and radiation for neck cancer.

Cancer rehabilitation focuses on problems that patients often experience after treatment, including fatigue, unsteadiness, pain, muscle weakness, swelling in their arms and legs, difficulty swallowing, numbness in the hands and feet, and cognitive changes.

Under guidance from therapists, patients can do such things as learn special exercises, practice walking or maintaining their balance, get deep massages that loosen scar tissue, and obtain devices that help with ordinary activities.

That kind of help can mean the difference between just surviving cancer and being able to return to work and live independently. For Harder, several months of intensive speech and physical therapy “made me feel I could do things and I had my life back again.”

Speech therapy began soon after the surgery that removed 43 lymph glands in Harder’s neck.  Over and over again, she would raise her Adam’s Apple as high as it could go, hold it for up to 15 seconds, and then release.  With the exercise, she never lost control over her throat muscles.

As advances in cancer treatment have prolonged lives — transforming the disease for many people into a chronic condition — rehabilitation is becoming more important. Yet it remains widely underused, medical experts say, because oncologists don’t routinely ask patients about their ability to perform ordinary activities or refer patients for services.

In a 2008 study of 202 cancer patients at the Mayo Clinic in Rochester, Minn., researchers observed that 66 percent reported a functional impairment — most commonly, a problem with walking or balance. But only 6 percent of these deficits were documented by physicians in patients’ medical charts, and only two patients received referrals to rehabilitation services.

Similarly, a 2008 study of 150 patients impaired by metastatic breast cancer found that only 21 percent of the impairments — including weakness, swelling, muscle scarring or shoulder pain — received physical or occupational therapies.

Julie Silver, an assistant professor of physical medicine and rehabilitation at Harvard Medical School, encountered this firsthand: after being treated for breast cancer in 2003, her oncologist told her she could go back to work without offering any advice about how to recover.

“I was frail, I was in a lot of pain, and I couldn’t really manage that,” said Silver, who has since written several books for cancer survivors and launched a company, Oncology Rehab Partners, which trains medical staffs in cancer rehabilitation and offers certification to programs.

“We don’t systematically screen for functional problems,” said Andrea Cheville, director of cancer programs in the department of physical medicine and rehabilitation at the Mayo Clinic, and, as a result, cancer survivors’ issues aren’t being addressed early on, when opportunities for improvement are most significant.

Research is just beginning to document how much potential for improvement actually exists.

In a notable finding published in 2009 in the New England Journal of Medicine, Cheville and researchers at the University of Pennsylvania looked at breast cancer patients with lymphedema, a type of swelling caused when lymph nodes are damaged or removed in the course of treatment. They found that patients who lifted weights in a structured rehabilitation program experienced improved strength and had fewer symptoms compared with a control group.

Many more such studies are needed, experts said. Meanwhile, communication breakdowns often obstruct the use of cancer rehabilitation, with patients hesitant to complain to their oncologists and physicians unaware of the need to ask about impairments that can accrue gradually over time, Cheville said.

“We need to raise awareness of the functional problems that cancer patients experience, and our obligation to address them,” said Julia Rowland, director of the Office of Cancer Survivorship at the National Cancer Institute, noting that there are now 12 million cancer survivors in the United States.

The American College of Surgeon’s Commission on Cancer embraced that principle this year when it said for the first time that all accredited cancer programs must offer rehabilitation services to patients. There are about 1,500 accredited programs across the country.

But what constitutes cancer rehabilitation and what best practices consist of are not yet clear. There are no generally accepted standards for programs and no clinical guidelines that medical professionals are expected to follow.

As a result, offerings vary widely. Some cancer rehabilitation programs include complementary and alternative therapies such as acupuncture or yoga; others don’t. Some programs are run by physicians and therapists who have specialized experience in treating cancer patients; others, such as fitness classes for cancer survivors offered by exercise studios, aren’t.

“That’s what needs to happen,” said Nancy Hutchison, medical director for cancer rehabilitation at the Sister Kenny Rehabilitation Institute and Virginia Piper Cancer Institute, both of which are part of the Minneapolis-based Allina Health System.

The medical field is beginning to respond, with the first textbook on cancer rehabilitation published two years ago by Michael Stubblefield, chief of rehabilitation medicine at Sloan-Kettering.

Hospitals are also bolstering efforts. Johns Hopkins Medicine started a formal program about 18 months ago, while four hospitals in Rhode Island recently signed on to an effort to expand cancer rehabilitation services across that state. The Rehabilitation Institute of Chicago is rolling out services for cancer survivors across that metropolitan area; Allina, which operates 11 hospitals, is planning to do the same across Minnesota and parts of Wisconsin.

“Athough we did lots of cancer rehab in an informal way before, we’re offering more-structured services and have arranged much more extensive training for staff,” said R. Samuel Mayer, Hopkins’s medical director of cancer rehabilitation. “Without exception, we’re seeing tremendous improvement among cancer patients who take advantage of these services.”

Now, Whitehair or his colleagues ask to see each cancer patient at the Washington Hospital Center before surgery, chemotherapy or radiation therapy so they can assess the patient’s baseline function, monitor changes while the patient is in treatment and schedule rehabilitation therapies once the person is ready to return home.

“We really believe that the physiatrist [a physician specializing in physical medicine and rehabilitation] should be part of the cancer treatment team,” Whitehair said.

Insurance companies will usually pay for some services if they are ordered by a physician, although restrictions on reimbursement for therapies may apply, Whitehair and others said. Most outpatient programs offer intensive six- to eight-week therapy regimens, with patients coming in two or three times a week, but therapy can continue for a year or more if needed. At National Rehabilitation Hospital, a six-week course of physical therapy with three doctor visits costs nearly $3,000.

Vonda Jones, 41, who lives in Prince George’s County, says she is grateful that her oncologist referred her to Whitehair after she underwent surgery, chemotherapy and radiation treatment for breast cancer in 2009.

First, the rehabilitation specialists tackled the fatigue that would overcome Jones after a simple trip to the grocery store or a morning shower, helping her revise her schedule and prescribing low-impact exercises. Then they addressed range-of-motion problems that had developed during her treatment. Therapists gave her a weighted broom handle and had her lift it repeatedly, extending her arms, for example. Also, they had her stand in a corner and walk her fingers up the wall as far as they could go, stretching weakened muscles.

After getting advice about proper nutrition and additional therapies for balance issues and peripheral neuropathy, or nerve damage that can cause numbness or tingling in the arms or legs, over the course of six weeks, Jones realized “I didn’t feel so limited by side effects any longer.”

That was Jones’s goal. “I was so determined to not have this cancer be a major life change for me,” she said. “I’m a very active person at work, at church and with my friends, and I wanted to have as much of a sense of normalcy as possible. And that’s what I’ve got.”

Cancer Patients Could Benefit From Greater Use Of Rehabilitation