When GOP presidential hopeful Mitt Romney told conservative activists on Friday that he wants to “save” Medicare by turning it into a program that would give seniors a defined sum to shop for the health plan of their choice, he teed up an issue that has the potential to sway millions of voters, especially seniors, in November. 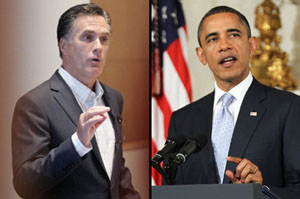 Three days later, President Barack Obama repeated his own pledge to preserve the program, proposing as part of his 2013 budget plan to reduce spending growth by about $300 billion over 10 years, but keep intact its guaranteed, specified benefits.  “What I will not support are efforts to turn Medicare into a voucher,” the president wrote in his budget.

Medicare is likely to play a key role in the 2012 elections—from the presidential race to contests for Congress. While young and middle-age voters are more focused on the economy, “seniors are single-issue voters when it comes to Social Security and Medicare,” said Democratic pollster Anna Greenberg, senior vice president of Greenberg Quinlan Rosner. “They are such an important constituency in elections because they are very reliable voters.”

That’s why every one of the top vote-getters among the GOP presidential contenders, as well as Obama, have cast themselves as protectors of the popular insurance program that provides health care for 48 million elderly and disabled Americans.  But in the face of dire warnings about the program’s long-term sustainability, every one of them has also embraced ways to lower costs that have proven radioactive in previous elections.

Republicans won control of the House in 2010 in large part after hammering the president and his party for a health care law that they said cut $500 billion from Medicare over 10 years.  That year, the GOP received the largest share of votes from people over the age of 60 in any election since the 1980s, according to Robert Blendon, a professor of health policy and political analysis at the Harvard School of Public Health.

But those votes could be up for grabs after nearly every House Republican, led by Budget Chairman Paul Ryan of Wisconsin, voted for a plan last year that built on the health care law’s $500 billion in spending reductions and went much further. The plan, which was not taken up by the Senate, would have eventually abolished traditional fee-for-service Medicare for those currently 55 and younger, and replaced it with a premium support system that would limit federal spending. Currently, Medicare pays whatever it takes to provide beneficiaries with a defined set of benefits.

Democrats ran against the Ryan plan in a special congressional election in a conservative upstate New York district last spring, and scored an upset victory, citing government reports that, under his plan, seniors would pay dramatically more for health care.

Now, with Romney, Rick Santorum and Newt Gingrich embracing many of Ryan’s ideas, Democrats are hoping to use that as a cudgel once again in November. “Democrats will try very hard to link Romney with Ryan and whatever is negative about it,” said Blendon.

Romney has had a tough balancing act, trying to avoid positions that would alienate swing voters in November while attempting to align himself in this tough primary season with Republican conservatives who embraced Ryan’s plan.

“Ryan is a hero to conservative Republicans,” said Republican pollster Whit Ayres. “They see him as a brave guy who took on a program that is going bankrupt.”

Speaking in South Carolina last month, Romney reiterated support for Ryan’s ideas about how to reduce Medicare spending, calling them “absolutely right on.  Give people choice. Let competition exist in our Medicare program.”

Last November, Romney unveiled his own premium-support plan, which like Ryan’s, would provide a set amount to people to purchase coverage.  Romney has promised that future seniors who like the fee-for-service Medicare plan can opt for that, instead of purchasing private insurance.  He offered no details about how that option would work, however, and critics say that capping the government’s contribution would likely mean that beneficiaries pay more for the same benefits. In December, the candidate embraced a similar proposal by Ryan and Sen. Ron Wyden, D- Ore.

Beneficiaries would be on the hook for paying the difference if they sought more expensive plans; however, Romney said that all health plans would have to offer coverage at least comparable to what the program provides today.

Supporting the Ryan-Wyden compromise has removed the “bull’s eye” target from Romney’s back that “Democrats had planned to use,” since he would preserve traditional fee-for-service Medicare for those who want it, said Gail Wilensky, a campaign adviser to 2008 GOP presidential nominee John McCain, and head of the Medicare program in the George H.W. Bush administration.

Greenberg, however, doesn’t think so. She predicts Democrats will attack Romney in the general election for his statement last year that he would vote for the original Ryan plan.  “It doesn’t matter that he now supports Ryan-Wyden,” she said.

Santorum has also been a vocal advocate of Ryan’s ideas, and has made no effort to soften the House budget plan to appeal to a broader spectrum of voters, for instance, by keeping traditional Medicare as an option.   “It is a plan that says innovation with insurance companies and consumers drive down costs, instead of having this government-run Medicare system. … You have Medicare driving the entire health care system in this country and it’s crushing it,” he said last month in Iowa.

But while Santorum praised the House Republican plan, Gingrich initially called it radical. “That is too big a jump. I think what you want to have is a system where people voluntarily migrate to better outcomes, better solutions, better options,” he said on NBC’s Meet the Press last May. Gingrich later commended Ryan for partnering with Wyden to keep Medicare’s fee-for-service as an option going forward.

President Obama, meanwhile, has spent the last two years trying to counter the Republican narrative that the health law cuts Medicare coverage. He asserts the law slows the rate of spending increases, largely at the expense of medical providers and gives seniors new benefits, such as free preventive services and lower prescription costs.

The president says he wants to preserve Medicare’s current guarantee to cover set benefits, but curb costs through greater efficiencies, such as strengthening incentives for doctors, hospitals and other health care providers to give high-quality care, and cutting expenditures for those who get care through the Medicare Advantage program. One quarter of Medicare recipients are enrolled in these mostly private managed care plans, and the government spends  on average 7 percent more per beneficiary in those plans.

In his budget proposal, the president sought additional savings by increasing premiums for higher-income beneficiaries, raising the price for some home health care services and increasing efforts to reduce fraud and waste. In addition, people who buy the most generous policies to supplement Medicare coverage, called Medigap, would pay a surcharge because such policies have been found to increase use of health care.

The tug-of-war for the senior vote will only intensify as the general election draws closer. Senior voters turn out in much larger numbers than younger Americans. Thirty-four percent of voters in the 2010 congressional election were age 60 or older, even though this age group accounts for only 24 percent of the adult population, Blendon wrote in a July article in the New England Journal of Medicine.

“The views of older voters are particularly important,” he added, “because this large voting bloc swings in its loyalty between the political parties, turns out to vote at a higher rate than members of other age groups, and cares about health care and Medicare as voting issues.”