HAYFORK, Calif. — For almost 21 years, Steve Mercill has lived on Doctor Lane, an unmarked, unpaved street off Hyampom Road, about two miles from the center of this tiny mountain town nestled in northern California’s redwood forests. 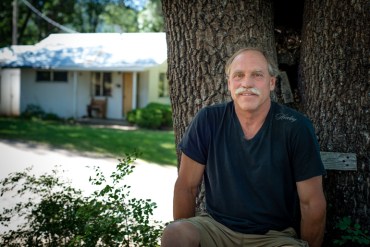 Steve Mercill, 59, lives in Hayfork, Calif., and is the caregiver for his 91-year-old father (Photo by Heidi de Marco/KHN).

Doctor Lane is easy to miss, except for a white bridge that marks its start. It was a gift from the town to honor Mercill’s dad, Earl, who for more than 35 years was Hayfork’s doctor. It replaced a makeshift log walkway mill workers laid down years ago so Dr. Mercill could get across the creek to go to work.

Now, the bridge’s upkeep is one of Steve’s chores. He moved here from Napa with his wife and children in 1993 to care for his aging dad and to manage the family’s house and the sprawling property that surrounds it.

Mercill, 59, is one of a growing number of baby boomers leaving their jobs to care for elderly parents, who generally are living longer because of medical advances. Like many of these workers, whose efforts are believed to save millions of dollars in nursing home costs, he’s uninsured.

Before California opened it’s subsidized insurance exchange, about one in three home care workers lacked health insurance, according to the Paraprofessional Healthcare Institute, a New York-based policy organization. It’s unclear how those numbers have changed. 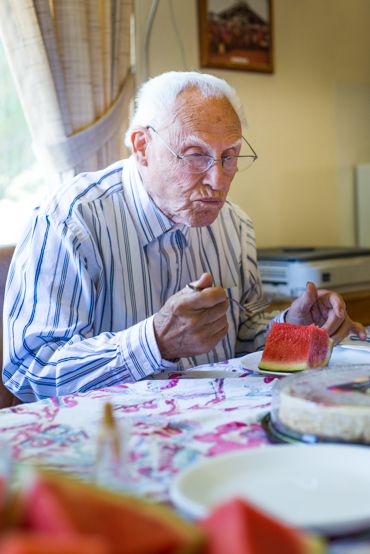 For Mercill, insurance coverage has nearly always been beyond his grasp.

His dad pays him a couple of thousand each month. Steve Mercill’s wife, Mary Elaine, works as a special education aide, bringing their income to about $60,000 a year – but Mercill says it’s not enough to cover him and his youngest daughter, 22, who is a college student.

Mercill has been self-employed or worked jobs, like construction, that didn’t offer health insurance, for most of his life.

Now his household income is too high for Medi-Cal, the free California insurance program for the poor and disabled.

Theoretically, he’s a candidate for subsidized coverage under Covered California, the state’s subsidized insurance marketplace. But when he tried to enroll earlier this year, he couldn’t overcome the technical challenges.

By his own admission, he’s not computer savvy, plus Internet service is temperamental here, and he doesn’t get it at home. Mary Elaine tried to help him by using a computer at her school, but the website wasn’t working well – a problem common throughout the state at the time. She also had some security concerns.

“It popped up saying ‘security risk’ and there was red flashing. I was afraid of doing it that way, so we tried calling,” said Mary Elaine, who also says she’s not good with technology. Their experience with the call center wasn’t much better — the wait was long and the site kept crashing while they were on the line. So they gave up.

Now, she worries that if something happened to her husband they would be on the hook for the bills. For basic care, they’ve relied on their son, who’s a physical therapist, in the past. He helped his dad cope with an injured achilles tendon, for example. But Mercill thinks he probably needed surgery. 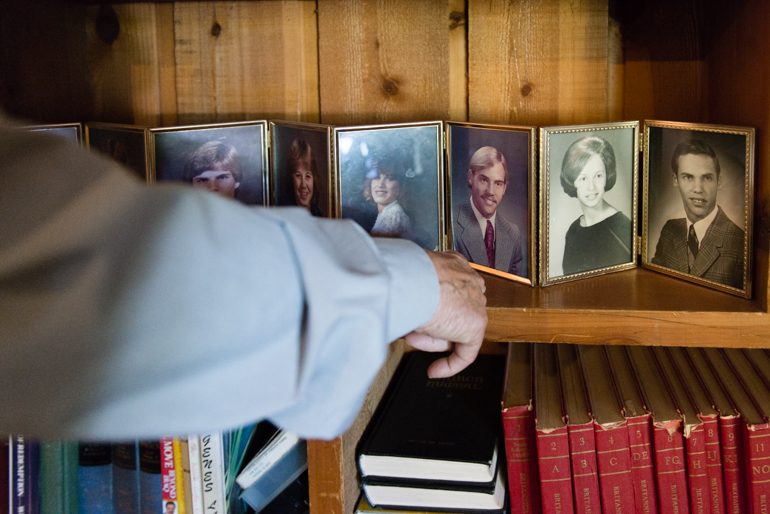 Dr. Earl Mercill points to his son Steve Mercill, one of his eight children (Photo by Heidi de Marco/KHN).

For minor procedures, they used to turn to his dad, but Earl Mercill doesn’t practice anymore. The clinic he built in town has been sold off to a regional hospital and is too expensive, Mary Elaine and Steve say. So Mercill’s closest option is a clinic in Mad River, a town about an hour’s drive away on a windy two-lane road.

“I feel terribly guilty that I have insurance and my family doesn’t, but we’re going to try again,” said Mary Elaine, referring to open enrollment for Covered California in the fall. “I’m hoping we can find something through Obamacare that….we can afford.

Mercill and his wife are keeping their fingers crossed that he won’t need expensive medical care between now and October.

As his dad has gotten older and less independent, Mercill said he’s had to give up side jobs he had in town teaching physical education and doing construction. Earl Mercill, 91, is still in relatively good health but has battled prostate cancer, suffered a heart attack and had heart surgery. Recently, he fell off a chair and broke his arm.

Steve’s glad to spend time with his father, but the job can be tough and isolating, he says.

He tries to stay busy by chopping wood, gardening and playing music. That helps keep him from feeling depressed — sometimes more successfully than others. Mercill used to binge-drink, and though he admits he’s had some slip-ups, he’s been able to stay mostly clean because of the support of his family, especially his dad, he says.

Every day around 8 a.m., Mercill walks from his own small white house up the driveway to the brown two-story house where his father lives. He cooks meals and cleans the house, with Mary Elaine’s help. If his father is ill, he bathes and dresses him, helps him use the bathroom and tucks him into bed. When his dad is in good spirits, the two garden together, read the Bible and sing hymns. On Sundays, they go to church. 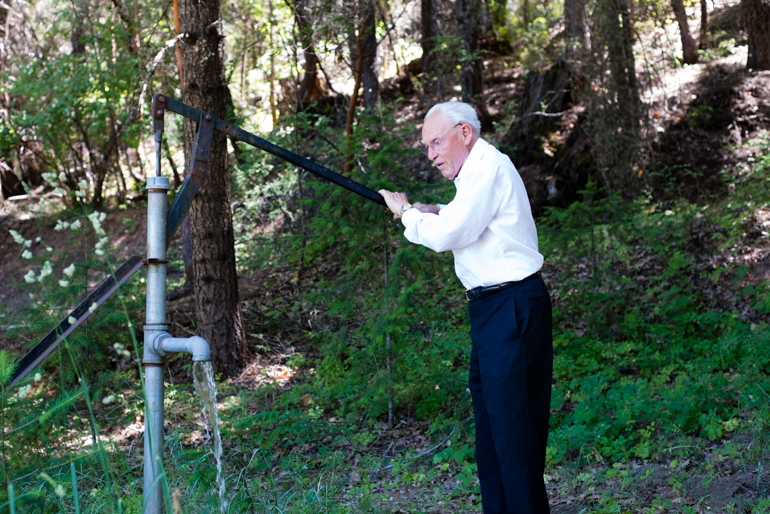 Dr. Earl Mercill pushes the lever of the water pump he built in the backyard of his house in Hayfork, California, on June 18, 2014. Steve Mercill says his dad takes daily walks around their 40-acre property daily (Photo by Heidi de Marco/KHN).

“It’s not totally my cup of tea — caregiving — but my dad’s done a ton for our whole family, and I’ll do anything [for him] till the day he dies. Whatever it takes,” he says. “He’s got a good sense of humor. If it wasn’t for all that I wouldn’t be able to do it.”

Mercill added that his father has always wanted to die peacefully, at home.

A nursing home “would be a curse of death to him,” Mercill said. “I can’t do that emotionally. If at all possible we’re trying not to.”

Steve Mercill is still uninsured. The ex-surfer says getting health coverage is just not a priority for him right now.

Taking care of his father is a 24-hour-a-day job that leaves him with little time, or motivation, to research his health care options. “I barely hang in there sometimes … mostly [because of] the mental stress of dealing with elder care,” he said.  “Dad is doing better than me.”

For now, Mercill has only dental coverage through his wife’s employer.  Although he is grateful he hasn’t needed urgent medical care in the last year, he knows he needs health insurance.

He recently hired additional people to help him care for his father and hopes the extra help give him time to figure out his health care insurance options.

Caring for His Elderly Dad With No Insurance Of His Own