The underlying premise of some of the 2010 health law’s most ambitious changes to Medicare is using financial incentives to get doctors and hospitals to improve the quality of care and lower costs. Both accountable care organizations and the Value-Based Purchasing Program aim to give bonuses to hospitals that achieve such goals.

But a new study from the nonpartisan Congressional Budget Office gives more cause for pessimism. The CBO looked at four existing Medicare “value-based” demonstration projects and found that three of them resulted in no savings of note. 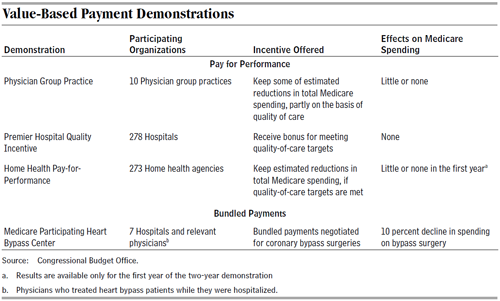 The key factor associated with success in the demonstrations of value-based payments was the nature of the incentive offered to providers. The bundled-payment demonstration achieved savings for the Medicare program, but the demonstrations that paid bonuses to providers on the basis of their quality scores, estimated savings, or both, produced little or no savings. The estimated savings in the Heart Bypass demonstration were in the range of 5 percent to 10 percent for five of the seven hospitals and were about 20 percent for the other two. Those differences were attributable to variations in the discounts that hospitals and physicians were willing to offer Medicare in their bundled-payment rates, which depended on such factors as the competitiveness of the local markets and providers’ strategic business decisions.

Coincidentally, on Wednesday, the same day that the CBO released its report, the Premier health care alliance also released the third year results of its “QUEST” effort to improve quality and lower costs for 157 hospitals.

Premier said that by sharing data and successful practices — not by offering financial incentives — member hospitals saved  a comgined $4.5 billion in wasteful spending while improving quality. Susan DeVore, the president and CEO of Premier, says that the common denominator for the hospitals that really excelled wasn’t money so much as a concerted commitment among hospital boards, executives and the rank-and-file employees to make changes.