New findings from the Congressional Budget Office may make it harder for Republicans to portray a provision in the health law designed to limit insurers’ losses and gains as a “bailout” for the industry. 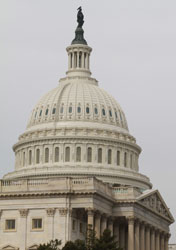 The House Oversight and Government Reform panel is scheduled to have a hearing Wednesday examining the law’s “risk corridors,” which limit plans’ exposure to possible upheavals caused by the transition to marketplaces that require health insurers to accept all comers, no matter how poor their health.  Witnesses include Sen. Marco Rubio, R-Fla., who is sponsoring legislation to repeal the risk corridors, which he and the bill’s co-sponsors have called a “blank check for a bailout of insurance companies.”

The CBO’s budget outlook, released Tuesday, projected that the risk corridor program will actually produce $8 billion over its lifespan rather than cost taxpayers money.  Previously the nonpartisan agency had not counted the program as a cost or benefit to the government because it assumed that payments from insurers would offset payments made to other insurers.

That previous estimate, however, was made before President Barack Obama’s announcement in November that some people in the individual market who received cancellation notices could keep their health plans for another year. Some analysts have feared that change may keep healthy people out of the online marketplaces, which could increase premiums next year. Critics have said the flawed rollout of the health law, along with its design, meant the government would end up paying more money than it would ever recoup from insurers.

But the CBO reaches a different conclusion.  In its report, released Tuesday, CBO said that in a similar program set up as part of the Medicare prescription drug program, collections from insurers exceeded payments to health plans, yielding net collections that have averaged about $1 billion a year, or between 2 percent and 3 percent of total covered costs for drugs under Part D.

“That experience suggests that plans’ premium bids in the [Affordable Care Act’s] exchanges will probably exceed their costs by a few percent” despite technical issues in the rollout, CBO said.

CBO also found that the health law’s two other programs to help insurers manage risk — risk adjustment and reinsurance —  are estimated to have no budget impact.

Don’t expect the CBO’s findings to stop the GOP’s campaign to repeal the law’s risk corridors. A Congressional Research Service memo  released Tuesday by House Energy and Commerce Committee Chairman Fred Upton, R-Mich., raises questions about the administration’s ability to make payments to insurers without a budget appropriation from Congress allowing them to do so.