Seniors and the disabled would pay sharply more for their Medicare coverage under a new plan by House Republicans aimed at curbing the nation’s growing deficit, a Congressional Budget Office analysis shows. 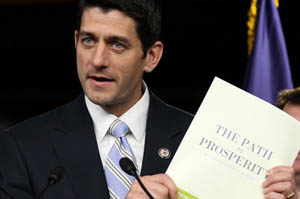 For example, by 2030, under the plan, typical 65 year olds would be required to pay 68 percent of the total cost of their coverage, which includes premiums, deductibles, and other out-of-pocket costs, according to CBO.  That compares with the 25 percent they would pay under current law, CBO said.

The GOP budget proposal also would raise the eligibility age for the politically popular program  and repeal big chunks of the health care overhaul law approved by Congress last year.

House Republican Budget Plans: What It Means, What’s Next

Budget Committee Chairman Paul Ryan of Wisconsin unveiled the fiscal 2012 budget at a packed press conference where he was flanked by Republican members of the budget panel.  The proposal comes amid growing concern over the federal budget deficit and is part of an overall GOP effort to reduce federal spending by at least $5 trillion over the coming decade.

“Washington has been making empty promises to Americans from a government that is going broke,” Ryan said. Unless something is done, “the red ink is going to destroy our economy.”

Besides overhauling Medicare, his 10-year budget proposal also would give states more control over Medicaid, the state-federal program for the poor, but cut the amount states would receive for the program from federal coffers by hundreds of billions of dollars over a decade.

Americans would not be required to buy health insurance, under the proposal  and employers would not have to offer it either.  States would not be on the hook to set  up new insurance marketplaces.

The changes immediately drew criticism from Democrats and advocates for the elderly and the poor. Many zeroed in on proposed changes to the Medicare program. The Ryan proposal would do away with the traditional Medicare program and shift beneficiaries into private insurance plans in 2022, under a model called “premium support.”

Medicare enrollees would be given a set amount from the government to purchase private plans. Those plans would cost considerably more than traditional Medicare, the CBO says, partly because  private plans pay hospitals, doctors and other providers more and have higher administrative costs. At the same time, enrollees would also pay a higher percentage of the overall cost of their coverage.

“What CBO is saying is beneficiaries would pay much less under traditional Medicare for two reasons.  The overall cost of the plan would be much cheaper and they would pay a lesser share of that less costly plan,” said Edwin Park of the left-leaning Center on Budget and Policy Priorities.

Ryan’s proposal also would scrap the health care law’s Medicaid expansion and repeal a voluntary long-term care insurance program as well as cancel an advisory board created in the law to recommend changes to Medicare spending.

Chip Kahn, president and chief executive officer of the Federation of American Hospitals, said that Ryan’s plan to repeal the law’s coverage expansions but keep the provider cuts “will severely impact access to essential medical care for seniors, as well as the lowest income Americans.”  In last November’s  elections, Republicans criticized the Democrats for the Medicare provider cuts, saying they would jeopardize seniors’ access to care. 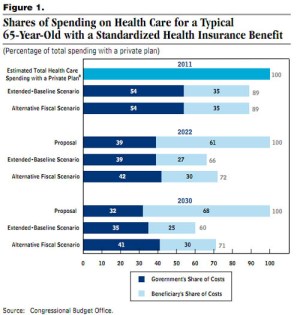 “They’ve taken those savings — the same ones that they’ve criticized — in their plan,” Budget Committee ranking member Rep. Chris Van Hollen, D.- Md. said, adding that “the health care reforms enacted in the Affordable Care Act, which they say they’re repealing, they’re not repealing at all.”

The CBO highlighted key features of the proposal, based on information from Ryan’s staff and its own analysis, including:

— Starting in 2022, the eligibility age for Medicare would increase by two months per year until it reached 67 in 2033.

— The so-called “doughnut hole” in the Medicare prescription drug benefit  in which beneficiaries pay 100 percent of drug costs  would continue under the Ryan plan.  The health law passed last year calls for the coverage gap to be ended by 2020.

— The private plans offered to Medicare enrollees starting in 2022 would have to comply with a standard for benefits set by the Office of Personnel  Management, and would have to charge the same premiums for all enrollees of the same age.

— The premium support payments would vary depending on the health status and the incomes of the beneficiaries.

The CBO report also said that in 2022 the average government payment for a 65 year old in Medicare would be $8,000. In each successive year, it would increase to reflect inflation and the enrollee’s age. Patients’ share would rise sharply. Higher-income beneficiaries would get a lower premium support payment.

CBO: Seniors Would Pay Much More For Medicare Under Ryan Plan