The rate of uninsured Americans dropped slightly for the second consecutive year in 2012, from 15.7 percent to 15.4 percent, largely a result of more people enrolling in Medicare and Medicaid, the U.S. Census Bureau reported Tuesday.

The closely-watched report found that about 48 million Americans were uninsured in 2012, down from 48.6 million in 2011, a change the agency said is not statistically significant. The report is the last look at the uninsured before the major coverage expansions of President Barack Obama’s health law take effect in January. 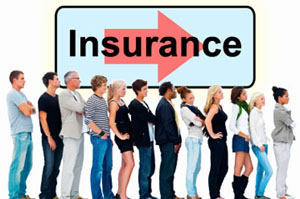 “It is encouraging that fewer people were uninsured in 2012 than in the previous year, but the huge number of Americans still without health insurance is a stark reminder of the important work that lies ahead,” Ron Pollack, executive director of Families USA, a consumer advocacy group, said in a statement.

One of the most significant changes was a decline in the rate of uninsured children, from 9.4 percent in 2011 to 8.9 percent, largely related to government efforts to make it easier for children to get coverage and keep it.

“Uninsurance is already low for children, and the fact that it still appears to be declining is an encouraging sign,” said Genevieve Kenney, a senior fellow at the Urban Institute. “It shows when there is a concerted public policy focus on a problem, it can pay off.”

The uninsured rates for all other age groups showed no statistically significant change, the bureau reported.

The census data did not show any sign that employers were moving to drop coverage as a result of the federal health law.

The number of people with private health insurance increased slightly in 2012 to 198.8 million, up from 197.3 million in 2011. Those with employment based coverage rose slightly from 170.1 million to 170.9 million.

“While neither change was statistically significant, they serve to make the point that there hasn’t been a negative impact in the private health insurance market,” said Paul Hughes-Cromwick, senior health economist of the Altarum Institute based in Ann Arbor, Mich.

Elise Gould, director of health policy research with the Economic Policy Institute, noted a slight increase in the percent of people with employer-sponsored coverage, from 58.3 percent to 58.4 percent —the first increase since 2000. That could be a sign of the improving economy, she said.

Devon Herrick, senior fellow at the conservative National Center for Policy Analysis, also noted an increase of 257,000   in the number of uninsured wealthier Americans– those with annual incomes above $75,000. “This figure has been climbing for years — possibly due to people who simply do not find health coverage a good value,” he said.

The nation’s uninsured rate reached a peak of 16.3 percent in 2010, when about 50 million people lacked health coverage. That same year, Obama signed the Affordable Care Act into law. 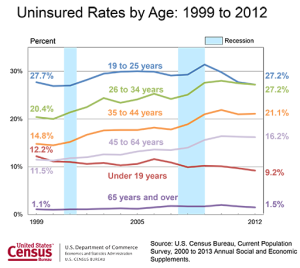