The Obama administration on Wednesday released a broad set of regulatory changes to the health law that would give some consumers additional time to stay in plans that do not comply with all its coverage requirements and all consumers more time to enroll in coverage come 2015. 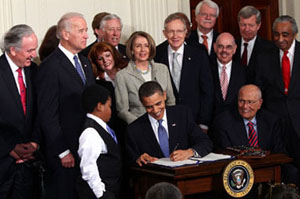 President Barack Obama signs the Affordable Care Act during a ceremony at the White House in March 2010 (Photo by Win McNamee/Getty Images).

In response to reporters’ questions, an administration official said repeatedly that March 31 remains the enrollment deadline for consumers who want to get coverage on the health insurance exchanges this year.  After problems with the rollout of the health law’s web site and lower-than-expected enrollment, there had been speculation that the deadline would be extended.

The rules changes, released jointly by the Department of Health and Human Services and the Treasury Department, were published now to provide certainty and clarity for consumers, employers and insurers, officials said.  “Unlike last year, we’re putting out the policies early, they’re clear, people can rely on them,” an administration official said.

Administration documents also said the provisions were developed “in close consultation” with several members of Congress, including Senate Democrats Mary Landrieu of Louisiana and Jeanne Shaheen of New Hampshire. Both lawmakers are facing tough re-election campaigns this fall.

“There is broad agreement that if more young and healthy individuals choose not to participate in the new marketplaces, it could lead to higher premiums for those consumers that remain in the exchanges,” she said “That is why it is crucial that sufficient steps be taken to stabilize the market…”

Republicans criticized the decision to allow people to remain longer in plans that do not comply with the health law.

“Once again, the Obama administration has shown it will do whatever it takes to hide the true impact of ObamaCare from the American people – at least until after the next election,” said Sen. Orrin Hatch, R-Utah, ranking member of the Senate Finance Committee.  “The fact is Americans should be able to keep the insurance – and the doctors and hospitals – of their choosing, as the president promised. Pushing this off for two more years isn’t a solution at all.”

Robert Laszewski, a consultant and former insurance industry executive, said in a note to his clients that allowing people to keep policies that don’t meet the law’s standards doesn’t bode well for insurers.  Those policyholders need to sign up for new coverage – often at higher rates – to offset the costs of enrollees who are older or sicker, he said.

Brian Haile, senior vice president for health policy at tax service Jackson Hewitt, said adding a month to what was previously planned for the open enrollment period next year is a good idea. “Given that so many Americans are cash-strapped during Christmas,” he said, “the extension … to Feb. 15, 2015 is hugely beneficial to them – and the overall enrollment effort.”

Julie Appleby contributed to this article.