SANTA ROSA, Calif.  With valet parking for patients, video-conferencing for parents of premature babies and a healing garden abloom with azaleas, Santa Rosa Memorial Hospital tries to maintain the amenities of a thriving community hospital.

But chief financial officer Mich Riccioni is focused on the fiscal strains Memorial is facing. Nearly a quarter of the hospital’s patients are on California’s Medicaid program  and the state has been trying for years to cut its reimbursement rates for hospitals and other health care providers. 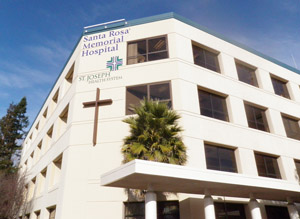 Memorial, a 278-bed hospital in this city 55 miles north of San Francisco, sued California to try to stop the payment reductions. Now it is part of a case before the U.S. Supreme Court that could redefine states’ responsibilities on Medicaid services and ultimately determine whether Democratic Gov. Jerry Brown can go forward with cuts he says are vital to closing the state’s budget gap. The court is likely to hear arguments in the fall and render a decision by next spring.

Many states are pressing for more flexibility on Medicaid, a joint federal-state health program for the poor and disabled. But Memorial, as well as other hospitals and doctors, counter that the steep cuts violate federal law, which requires that payments be set high enough to ensure providers will see enrollees. They note the state’s reimbursement rates rank 46th among the states.

The Obama administration recently proposed a rule that would require states to consider the impact of payment cuts and to perform reviews to see if patients are getting necessary services.

In 2008, California targeted its Medicaid program, called Medi-Cal, which today has an annual budget of $42 billion. The legislature and Republican Gov. Arnold Schwarzenegger approved a 10 percent cut in payments to Medi-Cal providers.

In the legal battle over reimbursement cuts, the U.S. 9th Circuit Court of Appeals ruled against the state in several cases. In January, the Supreme Court agreed to hear the case, based on Memorial’s suit and two others. The court will focus on whether outside groups, such as hospitals and other providers, as well as Medicaid recipients, have the right to sue when they believe the state is violating federal law. For now the state  barred by the 9th Circuit injunction  is holding off on the disputed cuts at issue in the lawsuit.

“This is an extremely important case,” said Charles Luband, counsel with the law firm Ropes & Gray LLP in New York City, which has drafted letters in support of hospitals and doctors in the case. “The Medicaid statute was created to assure payments were sufficient to enlist enough providers to participate in the program. That’s why it’s important providers be able to bring such lawsuits to assure that statute has meaning and relevance.”

Sara Rosenbaum, chairwoman of the Department of Health Policy at George Washington University, said the case could have broad ramifications for patients. If California wins, Medicaid recipients wouldn’t be able to sue states to compel them to fulfill an array of duties under the law, such as conducting “fair hearings” for enrollees deemed ineligible, she said.

But 22 states, in an amicus brief, asserted that they must be able to control their own Medicaid spending and that a ruling against California would open a spigot of suits from health care providers.

“To allow private litigants to bring such actions would devastate amici States’ financing ability to provide assistance to its ever-growing lower income citizens in the current economic climate,” the states said.

The Obama administration is backing the states up. In an amicus brief that angered consumer advocates, the Justice Department said that Medicaid patients and providers can’t sue state officials to block payment. It argued that allowing such suits could lead to “a plethora of private actions threatening disparate outcomes.” Federal health officials should decide when cuts go too far, the brief said.

The court isn’t expected to rule on whether the proposed provider cuts are legal. If the providers win in the Supreme Court, that issue would likely be sent back to the 9th Circuit. Also, the administration’s proposed Medicaid rule on payment cuts isn’t likely to have much impact; the Supreme Court will be considering the narrow issue of whether private parties have standing to sue states over alleged violations of the Medicaid law.

‘California Must Live Within Its Means’

Medi-Cal  the largest chunk of California general fund expenditures after education  covers 7.5 million people and is growing, according to state officials.

Brown and the legislature agreed on a budget that would cut rates by 10 percent for Medi-Cal providers like Memorial that don’t have contracts with the state and up to 5 percent for providers such as doctors. Officials estimate it would save California $567 million this year.

“These are not choices we’d make in another environment,” said health department spokesman Norman Williams. “But California must live within its means.”

One of the plaintiffs in the Supreme Court case is Norma Jean Vescovo, founder of the Van Nuys-based Independent Living Center of Southern California serving about 6,000 disabled clients a year. She says her clients have trouble finding doctors and druggists who will accept Medi-Cal’s reduced rates.

“We’ve had diabetic patients who couldn’t get their medications,” Vescovo said. “When you look around, you see pharmacies closing.”

“They want to pay me 10 percent below my costs,” said Gary Avnet, owner of Sayre Medical Pharmacy in Southern California. “What do I do?” Selling pricey drugs for diabetes and HIV below cost means, “I’d be out of business,” he said.

In downtown Los Angeles, Jerry Shapiro runs Uptown Drug and Gift Shoppe, a store his father opened on VJ Day in 1945. Shapiro said he breaks even on drugs costing up to $124, but loses money filling costlier prescriptions for serious conditions such as cancer or multiple sclerosis. “I’m having a very tough time,” he said. “I borrowed a lot of money to stay in business.”

While big box stores can better absorb cuts, small pharmacies that offer services like delivery and patient counseling are hurt more by the reductions, Shapiro said. “I had my house completely paid for and now I’m in hock for more than I ever had a mortgage for,” he said.