Health insurance companies are on the prowl for more customers. There are still three months to go for people to enroll in health plans under the Affordable Care Act, but insurers don’t want to rely solely on state or federal websites to find them.

Some are finding a path to new customers by partnering with companies that operate health-screening kiosks –- those machines in supermarkets and drug stores where people check their blood pressure or weight. 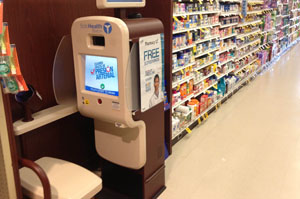 A SoloHealth kiosk in a Safeway supermarket in Lafayette, California. SoloHealth has an exclusive contract with Anthem Blue Cross in Calif. to promote that company’s plans on the Covered California marketplace. (Photo by April Dembosky/KQED).

One of these kiosks sits in aisle 10 of a Safeway grocery store in a city near San Francisco. Sitting down at the machine is like slipping into the cockpit of a 1980s arcade game. There’s a big plastic seat and foot rest for measuring weight and body mass index, a window for testing vision and a blood pressure cuff.

“Make sure the cuff comes up above your elbow,” says an attractive brunette on screen. She is wearing a white lab coat, and she asks a lot of personal questions, like “Do you have a blood relative who was told they have a heart problem?” And, “During the past 30 days, how many days have you felt sad or depressed?”

The machines are owned by a company based near Atlanta called SoloHealth. It started installing the kiosks in Walmart and other retail stores in 2008 to give people a way to keep better track of their health. Today there are more than 3,500 SoloHealth stations across the U.S. and the company plans to install another 1,500 this year.

SoloHealth first made money by selling ads for pharmacy items displayed near the kiosks. But in the era of health care reform, it happened upon a new business model. The data it collects is suddenly very valuable to health insurance companies.

“As much as we’ve moved to the market, the market has really moved to us,” says Bart Foster, CEO of SoloHealth. “We’re able to provide much more detailed information than the health plans even know what to do with today.”

In this case, providing means selling information about people who have used SoloHealth kiosks. For now, SoloHealth is selling names, email addresses and phone numbers to insurers who want to market health plans directly to consumers. Now that all Americans are required to have insurance by March 31 or pay a penalty, insurers are looking for new ways of finding potential customers, and competing with each other to get their attention. Anthem Blue Cross is one of them. It brokered an exclusive agreement with SoloHealth to be the sole insurance company featured on kiosks throughout California.

“We know that engaging consumers early and engaging them with our messaging helps improve the chances of them choosing Anthem as their health plan,” says spokesman Darrel Ng.

As a part of that strategy, SoloHealth added a new service to its machines in October offering help with understanding the Affordable Care Act.

“If you would like to learn more about the upcoming changes to the health care system and how they affect you” a male voice now says to visitors at the kiosks, “select the ‘continue’ button at the bottom of the screen.”

A drawing of a doctor with a stethoscope around his neck flashes and the voiceover says, “We can have an experienced professional reach out to help you find the plan that meets your specific needs.”

But what the friendly voice doesn’t make clear is that the “experienced professional” is not a doctor or SoloHealth representative, but an insurance rep. That is only explained after the customer enters his or her name and email.

“Consumers have every reason to be shocked this is happening,” says Pam Dixon, executive director of the nonprofit World Privacy Forum based in San Diego.

She says most consumers don’t understand that their information is being sold. While there is a two-page health privacy disclosure, it can only be viewed by clicking a blue button at the bottom of the screen. Whether customers read it or not, they agree to all the terms when they hit a separate green button. Dixon says that’s not good enough.

“The fact that they’re not being told in a clear, conspicuous and prominent manner is problematic,” she says.

SoloHealth says it is reviewing the customer experience of its kiosks.

After partnering with insurance companies SoloHealth has made another recent change. Until a couple weeks ago, the company’s comprehensive privacy policy — governing what the company can do with the data it collects — wasn’t on the machine. There was a web address provided, but since there was no internet connection at the kiosk, there was no way to read it. At first, SoloHealth said it was too cumbersome to scroll through the information on the small kiosk screen. But then, in mid-December, the company added the full policy to its machines. SoloHealth said the change was to improve transparency.

“We work with retail partners, our attorneys, and our corporate sponsors to make sure that we’re totally buttoned up,” says Foster, SoloHealth’s CEO. “We have a number of very large companies that have looked at this and are very comfortable with where we are.”

But some consumers aren’t very comfortable. Stacey Winn has been using the kiosk at her local supermarket for the last six months to track her blood pressure. She doesn’t remember ever seeing a privacy policy, even when she visited late last month after it was added. What she did notice for the first time were ads for a health insurance plan. Now she feels uneasy about her blood pressure records, weight, age, and ethnicity details being stored in SoloHealth’s database.

“I wonder now what they’re doing with that information when I hadn’t really wondered that before,” she says. “There’s a saying that if a service is offered for free then you’re actually the product that’s being sold, and I think that this is turning into an example of that.”

This story is part of a reporting partnership with KQED, NPR and Kaiser Health News.