Some lawmakers and children’s health advocates who supported the 2010 health law now find themselves at odds with the Obama administration over an idea that initially seemed simple – expanding coverage for kids’ dental care.

They say that without major changes, the children they hoped would gain dental coverage — families who don’t qualify for Medicaid or the Children’s Health Insurance Program — may not be able to afford it.

“This is a huge disappointment,” said Sen. Ben Cardin, D-Md., a longtime proponent of improving children’s access to dental care who is leading the Capitol Hill effort to overturn current health law regulations for pediatric dental services. “This is inconsistent with the philosophy of the Affordable Care Act.”

Pediatric dental care is one of the health law’s “essential health benefits” – 10 broad categories of care that many insurers must cover starting in 2014. But parents may not be required to buy it, the cost of the stand-alone dental coverage won’t count toward the amount of financial assistance a family could receive to purchase health insurance. And, if bought as a separate policy, the kids’ dental coverage will require payments in addition to those for medical coverage.  Advocates worry the added expense puts this out of reach for many parents. 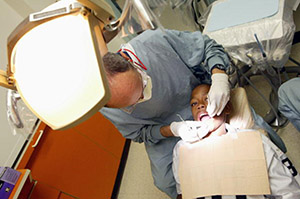 Dentist Edward Rothman performs a dental examination on eleven-year-old Ahmani Staten at a clinic in Oakland, Calif. in 2003 (Photo by Justin Sullivan/Getty Images).

“It’s going to be a game-changer for families,” said Meg Booth, director of policy at the Children’s Dental Health Project, one of dozens of groups that has pushed the federal government to change how the kids’ dental care provisions will work.

Under the health law, children’s dental coverage must be included in most health plans offered in the individual or small group insurance markets, or be available to consumers to purchase as supplemental policies. This requirement also applies to plans available through the health law’s new online marketplaces.

In federally run exchanges, or those in which states are partnering with the federal government, stand-alone dental policies can include out-of-pocket costs as high as $700 per child or $1,400 per family. (State-run exchanges can set their own “reasonable” out-of-pocket limits.) These expenses are in addition to what the families would pay for medical coverage.

Cardin says that requiring separate out-of-pocket costs for children’s dental care defies what lawmakers intended when they included dental coverage for children in the health law.

“Most families will not reach $700 a year in pediatric dental care. Why should they buy insurance, particularly if it’s not required?” he said at a Senate Finance Committee hearing in April. He says that the out-of-pocket maximum for dental services should be deducted from the out-of-pocket limits set for medical coverage so families don’t face an additional financial burden.

At the hearing, Department of Health and Human Services Secretary Kathleen Sebelius promised to review that matter, in particular “on what the impact would be on the very families we want to serve.”

An HHS spokeswoman said the agency is continuing to look into Cardin’s concerns.

According to the National Association of Dental Plans, about 57 percent of Americans have dental coverage, and 99 percent of those benefits are through plans purchased separately from medical insurance.

Chad Olson, director of government relations for Delta Dental, the nation’s largest provider of dental benefits, said that the vast majority of stand-alone dental plans now cover preventive care, such as exams and cleanings, at no charge, and that they plan to continue doing so under the new ACA coverage.

For plans sold on the federal exchanges, all medically necessary dental services are covered without cost-sharing once a family has spent — not including premiums — $700 in dental costs ($1,400 if there are two children or more). Families with children who have severe dental issues may find that number easier to reach than the out-of-pocket maximum for a family medical policy, which can be as high as $12,700 in 2014.

While dental cavities are largely preventable, they remain the most common chronic disease of children ages 6 to 11 and for adolescents ages 12 to 19, according to the Centers for Disease Control and Prevention. And untreated dental disease can be deadly. Deamonte Driver, a 12-year-old Maryland boy whose family lost its Medicaid coverage and could not afford dental care, died in 2007 after a tooth infection spread to his brain. The child’s death prompted Cardin and other lawmakers to improve dental coverage as part of the 2009 CHIP reauthorization, and to improve access to dental services under Medicaid.

In May, 46 groups, including Delta Dental and the Children’s Dental Health Project, asked Treasury Secretary Jacob Lew to allow the cost of stand-alone dental coverage to be part of the calculation that determines how large a tax credit a family could receive to help purchase coverage under the health law.

“Adding the cost of a stand-alone pediatric dental plan would raise the premium credit amount for many families, allowing them to afford dental care for their children,” the groups wrote.

While Cardin isn’t optimistic he can make any changes for the enrollment period beginning Oct. 1, he says he may be successful in the future. HHS has promised to monitor how many children receive dental care under the health law, how much they pay for it and how many medical plans include pediatric dental services, he added.

“We’re not going to give up on this issue,” Cardin said, adding that the administration is “on a questionable legal basis, so there may be some challenges, some legal issues here. We’ll see how it unfolds.”