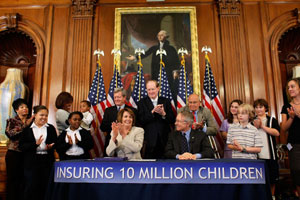 One of the staunchest backers of the Children’s Health Insurance Program, Sen. Jay Rockefeller isn’t ready to see it swallowed up by a new health insurance marketplace designed by Congress.

The West Virginia Democrat is a leading voice in a quietly waged debate over how best to provide health insurance to millions of children in low-income families. Rockefeller persuaded the Senate Finance Committee to maintain the program, known as CHIP, through 2019 as part of health legislation the panel approved last month. That provision was included in the Senate Democrats’ health plan unveiled Wednesday.

Rockefeller opposed earlier language in the Finance bill that would have ended CHIP after Sept. 30, 2013, when its current authorization ends, and moved those children to health insurance “exchanges” where private insurers and possibly a government-run plan would sell policies. The House health overhaul bill raises similar concerns for Rockefeller and some children’s groups. It would phase out the program at the end of 2013, moving some kids into a national exchange and placing others into Medicaid, the state-federal program for the poor.

The debate revolves in part around uncertainty over the coverage and costs of insurance that would be available through the exchanges. Some children’s advocates fear that the House health bill might result in less generous coverage than CHIP and require greater out-of-pocket spending by families. “As health reform moves forward, we need to make sure children can keep their CHIP coverage and not be forced into untested private coverage,” Rockefeller said earlier this month.

Jocelyn Guyer, co-executive director at the Center for Children and Families and a senior researcher at the Georgetown University Health Policy Institute, cites worries that the coverage sold in the exchange could be too expensive for some families. “I do think the potential fear that’s out there is that there are some kids with good coverage now who, because they are facing higher premiums and cost sharing, could actually end up uninsured,” she said.

But House Democrats  longtime supporters of CHIP themselves — say the bill includes safeguards concerning benefits and would provide more stable funding for children’s insurance. House Energy and Commerce Committee Chairman Henry Waxman, D-Calif., said while CHIP has been successful, “once health care reform is in place, however, the case for a separate program for children  one that excludes their parents  is less compelling.”

The insurance exchange will provide “solid coverage that is affordable for both low-income children and their parents,” Waxman continued. To minimize disruption, he said the House bill would allow children to remain in CHIP during the first year that the exchange is up and running and any problems are being resolved.

Much depends, analysts say, on how Congress decides to handle critical areas, such as who can qualify for Medicaid, what types of benefits must be covered for children and the level of subsidies given to help families purchase coverage in an exchange.

Lawmakers see the exchange as a specialized market where, initially, small businesses and people who don’t receive employer-provided coverage would choose among standardized benefits packages. More people and businesses could participate over time. Lower-income people would qualify for federal subsidies.

CHIP covers children whose family incomes are too high to qualify for Medicaid but too low to afford private insurance. Congress extended the program this year. Enrollment is expected to increase from an estimated 7.4 million in 2008 to more than 12 million in 2013, according to the Centers for Medicare and Medicaid Services.

According to preliminary estimates from the Urban Institute, about 60 percent of children in CHIP would, along with their parents, receive coverage in the exchanges. Children in families with incomes up to 150 percent of the federal poverty line  about $33,000 a year for a family of four — would go into an expanded Medicaid program. In addition, the House bill would require states that now cover CHIP children through their state Medicaid programs to continue to do so, regardless of a family’s income.

Proponents defend the House approach on three grounds. Transitioning CHIP kids into an exchange would allow entire families, many for the first time, to receive health coverage. Research has shown, when all members of families have health insurance children are more likely to receive health care services. Moving CHIP kids to the exchanges or to Medicaid also ensures a more stable source of funding than the CHIP program, which Congress would have to continue to reauthorize and fund. Budget pressures have caused some states to cap enrollment or cut benefits in their CHIP programs.

A Nov. 6 analysis by the left-leaning Center on Budget and Policy Priorities said that, as a capped federal block grant program, “in some years it (CHIP) may not provide sufficient funding nationally or adequate funding in individual states” to cover all children. The analysis also said states can limit enrollment or impose waiting lists if funding falls short.

Would Moving Kids Out Of CHIP Cost Parents More?

Addressing concerns about benefits, proponents say the House bill lays out steps to ensure that CHIP kids moved to the exchanges do not receive a lesser package. The Department of Health and Human Services would have to study the benefits and cost-sharing of CHIP programs and compare them with the benefits and cost-sharing that would be available in the exchange. By the end of 2011, the HHS secretary would have to make recommendations to Congress on how to make exchange coverage comparable to what the children received in CHIP and how to avoid any coverage interruptions as CHIP kids are moved into the exchanges. Congress would have two years to act.

Yet some children’s advocates say that the House language is significantly different from an earlier version of the bill that would have required the HHS secretary to certify that CHIP kids would have no loss of benefits before they were placed in the exchanges. While health insurers participating in the exchange are required to cover certain services, “we have no idea what type of amount, scope and duration limitations that those plans may impose,” said Bruce Lesley, president of the children’s health advocacy group First Focus. “When it comes to covered benefits, CHIP clearly goes beyond what the vast majority of commercial plans provide or what the health insurance exchange plans can be expected to provide in addressing the unique health care needs of children.”

A study First Focus released last month found that moving CHIP kids into exchanges would cause their families to pay more out of pocket for medical care. The analysis, done by the firm Watson Wyatt Worldwide, found that moving those children into health insurance exchanges could expose them and their families to anywhere from 5 percent to 35 percent in out-of-pocket costs. Cost-sharing would be higher under the Senate Finance Committee bill than under the House-passed bill.

If CHIP enrollees moved into exchanges face higher co-payments for doctor’s visits and prescriptions, their families might not enroll in the exchanges or use the benefits, said Stan Dorn, senior research associate at the Urban Institute. “The research in pretty clear: With low-income families if you charge more per visit people go without necessary services because they just can’t afford it,” Dorn said. “The benefits would be there in theory but not in reality because it’s not affordable to them.”

The Center on Budget and Policy Priorities Nov. 6 analysis concurs that for CHIP children moved into the health insurance exchange, the benefits packages would likely be somewhat less generous than what they receive in CHIP in a number of states and premiums and cost-sharing likely would be somewhat higher. But the analysis also states that total out-of-pocket health costs spending for those children’s families would generally decrease because their parents would be covered through the exchange.

In addition, the House bill would require health plans in the exchange and eventually all employer-sponsored plans to provide an essential benefits package that would include an array of services, including vision, hearing and dental care for children. And the subsidies provided to families with incomes of up to 400 percent of the federal poverty level — or $88,000 for a family of four — would be federally funded and not dependent on state funds or Congress acting to provide additional CHIP funding, the Center on Budget and Policy Priority’s report concludes.