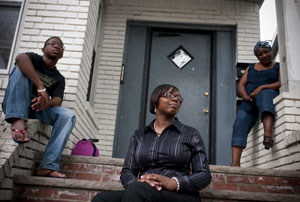 NEWARK, N.J.  Fourteen-year-old Prince Jackson made a fist and banged his hand on his head, again and again. “It was like this,” he said, trying to describe the blinding pain from the tumor growing inside his head. “It hurt so much. It wouldn’t stop.”

Jackson could not read or sleep or even watch television. Then he and his mother, who are Liberian refugees living in Newark, were visited by Shelia Walsh, a nurse from a local nonprofit program that helps seriously ill and dying children. “We helped him get the medicine he needed to reduce the swelling and the pain,” she said. “He was finally able to sleep through the night.”

Circle of Life Children’s Center stepped in earlier this year because public and private insurance plans generally do not cover hospice and palliative care services for seriously ill children who do not meet strict criteria, such as having just six months to live. Prince, for instance, has a good prognosis after receiving radiation treatment.

But changes are occurring. New models of care similar to hospice but not limited to children who are dying have emerged in a handful of states, and many more are moving in that direction. The programs provide services for a broader range of severely ill children, such as those with congenital defects, muscular dystrophy, HIV/AIDS, massive burns or serious brain damage from car accidents and near-drownings.

Medicaid, the state-federal health program for the poor and disabled, is paying for services in an increasing number of states, among them Florida, California and Colorado. States that obtain federal permission to use Medicaid funds must demonstrate that the programs won’t add to costs. While advocates insist these initiatives can save money, not everyone is convinced. In New Jersey, officials are not seeking Medicaid coverage because of “financial constraints,” a spokesman said.

“Hospice is a philosophy of community-based care that supports the entire family, medically, socially and spiritually,” said Lori Butterworth, co-director of the Children’s Hospice and Palliative Care Coalition in California. “We’ve created a new service model to meet the needs of children.”

Hospice was created with adult cancer patients in mind, and experts say the traditional approach does not work well for children, even when the prognosis is dire. “No parent will give up a chance to cure their children in order to get more services,” Butterworth said.

Private insurance programs generally follow the same rules as Medicaid and Medicare, the federal health program for the elderly and disabled, requiring a six-months-to-live diagnosis and no curative treatment. “But we are seeing a trend toward health plans looking for innovation in this area,” said Robert Zirkelbach, a spokesman for America’s Health Insurance Plans, a trade group in Washington.

“Some plans are allowing people on hospice to still get curative treatment. There’s been a lot of focus on improving communication to help informed decision-making before the end stages.”

Supporters say intensive support provided by the programs can reduce hospitalizations, trips to the emergency room and futile care at the end of life. Colorado’s program saves Medicaid $15,000 to $20,000 each year for each child by reducing emergency room visits and hospitalizations, according to Brian Greffe, medical director of the Butterfly Program, a pediatric palliative hospice care program at The Children’s Hospital in Denver. The family can call on a nurse to intervene before a problem leads to a trip to the emergency department, he said. In addition to savings, Greffe said children and their families benefit.

“You need someone to pull the whole picture together,” Greffe said. “Or you risk having a child die in the ICU instead of at home, or a child getting chemotherapy at the end when they don’t need it. The child’s death will be more peaceful and the family does better.”

The parents of Rihanna Leone faced wrenching decisions about treatment after she was born last year in Newark with birth complications, including severe brain damage. She could not eat and barely moved.

Circle of Life met the parents shortly after the birth. “We listened to the family,” Walsh said, “and helped them understand all that was going on.”

The parents eventually decided against further hospitalization or risky surgeries when they understood the outcome for Rihanna would not change. Circle of Life helped them take the baby home, where she briefly improved before dying in January at the age of five months. “We were happy with her those last two months,” said the child’s mother, Lilian Carchipulla.

Florida has the longest-running program, which began in 2005. It has served hundreds of children and won the support of a vast majority of parents, according to a study last November in the Journal of Palliative Care.

“Children don’t die when you expect,” said Charlotte Curtis, director of the Florida program. “Sometimes they leave sooner or they live for years. We found their needs were not being met.”

The financial impact on Medicaid is still being calculated, according to Ann Armstrong-Dailey, who is director of Children’s Hospice International and has been leading the efforts to create these programs. More than 20 states are in some stage of seeking permission for Medicaid coverage. Rep. Jim Moran, D-Va., has introduced legislation that would allow states to skip the lengthy approval process, which can take years.

Prince Jackson, meanwhile, is doing much better. Circle of Life has helped him and his mother, Kpenah obtain food and keep their electricity on. His most recent scans show no signs of the brain tumor.

“I remember I was afraid to go to sleep. That I’m going to die and not see the next day,” Jackson said in a soft voice. “I would keep praying to be brave.”

For Dying and Seriously Ill Children, Hope For Better Care