While many hospital CEOs worry about the sluggish economy and looming impact of the federal health law, executives at Children’s Memorial Hospital in Chicago confidently point to a future in which “the sky truly is the limit,” according to the hospital’s 2009 annual report. 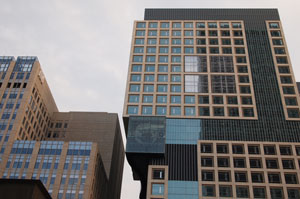 In keeping with their can-do attitude, they are building a towering new hospital just blocks from Lake Michigan in Chicago’s Streeterville neighborhood, adjacent to Northwestern University’s Feinberg School of Medicine.

Officials say the location, a few miles from their existing hospital in the Lincoln Park section of the city, will enable them to leverage world-class research, clinical care and technology, while recruiting more specialists and researchers through their training programs.

But with a price tag of $915 million, the new hospital ranks among the most expensive children’s facilities ever, costing the equivalent of $3.1 million for each of its 288 beds. One reason is the setting. The 23-story tower, slated to open next year, is being squeezed onto a 1.8 acre urban plot. The relatively small parcel has driven a vertical design that some say resembles a Lego stack, posing challenges for architects and builders while adding to the cost.

Two separate banks of elevators, one each for lower and higher floors; a sky lobby that cantilevers slightly over an alley, as well as complex mechanical, electrical and plumbing issues also added to the price tag. The new hospital will be 40 percent larger than the old hospital, with much of the new space devoted to research, according to a Chicago architectural website.

Children’s officials seem confident that the budget-stretching design won’t put them in a hole financially. One reason is a $100 million gift from local philanthropists Ann Lurie and her late husband, Robert. In return, the 129-year-old Children’s Memorial is being renamed the Ann & Robert H. Lurie Children’s Hospital of Chicago. The balance of the cost will come from additional fundraising, hospital funds and tax-exempt bonds.

Children’s Memorial traces its roots to an eight-bed cottage hospital founded in 1882. Over time, it has evolved into a major teaching and research hospital with millions in federal grants and 700 physicians. According to its most recent public filings, income climbed from $348 million in 2003 to $547 million in 2008. The hospital’s assets, meanwhile, grew by $1 billion, to $1.8 billion.

Like many other children’s hospitals, Children’s Memorial has shifted some of its focus to the suburbs as the city’s pediatric population has declined and the population of children in outlying counties has increased. In a 2004 bond filing, hospital officials wrote that they were targeting “Female consumers (age 18-45 years of age) with a college background and a household income of greater than $50,000” as part of their branding strategy.

Hospital officials declined to say how much free care they give away, but in a written statement said they have “very few requests for outright charity care.” In a 2007 report, they said they spent $3 million for charity care, or less than 1 percent of what they took in that year. They added that they spent $74 million on community benefits, including teaching, research and losses due to low Medicaid reimbursement rates.

Chicago: New Children’s Memorial Hospital Will Rank Among The Most Expensive