Executives at children’s hospitals like to say they provide a gentler kind of care. Their collegial environment prizes sharing, teaching and research over competition. Often, one large hospital enjoys a monopoly over care.

Then there is Denver, with two newly minted children’s hospitals costing nearly $1 billion. It offers another kind of model: freewheeling, competitive, expensive. 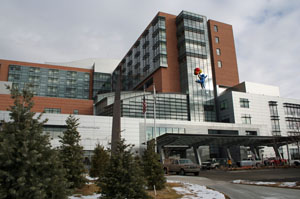 In 2007, Denver Children’s Hospital, which had long operated downtown, opened a $610 million replacement facility in suburban Aurora, about 10 miles away. The new, 9-story hospital was almost double the size of the old hospital and featured a four-story glass atrium and private rooms with 32-inch plasma televisions and on-demand movies and video games, among other amenities. In June, the hospital changed its name to Children’s Hospital Colorado. 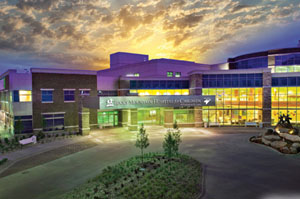 “We’re very collegial,” James Shmerling, CEO of Children’s Colorado, said in an interview. “We are competing but in a very collegial fashion.”

“I wouldn’t like to see this portrayed as a war,” said Rocky Mountain’s CEO, Mimi Roberson. “Jim Shmerling and I still talk. Is there communication? Yes and no.”

But if the two hospitals aren’t engaged in an outright battle, it is at least a sharp-elbowed skirmish. Shmerling publicly questioned the need for a second children’s hospital, writing in a December 2007 newsletter that Denver Children’s “already meets and surpasses the needs of children in the region.”

Not surprisingly, Roberson took exception, saying care at her hospital centered on patients, not teaching or research. “We offer a different model of care,” she said. “Ours is a private practice model. Our physicians prefer to focus all of their time on their patients instead of doing research.”

Shmerling said he was concerned that the much smaller Rocky Mountain Hospital for Children wouldn’t see enough patients to maintain the volumes necessary to ensure quality, especially for complicated procedures such as open heart surgery. He said research showed the Denver market could support a total of three pediatric open heart surgeons. Including two currently at Rocky Mountain, “there are now five.

Supply and demand can be a really good thing. But like anything else there is a point of diminishing returns,” he said.

“He’s not being very collegial,” countered Roberson. She said Shmerling’s hospital cancelled an agreement to share pediatric open heart surgeons after it moved to Aurora. As a result, Rocky Mountain went out and recruited two surgeons of its own from Dallas, Roberson said.

Colorado Children’s is located on a 227-acre campus that includes a medical school and research facilities. The land for its 304-bed hospital was donated. Since opening, business has been good. Admissions have exceeded expectations, while revenues and profits have spiked. In 2009, the hospital reported $69 million in operating income on $589 million in revenue – a nearly 12 percent margin, records show.

Now Colorado Children’s is spending $222 million to expand, building a 10-story addition to its Aurora hospital. The project will increase capacity to about 500 beds, officials said, making the facility among the largest children’s hospitals in the nation.

“We’re sort of the victims of our own success,” Shmerling said.

“Just as a market the size of Denver would not want to have just one hospital for acute adult care, we believe more than one option should also be available for children,” she said.