Many states have one or two large children’s hospitals. Then there is Ohio, with its growing number of seniors and shrinking children’s population. It has seven.

There are four large freestanding children’s hospitals in Akron, Cincinnati, Columbus and Dayton. In addition, the Cleveland Clinic operates a 114-bed children’s unit as part of its adult system. University Hospitals, also based in Cleveland, has its 244-bed Rainbow Babies and Children’s Hospital. Toledo Children’s Hospital, a 151-bed unit, is affiliated with Toledo Hospital. 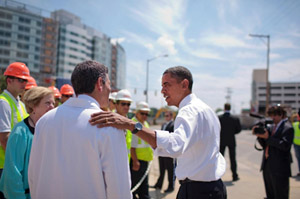 President Obama talks to people near a now completed Nationwide Children’s Hospital, on the left in the picture, in Columbus, Ohio in June 2010. President Obama touted the stimulus at the site that he said created jobs to improve the roads around the new hospital. (White House Photo by Chuck Kennedy).

All told, the seven children’s hospitals have more than 1,900 beds and revenues of about $3 billion annually, records show. Only Delaware, Rhode Island, South Dakota and the District of Columbia have more children’s hospital beds per capita than Ohio, according to industry and Census data. New York has double the number of children (4.4 million) as Ohio (2.7 million) yet about 400 fewer pediatric beds, according to industry figures.

The number of children in Ohio is shrinking at the same time children’s hospitals are expanding. Since 1970, the number of children under the age of 18 has plummeted by one million, to 2.7 million, according to Census data and the Ohio Department of Development. Children now account for 24 percent of the state’s 11.5 million residents, down from 35 percent in 1970.

There are no industry or government standards for what is an appropriate number of children’s hospital beds. Nationally, there is about one bed for every 2,490 children, industry data show. But the figures vary. Ohio has one bed for about every 1,426 children, which hospital officials contend is just right.

The Ohio Children’s Hospital Association did not respond to requests for comment. The group’s website notes that “Ohio is the only state in the nation with a flagship children’s hospital within two hours drive of every child.” That ensures easy access for even the rural parts of the state, according to the group.

But the shifting demographics inevitably raise questions about the duplication of costly services and technology, especially in older industrial areas such as Cleveland, where there are three large children’s hospitals within miles of one another. The city reported a sharp decline in overall population, while a number of surrounding counties reported shrinking or stagnant children’s populations, according to 2010 Census data. In contrast, the number of Ohio residents 65 or over is growing. Ohio ranks 15th nationally in the number of elderly, at 1.6 million, Census data show.

One area where the pediatric population is growing is Columbus, home to Nationwide Children’s Hospital. Formed more than a century ago, the hospital serves as the pediatric department for nearby Ohio State University. In 2007, it announced an $800-million expansion, with plans to build a 12-story patient tower scheduled to open next year.

In a press release, officials stressed the economic impact of the new hospital, noting that it would create 2,400 new hospital jobs and have a “positive economic impact in excess of $1 billion.” When completed, officials added, Nationwide “is expected to be the second-largest pediatric hospital and research center in America” with more than 500 beds.

Like other elite children’s hospitals, Nationwide is expanding its geographic reach “from across the country and increasingly the world.” In 2007, the hospital treated 6,443 patients from out of state and 20 patients from other countries, according to a spokeswoman.

“Our challenge is broad and encompassing and to meet it we are investing across the board: the best doctors, best researchers, best staff, best facilities,” Nationwide CEO Steven J. Allen said at the time. “There is no shortcut to providing the best care to our children.”

The hospital is getting financial help from a variety of sources. In 2007, it announced a $50 million gift from a foundation associated with Columbus-based Nationwide Insurance. In return, the hospital agreed to change its name to Nationwide Children’s from Children’s Hospital of Columbus.

Nationwide also said that it would name its expanded emergency department for Abercrombie & Fitch, which pledged $10 million for its expansion. The announcement was criticized by some because of the clothing retailer’s edgy marketing campaigns targeting teenagers. Hospital officials responded that the gift was a “tangible commitment to the welfare of children.”

Ohio: Children’s Hospitals Expanded Even As Number Of Kids In State Declined