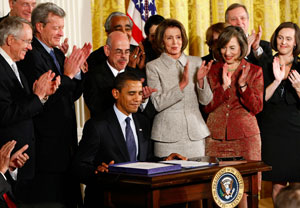 On Feb. 4, 2009, President Obama, surrounded by members of Congress, signed an extension of the Children’s Health Insurance Program, expanding health coverage for low-income children. It was the second bill the new president signed. (Win McNamee/Getty Images)

Just because Congress hasn’t passed a health overhaul bill doesn’t mean there hasn’t been any expansion of health coverage.

About 2.6 million previously uninsured children gained coverage last year in government health programs, according to a federal study released today. The gains came because the recession’s toll on families’ incomes and loss of employer provided health insurance made more children eligible for such programs. In addition, some states stepped up their recruitment efforts.

Health and Human Services Secretary Kathleen Sebelius on Thursday attributed much of the increase in enrollment in the programs to Congress last February reauthorizing CHIP, which gave states millions of new dollars to expand coverage and financial incentives to make it easier to enroll children.

“Most of these families would not have had the help without” the legislation, Sebelius said at an event at a Washington D.C. child care center.

But 5 million uninsured children who are eligible for the state-federal coverage programs are not enrolled.

To make it easier to get kids signed up for government health coverage, Sebelius has offered to allow states to tap into data on families who already qualify for food stamps.