WASHINGTON — For the first time, research shows that a pricey new medication called Repatha not only dramatically lowers LDL cholesterol, the “bad cholesterol,” it also reduces patients’ risk of dying or being hospitalized.

Repatha, a man-made antibody also known as evolocumab, cut the combined risk of heart attack, stroke and cardiovascular-related death in patients with heart disease by 20 percent, a finding that could lead more people to take the drug, according to a study presented Friday at a meeting of the American College of Cardiology.

Some doctors hailed the results as major progress against heart disease. In an editorial in The New England Journal of Medicine, Dr. Robin Dullaart, a researcher at the University of Groningen in the Netherlands, called it a landmark study.

Others said they expected more from the $14,000-a-year drug. It was approved in 2015 without evidence that it prevents heart attacks, simply because its cholesterol reductions were so dramatic and promising.

In the new study, patients with heart disease who combined Repatha with a statin, the most commonly used cholesterol medication, decreased their LDL from 92 milligrams per deciliter to 30. Doctors have rarely seen cholesterol levels that low. Many doctors wondered if such low levels would be dangerous, causing memory problems or dementia due to a lack of cholesterol, said Dr. Steven Nissen, chair of cardiovascular medicine at the Cleveland Clinic, who was not involved in the new research but has led clinical trials of PCSK9 inhibitors in the past.

Insurers have been reluctant to cover Repatha because of its price and uncertain benefits.

Insurance plans initially reject about 75% of all requests for Repatha, although they eventually approve half, said Dr. Joshua Ofman, senior vice president of global value and access at Amgen, the drug’s manufacturer. Doctors make an average of five requests before getting the medication approved.

In an unusual move aimed at increasing coverage, Amgen on Friday offered a special deal to insurance companies: If they loosen restrictions on coverage, Amgen will refund the medication cost should patients have a heart attack or stroke while taking it.

Although about 5% of patients in the clinical trial had a heart attack or stroke, rates of those problems could be two to three times higher in the real world, where patients are often older and sicker than those in clinical trials, Ofman said.

Why not just reduce the price of the drug and make it more broadly available?

The offer isn’t completely unprecedented. Geisinger Health System offers refunds to members who are dissatisfied with their care.

The offer is “a fig leaf covering a massive price,” said Dr. Peter Bach, director of the Center for Health Policy and Outcomes at Memorial Sloan Kettering Cancer Center in New York.

Insurance companies would lose money on the offer, Bach predicted, because they would have to pay to treat dozens of patients to prevent one heart attack or stroke.

“It sounds like the patient gets harmed and the payer has its financial risk reduced,” said cardiologist Cam Patterson, chief operating officer at NewYork-Presbyterian Hospital/Weill Cornell Medical Center, who wasn’t involved in the study. “Why not just reduce the price of the drug and make it more broadly available?”

Amgen may know that insurers are unlikely to accept their money-back guarantee, Patterson said. The offer gives them good publicity, however, and makes the company look as if it’s serious about tying payment to results.

The new study, which followed 27,000 patients for two years, found no safety risks.

While doctors said they were relieved that Repatha is safe, doctors such as David Rind said they had hoped the study would show that the injectable medication reduces heart attacks and other serious complications by 30 percent or more, given its success in early studies.

“This [result] is probably a little less than we had been hoping for,” said Rind, chief medical officer at the Boston-based Institute for Clinical and Economic Review, which evaluates drugs’ cost effectiveness. Rind also was not involved in the study.

The study’s author, Dr. Marc Sabatine, said the “compelling reductions” in heart attacks, strokes and death suggest doctors should treat cholesterol much more aggressively, aiming to lower LDL levels as much as possible. His study focused on patients with underlying heart disease, most of whom had already had a heart attack.

The standard treatment for cholesterol, other than diet and exercise, is a generic statin, which costs $250 a year. Statins can cut LDL levels by up to half and reduce heart attack risk by 25 percent, Nissen said.

Some doctors are less impressed with the new study, which was funded by Amgen. 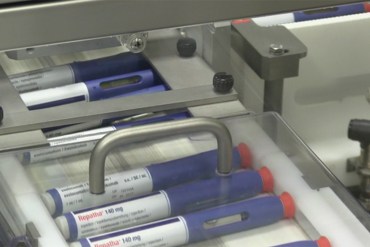 “It’s a small reduction for a super expensive drug,” said Dr. John Mandrola, a cardiologist at Baptist Health in Louisville, Ky., and chief cardiology correspondent for Medscape, who wasn’t involved in the study.

Repatha and Praluent, which belong to a class called PCSK9 inhibitors, are especially expensive because they would be taken for such a long time. Unlike an antibiotic, which patients take for a few days or weeks, those prescribed Repatha would take it for the rest of their lives.

Given its price, doctors aren’t likely to give Repatha to everyone with high cholesterol, Patterson said.

About 11 million Americans could be eligible for Repatha, according to Amgen. Repatha was approved for people with an inherited condition that causes high LDL levels or who have underlying heart disease but haven’t been able to adequately lower their LDL with statins alone. About 70 million Americans have high cholesterol and 25 million take statins, Nissen said.

Repatha could be an important drug for some high-risk patients, in spite of the cost, he said.

“It would be hard for me to look a patient in the eye, if they’ve had a couple of heart attacks and is scared to death, and say it’s not worth you taking this medication,” Nissen said.