Despite a surge in enrollment in the two weeks before the April 15 deadline to enroll for insurance under the health law, many more Californians have not signed up.

And they’re unlikely to. Many people are uninterested in health insurance, confused or skeptical. Here are some examples: 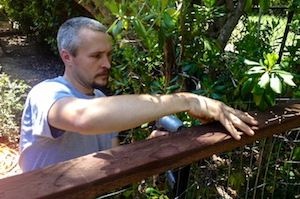 Scott Belsha from Long Beach, Calif., works as a drummer and carpenter. The 34-year-old has never had health insurance, not even as a child (Photo by Stephanie O’Neill/SCPR).

— Scott Belsha, from Long Beach, falls in the  “skeptical” category. “I’ve been consumed with living my life, and I’m fortunate to be healthy,” he says. He works as a musician and carpenter, and he’s never had health insurance — not even as a kid. His parents, who own a small business, always paid cash for medical care — most of which they were able to get from a doctor friend. He adds: “I haven’t ever been to the hospital or broken a bone. But I’m 34, and I should probably start thinking about it.”

— Steven Petersen, 40, of Los Angeles said he looked into his options, but couldn’t afford $240 a month, the lowest premium he could find. “My mom’s been calling every day saying, ‘You need to get health insurance,'” said Petersen, who manages a West Hollywood health store. “But I’m a pretty healthy guy, so I really don’t see the point of it because it’s so expensive.” He’d prefer a cheap catastrophic coverage plan, but those are only offered to consumers under 30 years old or people with hardship exemptions.

— Lorenzo Hebert, 47, of Los Angeles works at a Pasadena thrift store that doesn’t provide job-based health insurance to part-timers. He, too, says he’s shied away from buying insurance, mostly because he just hasn’t had time to figure out exactly what he’s supposed to do. “I’ve seen it on TV, but never had the time I could do it,” Hebert says.

Larry Levitt, senior vice president at the nonprofit Kaiser Family Foundation, said he wasn’t expecting every uninsured person to sign up during this first year. (Kaiser Health News is an editorially independent program of the foundation.)

“We’re really early on,” Levitt said. “The expectations are that enrollment will ramp up both in Medi-Cal and Covered California over a period of years.”

Under the health law, most people earning less than about $16,000 a year are eligible for low- or no-cost health insurance through Medi-Cal, the state’s Medicaid program. 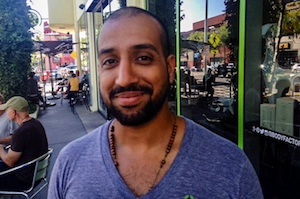 The Congressional Budget Office estimates that, even years from now, the number of uninsured will remain significant: about 30 million nationwide. Some portion will be those who live in states that have not opted to expand their Medicaid program to adults without dependent children; others will be immigrants who don’t qualify for coverage under the law. “But the biggest category are people who simply will choose either not to enroll in Medicaid or not to buy private insurance,” Levitt says.

-Beth Engel, in Ventura County,  knows the tax penalty for those who don’t have insurance would be much cheaper than paying for premiums. The 32-year-old mother of a nearly 3-year-old daughter, describes herself as among the early supporters of the ACA. “I was very hopeful” when the Affordable Care Act passed, she said. “I thought, ‘Wow! I can have a job that I love that doesn’t’ necessarily have insurance but I get insurance affordably.'” Engel, works part time as a hotel clerk and qualifies for tax subsidies that reduce premiums for her and her toddler to about $200 a month.

But she chose not to buy insurance for herself this year. “I found that the premiums were still very high, and I just couldn’t afford them,” says Engel.

Even though now she’s armed with the knowledge she can take the subsidy upfront in the form of a reduced insurance premium each month, she says she’s hesitant without thoroughly understanding the plans offered through the state-run marketplace, Covered California.

“Maybe I’m reading these incorrectly,” she said, “but it just didn’t make sense, and I thought I’m not going to put money I don’t really have to spend into a program that I don’t really understand.”

This story is part of a collaboration which includes Southern California Public Radio , NPR and Kaiser Health News.