The health insurance company Cigna signed a consent order with state regulators Thursday that will make some of its HIV/AIDS drugs more affordable for consumers in Florida signing up for coverage under the Affordable Care Act.

As part of its agreement with the Florida Office of Insurance Regulation, Cigna will cap the amount consumers pay for four popular HIV drugs — Atripla, Complera, Stribild and Fuzeon — at $200 per month. Previously the company asked consumers to pay a co-insurance of 40 to 50 percent of the drugs’ cost.

Cigna will also move generic HIV drugs from its most expensive specialty “tier” to a less expensive tier for generics. And it will no longer require consumers to seek “prior authorization” from the insurer to refill their prescriptions. 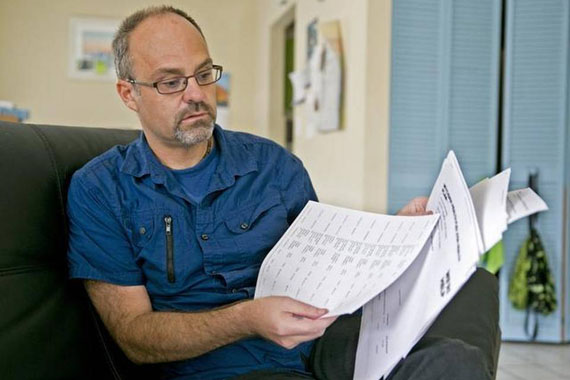 Tony Smith, who was diagnosed with HIV in 2008, is worried he may not be able to afford his medication costs under ACA coverage for 2015. Here Smith sorts through insurance papers at his home in Coral Springs on Oct. 22. (Photo by Al Diaz/Miami Herald)

The agreement said that Cigna had entered into the consent order, in part, to “avoid litigation.”

In May, two civil rights groups filed a complaint with the federal government accusing Cigna and three other Florida insurers of discriminating against people with HIV.

The complaint, lodged with the U.S. Department of Health and Human Services, said the four companies made lifesaving HIV drugs so expensive that they prevented consumers “from enrolling in those health plans — a practice which unlawfully discriminates on the basis of disability.”

Cigna denied all wrongdoing in the consent order, which also stated that Florida regulators made “no finding” about whether the company’s practices violated state or federal law.

In October, the Miami Herald wrote about fears among Floridians with HIV that they would not be able to afford prescriptions under plans offered on the federal marketplace for health insurance, which opens Nov. 15.

Carl Schmid, deputy executive director of the AIDS Institute, one of the groups that filed the federal complaint, called the agreement a “good first step,” but said it should have gone further.

“We’re glad that Cigna recognized they had problems with the way they designed their plans and how it affects people with HIV,” Schmid said.

But he added that the cap on out-of-pocket monthly expenses should have been expanded to include more drugs. Schmid also said that Cigna should offer customers a 90-day supply of its medications, rather than the minimum 30-day supply agreed to in the consent order.

Karen Eldred, a spokeswoman for Cigna, wrote in a statement to the Herald that the insurer had voluntarily agreed to the changes in order “to offer customers quality, affordable care.”

In the consent order, state regulators said they had been provided with a copy of that complaint, which also named CoventryOne, Humana and Preferred Medical as discriminating against people with HIV.

Amy Bogner, a spokeswoman for the state Office of Insurance Regulation, would not comment on whether it was negotiating consent orders with the other companies or planning to pursue litigation against them.

Cigna Agrees To Reduce Costs Of HIV/AIDS Drugs In Florida