At the Cleveland Clinic’s sprawling main campus, patient Morgan Clay is being discharged.

Clay arrived a couple of weeks ago suffering from complications related to acute heart failure. He’s ready to go home. But before Clay can leave, pharmacist Katie Greenlee stops by the room.

“What questions can I answer for you about the medicines?” Greenlee asks as she presents a folder of information about more than a dozen prescriptions Clay takes.

“I don’t have too many questions,” Clay says. “I’ve been on most of that stuff for a long time.” 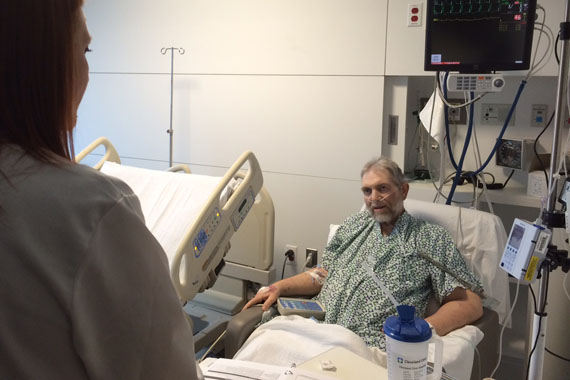 Cleveland Clinic Pharmacist Katie Greenlee talks with Morgan Clay about the correct way to take his prescriptions after being discharged. (Photo by Sarah Jane Tribble/WCPN)

Clay is 62 years old and has been on many of the medications since he was in his 20s, when he developed heart problems.

Still, Greenlee wants to make sure Clay understands the importance of taking his pills at the right time and at their full dosage. Not taking medicine correctly is a big reason patients return to the hospital. And research has found that as many as 30 percent of prescriptions are never filled.

Since the Cleveland Clinic began sending pharmacists into cardiovascular patient rooms at discharge, it has drastically reduced its number of readmissions. And that means it has reduced its Medicare fines, mandated by the Affordable Care Act.

But this kind of success in the ACA’s readmissions program, now in its third year, has been hard to achieve for other Cleveland hospitals that serve more poor patients.

This month, the National Quality Forum began a two-year trial period that adjusts Medicare’s metrics to account for poorer patient populations. NQF is a not-for-profit advisory group that works with federal regulators on the penalty metrics.

NQF’s Chief Scientific Officer Dr. Helen Burstin says one main question is being asked: “How much should these issues around socioeconomic status (and) poverty be considered as well for the readmission program?”

During the trial period, researchers will gather data on which penalty measurements are related to poverty and how they could be risk adjusted, Burstin says.

The key, Burstin says, is to understand which factors hospitals could be accountable for improving.

“So we would also like to begin to understand what’s underlying those differences,” Burstin says. “And, ultimately begin to understand which of those lend themselves towards improvement strategies, like making sure somebody does in fact have what they need to make sure they don’t bounce back into the hospital.”

Burstin says federal regulators at the Centers for Medicare and Medicaid Services are part of the discussions and “willing to participate in the trial going forward.”

Cleveland may be the perfect place to help answer this question.

On the near West Side of Cleveland, Dr. Alfred Connors is chief quality officer at county-owned MetroHealth System. About half of the hospital’s patients are uninsured or on Medicaid, which is government coverage for the poor and disabled.

“So we take care of people who are homeless, people who don’t have places to go when they leave, people who really don’t have family supports. They are living by themselves on a very limited income,” Connors says.

Unlike the Cleveland Clinic, MetroHealth has seen its Medicare fines increase since the program began in 2012. MetroHealth had a .83 percent cut in Medicare reimbursement for 2015, as compared with a .45 percent in 2013.

The Clinic’s main hospital is more likely to have privately insured patients, like Clay. Since 2013, the Clinic’s main campus has seen its penalty drop to .38 percent of Medicare payments from .74 percent.

There are several factors at play in the numbers. First, the maximum penalties increased to a 3 percent cut in Medicare funding in the fall of 2014. The penalty has ratcheted up from 1 percent when the program began.

In addition, federal regulators began tracking two new conditions. The penalties were originally based on readmissions of Medicare patients who went into the hospital with one of three conditions – heart attack, heart failure and pneumonia – and returned within 30 days. Now, federal regulators are also including readmissions for hip/knee replacement surgery and chronic obstructive pulmonary disease, or COPD.

“One of the real benefits of some of these programs that have come in place is it’s really put coordination of care on the map for patients,” Henderson says.

Leaders at Cleveland-area hospitals say that regardless of the amount of care and coaching a patient gets in the hospital, a patient’s home environment is critical.

University Hospitals – the city’s other big hospital system – also serves a high proportion of low-income patients at its main campuses. It reported a .59 percent penalty in Medicare reimbursements for 2015 up from a .11 percent hit in 2013.

Dr. William Annable, chief quality officer at University Hospitals, is skeptical about the program and its penalties: “There are some people in the health care industry who see it as the government trying to solve society’s problems on the back of the hospitals.”

This story is part of a partnership that includes WCPN/Ideastream, NPR and Kaiser Health News.