The disease nearly killed her last summer, and Solar, a 73-year-old grandmother, was rushed to the hospital by ambulance.

When Solar was discharged one week later, she received bad news: She would have to wait until March to see a doctor.

Waiting seven months for treatment would be unthinkable if Solar had cancer or heart disease. But Solar suffers from severe depression, and waiting that long for help is typical — and potentially dangerous.

Although San Antonio has earned widespread praise for its success in keeping people with mental illness out of jail, patients here routinely wait months to see psychiatrists, who are in short supply across the country. The number of available psychiatrists who specialize in the care of the elderly or children is even smaller.

Without routine medical care, patients like Solar, who tried to kill herself in August with an overdose of pills, can quickly deteriorate. Many return to the emergency room. Some don’t survive.

But Solar was luckier than most.

Emergency room staff made an appointment for her at a transitional care clinic at the University of Texas Health Science Center at San Antonio, which annually treats up to 1,500 patients with serious mental illness until they can find regular care. The clinic helps the mentally ill avoid winding up in the ER, where round-the-clock activity and confusion is ill-suited to the needs of patients who are already agitated, suicidal or psychotic.

Communities like San Antonio are increasingly focused on reducing emergency room use by people with mental illness. In addition to being chaotic, emergency rooms are among the most expensive places in the health system to get urgent care.

Patients like Solar end up in the ER because they can’t find care in the community, and emergency rooms can’t legally turn anyone away. The mentally ill can be stranded in the ER for hours, days or even weeks with minimal treatment, because doctors deem them too disabled to discharge, but can’t find them an inpatient psychiatric bed, which would allow patients to get more intensive care.

More than half of emergency room physicians said their local mental health system has gotten worse in the past year, according to a survey of 1,716 members of the American College of Emergency Physicians, released in October. Seventy-five percent of ER doctors said on their last shift, they saw at least one psychiatric patient who needed to be hospitalized.

The number of ER patients with a mental illness grew from 4.4 million in 2002 to 6.8 million in 2011, an increase of 55 percent, according to a 2016 study in Health Affairs. About 836,000 Americans a year go to the emergency room after harming themselves, according to the Centers for Disease Control and Prevention. Nearly 43,000 Americans committed suicide in 2014 — more than are killed annually in car accidents.

The American College of Emergency Physicians devoted much of its annual meeting in October to patients with psychiatric crises.

Everyone suffers when people with mental illness are stuck in limbo in the ER, Schmitz said. Other patients face longer waits for care and hospitals lose money. That’s because insurers pay emergency rooms only for their initial encounter with a patient, but not for time spent waiting for an inpatient bed.

“Every hour we are holding a psych patient,” Schmitz said, “is lost revenue that hospitals could be earning on other medical patients.” 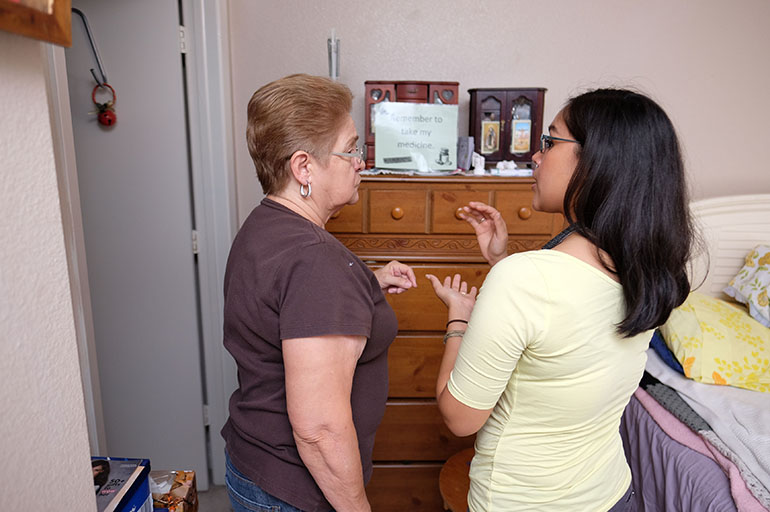 Cosgrove, right, helped Solar make a reminder to take her medication that Solar put on her dresser. (Bahram Mark Sobhani for KHN)

Solar’s story also shows the progress that people with mental illness can make when they receive prompt and comprehensive care. She has not returned to the ER since beginning treatment in August.

Hospital staff scheduled her appointment at the transitional care clinic through a web-based computer system before she left the hospital. Like most patients, Solar was seen within a few days.

Solar now meets regularly with a psychiatrist, who manages her medications, and a counselor to discuss her fears.

A therapist visits her at home to help organize her medications, which include pills for high blood pressure and cholesterol. The visits are paid for through a Medicaid pilot program, which allows staff to provide extra services for up to five patients who are considered “high utilizers” of health care, or patients who are particularly costly to insurers because of repeat trips to the hospital or ER, said Megan Fredrick, the clinic’s program manager.

Patients with serious mental illness, which can cause cognitive changes similar to dementia, often need help with day-to-day tasks, said psychologist Dawn Velligan, project director at the transitional care clinic. Therapists help patients set alarms that remind them when to take their medicines. They work with patients on calendars and organizational skills, so that clients don’t miss appointments.

Through a type of therapy called cognitive adaption training, clinic staff teach basic skills, such as how to shop for groceries or take the bus to a medical appointment, Velligan said.

Only 2.5 percent of psychiatric patients seen at the transitional care clinic return to the ER within three months, compared to 10 percent of patients who aren’t seen at the clinic, Fredrick said.

Without the clinic’s help, Solar said, she would probably have considered suicide again.

“Sometimes, I get pretty, pretty, pretty depressed,” said Solar, who was raised by an alcoholic father. Her depression began, Solar said, during an unhappy marriage.

Yet for years, Solar suffered in silence. The first time she saw a psychiatrist was after her August suicide attempt.

“For many of our elderly Hispanic patients, this is the first time they’ve seen a therapist,” Cynthia Sierra, a clinic counselor. “You’re raised not to talk about your problems with strangers … You can carry years of burdens and trauma.” 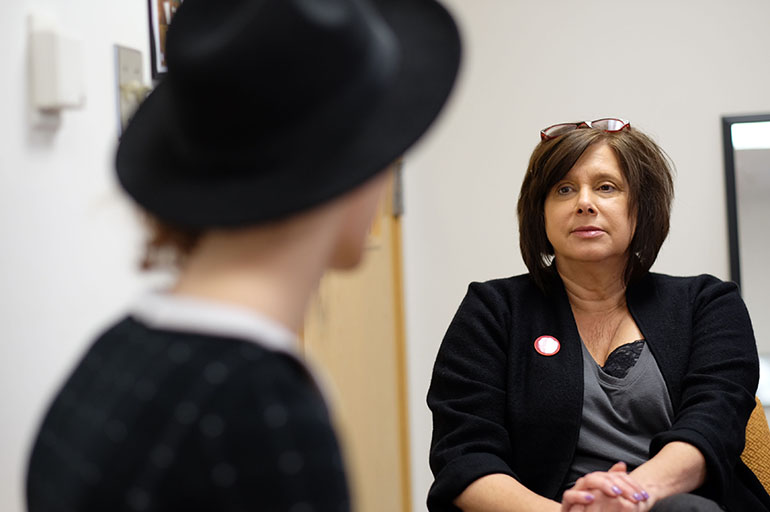 Psychologist Dawn Velligan talks to a client at the transitional care clinic, which aims to prevent people with mental illness from becoming so sick that they need to return to the hospital. (Bahram Mark Sobhani for KHN)

For all its success, the transitional care clinic can’t help everyone.

With an annual budget of $3.5 million — provided by a variety of grants and a fund for Medicaid demonstration projects — the clinic sees just a fraction of those who need help.

“We constantly have to beg for money,” Velligan said.

Although the transitional clinic accepts patients covered by Medicare, Medicaid or private insurance, it can’t accept most uninsured patients.

Psychiatrist Harsh Trivedi describes the program as a “Band-Aid” that fails to address the larger problem of inadequate care for people with mental illness.

Trivedi notes that the national shortage of psychiatrists means that even well-insured patients often have to wait for care. Although the overall number of physicians increased 14 percent from 2003 to 2013, the number of psychiatrists fell by 10 percent when adjusted for population growth, according to a July study in Health Affairs.

That shortage is projected to worsen over the next decade as large numbers of psychiatrists reach retirement age, said Trivedi, who is also the president and CEO of Sheppard Pratt Health System in Maryland.

Many psychiatrists have stopped taking insurance because health plans pay them too little to sustain a practice, Trivedi said.

“As a society, we’re OK with the fact that someone with depression isn’t able to get care,” Trivedi said. “That double standard allows some of our most vulnerable people to end up in harm’s way.”