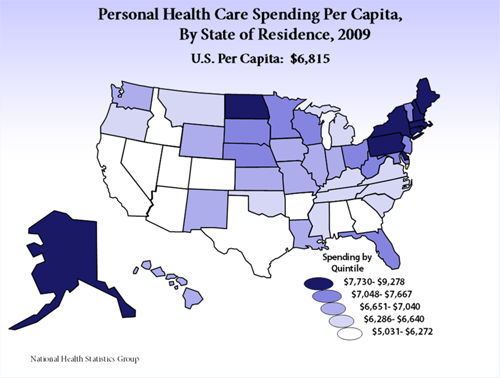 Researchers at the office of the actuary and the Centers for Medicare and Medicaid Services offered the first snapshot of state-by-state health-care spending since the recession Wednesday, as well as a look at where provisions of the 2010 health law could have their greatest effect.

The authors of the research article, published in Medicare and Medicaid Research Review, estimated per capita personal health spending for 2009 by state and found wide variation — from Utah’s 74 percent of the national average of $6,815 per person to Massachusetts’ 136 percent.

“We’re seeing a broadening of the gap” between higher- and lower-spending states, said Gigi Cuckler, a CMS economist and lead author, during a webcast by the Kaiser Family Foundation. (Kaiser Health News is an editorially independent program of the foundation.)

The analysis examined claims data from Medicare and Medicaid and extrapolated from that data to estimate overall spending. Researchers looked at “personal health spending,” which they defined as medical spending that excludes administrative costs.

States with the largest per capita Medicare spending tended to have more female and African-American enrollees. The Medicaid data, which are complicated because of variation in state eligibility requirements, showed the lowest per capita spending in states with lower personal income.

Slowdown in spending growth – largely because of the recession – varied across states, too. Many of the states experiencing the largest slowdown had the largest increases in unemployment in recent years.

While the authors do not offer recommendations for the future, it does note that lower-spending states, with their larger uninsured populations, will likely have the most people in 2014 ready to enroll in coverage through state insurance exchanges or the expansion of Medicaid.

This story has been updated to remove references to a government “report.” Instead, the information was published as a “research article.”