People in the market for health insurance in Oregon want to know what their out-of-pocket expenses will be — down to the dollar. They want doctors who reply to email. They want the option to see alternative practitioners. 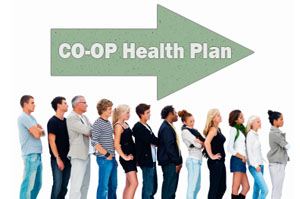 And of course, they want premiums that don’t burn holes through their pockets.

That’s what focus groups have told Oregon’s first consumer-owned and operated health plan. And that’s what the fledgling co-op is promising to deliver later this year when it begins enrolling its first members.

“If a member calls or emails their doctor, that’s going to cost 15 bucks – period,” said Dr. Ralph Prows, the chief executive officer. “If they go see a doctor, it’s a co-pay of 35 bucks — period. If they go to a specialist, it will be 70 bucks – period.”

This fall is the moment of truth for Oregon’s Health CO-OP and 23 other consumer-owned and run plans created by the Affordable Care Act to increase competition and give consumers a greater say in their coverage. Funded by $1.9 billion in low-interest federal loans, the co-ops were tucked into the law to mollify liberals who had unsuccessfully sought a so-called “public option,” or government-run insurance plan.

But will customers buy insurance from upstart nonprofits? And will the co-op plans be competitive with those offered by industry giants like UnitedHealthcare and Aetna which have the clout to exact big discounts from hospitals and doctor groups?

Four months before the opening of new online health insurance marketplaces where the plans will be sold, there are some positive early signs: Proposed premiums in Oregon – one of a number of states to publish preliminary figures – compare favorably to what commercial plans are charging. A single nonsmoking 40-year-old will be able to choose a basic policy for $234 a month from Oregon’s Health CO-OP, or $251 a month from Freelancers CO-OP, which will also operate in the state. Comparable plans from other companies will cost from $169 to $422 a month, state data show.

Critics had also questioned whether the co-ops could attract seasoned leadership, but among their CEOs are former state insurance commissioners Janie Miller of Kentucky and David Lyons of Iowa, former Baltimore health commissioner, Dr. Peter Beilenson, and other insurance insiders who left senior positions, said John Morrison, president and chief executive of the National Alliance of State Health Cooperatives, which was formed to support the co-ops.

“These are not babes in the woods,” he said. Many left secure jobs because they were “frustrated with the inefficiencies of the status quo and the unwillingness of the health insurance industry to accomplish real change on its own.”

Still, there is skepticism in some quarters, especially from commercial insurers who say co-ops have an unfair advantage with their low-interest loans. Some conservatives also question their viability.

These are the 24 groups that have been awarded co-op loans under the health law.

“They are basically starting new insurance companies from ground zero, and that’s very difficult,” said retired heart surgeon and health care analyst Roger Stark with the Washington Policy Center, a Seattle think tank that promotes free-market policies. ”I’m all for giving consumers a lot of choices, but most of these start-up loans come from taxpayers, and a lot is going to go to waste.”

Criticism of the program, combined with pressure to reduce federal spending, has already resulted in congressional budget deals that slashed its funding from $6 billion to $1.9 billion; instead of co-ops in all 50 states, only 24 got loans.

But despite the reduced funding and some stumbles – for instance, Vermont Health CO-OP’s initial licensing application was denied by that state — supporters say they’re confident many plans will succeed. With no shareholders to answer to, they say they enjoy certain advantages over commercial insurers: they are building plans from the ground up and hope to engage members as active partners in their care. They say the nonprofits can be more nimble than large companies, realigning payment incentives for doctors from the get-go, while keeping their operations lean and administrative costs low.

And the co-ops’ emphasis on primary care and member participation could potentially demonstrate new approaches to cost-effective care.

“They have the potential to be transformative,” said Wendell Potter, a former health insurance executive who writes on health issues.

Through the creation of online insurance marketplaces, moreover, they will have an opportunity for the first time to compete with large commercial insurers on an equal footing, said David Lyons, CEO of CoOportunity Health, a co-op in Iowa and Nebraska.

Lyons likens the marketplaces to food courts at the mall: “There’s McDonalds, Burger King, KFC, but also – with the same space and signage – there’s a Bob’s Sandwich Shop and a local ice cream store.

“The online insurance market –- the exchanges — are a game-changer,” he said.

The co-ops may also offer health plans to consumers outside of the marketplaces.

Each co-op is devising its own approach. In New Mexico, where diabetes is rampant, the co-op will pay community health workers to visit people in their homes, teach nutrition and diet basics and make sure they’re managing their chronic conditions so they don’t have flare-ups and end up in the hospital, said Dr. Martin Hickey, chief executive officer of New Mexico Health Connections.

While many pay lip service to this model, he said, not many execute it. “We’re small and flexible; we don’t need to move a million people in a new direction.”

Maryland’s Evergreen Health Cooperative will offer consumers the option of getting their care though a medical home model where providers work in teams with social workers, health coaches, social workers and care coordinators.

Physicians will be salaried, instead of being paid for each visit and procedure, which is how most doctors are still paid in the United States. They will be responsible for about half the 3,000 patients typically cared for by a primary care physician, and patients will be able to consult with outside specialists on the spot by skyping, said Beilenson, president and chief executive officer.

“The doctor can spend more time with the patients because she’s salaried and doesn’t need to churn through patients,” Beilenson said, adding that focus groups said that while the price of insurance is a priority, “it’s not the sole priority.”

“People want personalized care, and time with their doctor,” he said. “They want to be treated like a human being, not a number.”