They have rented offices and zero customers. All their capital is borrowed. They’re trying to sign the kind of expensive, chronically ill individuals  that insurers have avoided for decades. In three weeks they face mighty competitors with a hundred times the resources. 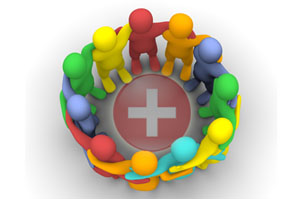 But the 24 insurance-company startups created by the Affordable Care Act say they’re ready to battle the establishment, stay in business and change health care.

Morrison and other co-op officials talked to reporters Wednesday while in Washington for a NASHCO meeting.

The health law designed co-ops to give competition to Blue Cross, Aetna, UnitedHealthcare and other commercial insurers. Private, nonprofit co-ops emerged as a compromise after Congress balked at establishing a government-run “public option” insurer.

Individuals and small employers will be able to buy co-op policies through the ACA’s online marketplaces — along with plans offered by other carriers — in the two dozen states where they do business. The marketplaces are scheduled to open Oct. 1. The original idea was to have a co-op in every state, but Congress cut startup funding.

“I’ve been on the job less than 365 days. We stood up an insurance company in less than 365 days,” said Janie Miller, CEO of Kentucky Health Cooperative. “We’re sort of in the eye of the hurricane right now. But it’s an exciting hurricane.”

Part of the excitement comes from trying to enroll members when co-ops aren’t allowed to use their federal startup loans for advertising. They’re trying to get the word out through community groups, clinics and hospitals.

“I feel pretty confident that we’re going to have tens of thousands of Iowans and Nebraskans going on the marketplace, and they’re going to see us,” said David Lyons, CEO of CoOpportunity Health, which will sell plans in both those states. “And they’re going to like what they see.”

Critical for co-ops is getting low hospital prices. As startups, they can’t promise hospitals high patient volume in return for discounts the way competitors can. Many co-ops are “renting” provider networks assembled by competitors, which limits the ability to negotiate.

“Pleasantly, almost across the board nationally, co-ops have been received with open arms by hospitals and doctors and providers of all kinds who welcome our influence in the market and who have given us great deals,” Morrison said.

But covering people with a habit of showing up repeatedly in hospital emergency departments poses large risks.

“A lot of systems have loyally uninsured people who come back over and over,” said Kathleen Oestreich, CEO of Meritus Health Partners, the Arizona co-op. “In exchange for network pricing concessions, we said, ‘We’ll design a product for your system, and we will work with you to… reach out to your historically uninsured.’”

“Old insurance was transactions and avoiding risk. That’s how you made money,” said Dr. Martin Hickey, CEO of New Mexico Health Connections. Now, he said, insurers need to “identify your high risk people, intervene with them… to stabilize their lives, to get them on the right meds and keep them out of the high-cost hospitals who are purely volume- and revenue driven.”

Co-ops also brag that they avoid the palatial headquarters, bureaucracy, clunky computers and high CEO salaries of their rivals.

Co-ops face skepticism from right and left. Republicans see the startup money as likely to be wasted and compare them to Solyndra, a taxpayer-backed solar-panel company that went bankrupt. Even backers of the health law believe co-ops face steep challenges.

But a July report from the Department of Health and Human Services’ inspector general gave a largely positive progress report. Co-ops claim they’re already doing their job of adding competition.

“In New Mexico I can tell you our presence drove the rates down substantially from where they were,” said Hickey. “We have the white hats on right now.”

Said Morrison: “If co-ops price their product right [and] get significant market share through the exchange, we will through our practices force the rest of the marketplace to change.”