Congress faces mounting pressure to decide the future of a popular but temporary health insurance subsidy program — and not just from unemployed Americans who would benefit.

Employers are anxious, too. Some say the subsidy, which pays 65 percent of the cost of a former worker’s COBRA health coverage for up to nine months, is another administrative and financial burden. But if lawmakers are going to extend it, they ought to do so soon, say executives such as Warren Salerno, employee benefits director at the Interpublic Group, an advertising and marketing company based in New York. Delays result “in additional costs to us, and it’s unfair to the ex-employee,” he says.

The program is beginning to expire: People who signed up when it began nine months ago saw their subsidy end Nov. 30. And the Dec. 31 deadline for enrolling is fast approaching. Bills introduced in the Senate and House would expand the benefit period to 15 months, and push back the deadline for signing up to June 30, which would help many who lose their jobs in 2010. On Tuesday, President Barack Obama said he wants it extended, but the Democrats have set no timetable for action.

For now, a growing number of people face a difficult choice as their subsidy ends: pay perhaps hundreds of dollars more every month, try to buy a cheaper policy with fewer benefits — or forego insurance.

Going without coverage isn’t a realistic option for Mark Breaux, 41, of Columbia, Md., who has epilepsy. His subsidy ended Nov. 30 and he has decided to keep the COBRA policy. But instead of paying $128 a month, he’ll write a check for $393. Breaux, who worked for a local nonprofit until November 2008, says finding another policy that covers his condition “would cost $600 to $800 a month, with a very high deductible.”

Federal law  COBRA is the shorthand — requires employers to offer insurance to laid-off workers for as long as 18 months. But participants generally bear the full cost, not just the share they paid as employees. As a result, most people either don’t elect COBRA coverage or drop it after a few months.

Without the subsidy, COBRA coverage consumes 83 percent of the average unemployment check, according to Families USA, a consumer advocacy organization. Most people who lose the subsidy will become uninsured because of that high cost, predicts Ron Pollack, the group’s executive director.

There’s no question the subsidy program has been popular. A survey by the benefits consulting firm Hewitt Associates found that the percentage of laid-off workers who elect COBRA has doubled to 38 percent from 19 percent since the subsidy program began.

The numbers might even be higher were it not for glitches in the subsidy program. Some people aren’t informed when they get their layoff notice. Federal and state officials say the problems are worse at smaller firms. Although COBRA applies to businesses with a workforce of 20 or more, most states have a “mini-COBRA” law allowing businesses with fewer than 20 employees to offer coverage at the same rates to laid-off workers.

When Vicky Boyce was laid off in September from a small real estate firm, she feared that she would go months without a job  and months without health insurance. No one alerted her to the subsidy. “I had no idea,” says Boyce, 48, who lives in Marietta, Ga., with her two children. But a friend recently told her about the program, and she quickly signed up.

Employers aren’t necessarily to blame. In Georgia, says Michael Wardrip of the Georgia Association of Health Underwriters, “I don’t think any of the insurers were going out of their way” to notify employers of the new law.

Officials in other states report similar problems. Says Ron Frederickson of the Oregon Insurance Division: “We had issues where people said they weren’t notified.”

Workers encounter other roadblocks as well. If a firm goes out of business entirely, so does its health plan, and any opportunity for COBRA coverage. Steve Dixon, 39, of Portland, Ore., says because of the demise of the nonprofit he worked for which, ironically, promoted health reform in the state -he is uninsured.

Some people can’t afford even subsidized insurance. Terry Vetaw of Minneapolis, 51, was laid off in October 2008 from her service technician job. She works part time as a restaurant cashier and receives unemployment. With rent and car payments, she says she can’t afford the more than $200 a month it would cost to keep her former policy: “I don’t have enough to pay all my bills.”

Vetaw must cope with various health ailments  among other things, she takes medication for high blood pressure  without insurance. “The older you get, the worse things get,” she says. “I’m at the age when things start breaking down.”

Employers say the subsidy program created administrative and other costs for them. It rolled out quickly  “lightning fast,” says Karen Frost, a Hewitt executive — and benefits managers had to scramble. Salerno , the benefits manager at the Interpublic Group, which has 20,000 U.S. employees, says there was immediate confusion over who qualified. Yet the company had just a few weeks to comply with federal guidelines and also deal with a retroactive provision, which enabled workers laid off from September of last year onward to qualify for the discounted insurance. 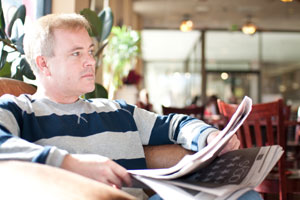 Mark Breaux , says finding another policy “would cost $600 to $800 a month, with a very high deductible.” (Chris Zimmer/KHN)

Prior to the subsidy, Salerno says, 20 percent to 25 percent of laid-off workers at the company continued their insurance under COBRA. “We’re running close to 50 percent now,” he says.

Benefits experts say COBRA also drives up costs because the people who use it often have significant health issues, making them more expensive to insure. Older people, especially those with health conditions, may not have much choice because the private insurance market likely would charge them higher rates for individual policies  if they can obtain coverage at all.

Some businesses have another financial concern: Firms with 20 or more employees now must pay the federal subsidy  65 percent of the premium  upfront to the insurance company, then wait to recoup the money through a lower federal tax bill.

“It becomes a real cash flow problem for a business,” says Bill Rys, tax counsel for the National Federation of Independent Business. “Some say it’s tough to make the payment.”

Some in Congress want to do more than extend the existing program. Democratic Sens. Sherrod Brown of Ohio and Robert Casey Jr. of Pennsylvania have introduced legislation that would increase the current COBRA premium assistance from 65 percent to 75 percent of workers’ premiums, increase the subsidy period from nine to 15 months and extend the eligibility deadline to June 30. Workers whose hours have been cut significantly, causing them to no longer be eligible for employer-sponsored health benefits, also could get the subsidy.

Among those who would benefit is Jerry Kemberling, 63, of Lawrence, Kan., who was laid off in February from a hydraulics equipment manufacturer and took advantage of the subsidy. But when it ended Nov. 30, he and his wife, Sondra, faced a huge spike in the cost of insurance  from $368 a month to $1,039.

Passing a subsidy extension, he says, “would be a tremendous help to a lot of us out here.”