Laura C. Trueman has spent much of her career promoting affordable health care.  Now, she wishes she could find some herself.

Laid off from her marketing job at a managed-care company late last year, Trueman was able to keep her health insurance thanks to a provision in the federal stimulus bill that gave furloughed workers the right to purchase their old employer-based coverage at a 65% discount.  The subsidies, which last up to nine months, were designed to give workers like Trueman time to get back on their feet.

Today, with the job market weak, Trueman is still without a job, and her family is bracing for an uncertain future. With the subsidies, she and her husband, a self-employed attorney were paying a manageable $460 a month for their health insurance; starting Dec. 1, the cost jumps to $1,313.   They can ill afford the increase.  They’re already having trouble making their mortgage payment, and fear they might lose their Northern Virginia home.

“It has really made a huge difference for us,” she says of the insurance assistance, adding that the higher payment “would be a real stretch.”

Since 1985, a law known as COBRA has given laid off-workers the right to hold onto their employer-based health insurance for up to 18 months so long as they continue to pay the premiums, including payments that their employers used to make on their behalf.

How much?
Eligible individuals pay only 35 percent of the normal premiums. The remaining 65 percent is paid by the employer, which is reimbursed by the government through a payroll tax credit.

How long does it last?
Nine months.

Who qualifies?
Employees who are involuntarily terminated from Sept. 1, 2008, through Dec. 31, 2009, and who are eligible for continued coverage under the Consolidated Omnibus Budget Reconciliation Act of 1985 (COBRA). Individuals whose annual adjusted gross income exceeds $145,000 ($290,000 for joint filers) are not eligible.

What kind of coverage?
Employers must provide the same benefits as in your old group plan, although they can offer other plans as well.

How do I apply?
Your employer or its representative is required to give you notice that you may be eligible. You also have to attest in writing that you meet certain criteria. You will have 60 days after receiving the notice to make a decision whether to participate.

What if I have other insurance?
If you are eligible for other group health coverage (e.g., through a new employer’s plan, a spouse’s plan or through Medicare), you are not eligible for the premium reduction.

How can I get more information?
The Labor Department and the Internal Revenue Service have special Web pages with additional details.

In the past very few people could afford this option, but the government subsidies have changed that, and now enrollments appear to be growing sharply. Hewitt Associates, a Lincolnshire, Ill., consulting firm, recently estimated that the rate at which workers were opting for coverage under COBRA had doubled compared with pre-subsidy levels.

Although federal officials do not have figures on the number of people participating in the program, millions have been eligible. The law covers anyone laid off between Sept. 1 of last year and Dec. 31 of this year.

But with the first discounts having gone into effect March 1, many people are about to see the benefit expire, including many who remain unemployed. The Obama administration and some members of Congress are talking about  whether to extend the subsidy.  Some lawmakers aren’t enthused because of budget concerns, but backers say the subsidy is a crucial lifeline for people still hunting for jobs.

Just this week, Rep. Joe Sestak, D-Penn., introduced legislation that would extend from 9 to 15 months the total allowable time an unemployed worker and her family could receive the subsidized COBRA assistance. The legislation would also extend the subsidies to people laid off through June 30, 2010, widening the window of eligibility by six months. A third provision would give an extra six months of undiscounted COBRA coverage to people who were laid off early in 2008 before the subsidy law took effect.

“Federal subsidies for COBRA premiums are making insurance more affordable for millions of unemployed individuals and their families,” says Rep. Nita Lowey, a New York Democrat. “This is not the time for those who have lost their jobs to have to worry about an impending drastic increase in their health insurance costs. Congress should extend these subsidies so the number of uninsured does not grow even further.”

For now, the aid is helping a broad cross section of people with widely varying health and financial situations — from newly minted MBAs to older workers forced out of their jobs after exhausting their disability leave, among other reasons.

A Twitter account that tracks news and personal experiences with the subsidy has garnered scores of followers.

Out-of-work professionals are blogging about the issue for the Wall Street Journal.

“I can only be grateful that I am safeguarded by COBRA,” writes a furloughed operations manager at Bank of America, “and hope that I am employed and eligible for medical insurance through my new employer before my COBRA term ends.”

My own family got seven months of discounted coverage out of the program after I lost my job as a newspaper reporter last year. The savings: a cool $6,000.  While I am still looking for permanent work, my wife was recently able to find a job with benefits.  (The discounts end when you become eligible for other insurance, either directly or through your spouse.) 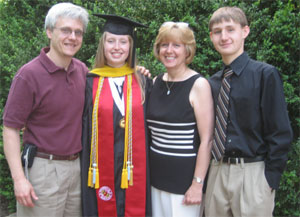 Rick Schmitt and his family.

People in the same boat seem to be everywhere. The firm my former company hired to administer the discount program was so flooded with work that it ended up hiring temporary workers  including one that I spoke with who had herself been recently laid off and was looking to take advantage of the subsidy.

But in many cases, the subsidies are, at best, only temporarily easing the stresses facing employees who have been laid off.

A joint study by the American Cancer Society and the Kaiser Family Foundation found that many chronically ill people could not even afford the subsidized premiums. (KHN is a program of the foundation.) Once the full COBRA premiums are reinstated, the study found, many cancer patients face becoming uninsured or forgoing needed treatments.

Indeed, people who become eligible for COBRA are generally older and sicker than the rest of the work force, and have fewer insurance options when they lose their jobs.

You can try to purchase insurance on your own, although that is generally more expensive than an employer-sponsored plan and often comes with limits on basic coverage such as maternity care or prescription drugs.   Some  but not all — states provide a backstop in the form of “high-risk pools” that offer insurance to people who can’t get coverage elsewhere because of their medical history.

Dale Gardner, who lost his job at a high-technology firm in Virginia last November, says the subsidies have been welcome.

At the same time, he says that he has been able to replace much of his lost income as a consultant, and that he would not mind paying full freight so long as he can keep his coverage under COBRA.  What worries him the most, he says, is that he won’t be able to find a job with benefits before his right to coverage under an even un-subsidized COBRA expires in 2010.

“Because of our health history,” he says, “coverage for my wife and I is going to be difficult to find at any price.” He says his wife has arthritis and one of his sons has asthma.

“I count myself as fortunate,” he adds. “I have been able to maintain coverage despite the fact that my family has health problems. (But) there are a lot of people who cannot even get that who have worse health problems.”

Some experts say those problems point up the need for broader-based reform of the health-care system.  The subsidies have been “a valuable first step” helping people in need keep their insurance, says Karyn Schwartz, a health-policy analyst at the Kaiser Family Foundation.  “Providing security for all of those who need health insurance will require more comprehensive reform,” Schwartz adds.

Trueman, 51, was laid off in December 2008, after working a year at a unit of UnitedHealth Group that provides managed care for Medicaid enrollees in 20 states.  Before that, she was the executive director of the Coalition for Affordable Health Coverage, a Washington-based industry advocacy group.

With her background in health policy, she figured getting a new job would be “relatively quick and painless.” But that has not been the case. “I have had a lot of interviews,” she says, “but just clinching the right one has not happened.”

Down the road, she worries most about a son in college who has a chronic health condition that requires medication. That could make it hard for the whole family to find insurance in the private market. Another problem is that her home state of Virginia is one that does not have a public program for “high-risk” individuals.

Seeking to exhaust all options, she has lately been reading up on how some drug companies give discounts to the poor or uninsured, to see if her son might qualify.

Come December, when the COBRA discounts expire, “I don’t really know what we will do,” Trueman says. “I hope we have a job by then that has health insurance.”