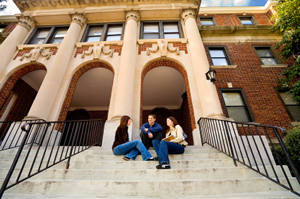 Aaron Smith is learning the hard way that student health insurance has limits. After breaking his wrist snowboarding in 2008 and twisting his knee playing soccer last year, the 28-year-old Georgetown University law student racked up $925.69 in medical bills, his share of the cost under Georgetown’s UnitedHealthcare student health plan.

Smith, who also heads up the Young Invincibles, an advocacy organization that aims to protect the health-care interests of young adults, says his experience is not unusual for people in that age group. “These kind of accidents do happen,” he says.

The new health overhaul law is expected to help a lot of young people, whether students or not. One widely publicized provision taking effect in October will allow young adults to stay on their parents’ health insurance until age 26. Many insurers have said they’ll implement it in time for students graduating this spring.

But for students who, like Smith, are older than 26, and for those who can’t take advantage of the law because their parents don’t have coverage or for other reasons, student health plans may be the only option. And unfortunately, many college plans offer limited protection, even for this generally healthy group. “Sixty percent of the plans out there are pure junk,” says Stephen Beckley, a health-care management consultant for colleges and universities who’s based in Fort Collins, Colo.

In some important ways, the new law has the potential to stiffen the backbone of student plans. Starting in October, all health plans, including college ones, must eliminate lifetime limits on coverage and most annual limits as well. The law also requires health plans to spend 80 to 85 percent of the premiums they collect on clinical services and quality measures starting next year, or give consumers a rebate.

More From This Series: Insuring Your Health

It can’t happen soon enough. Insurance plans don’t typically limit coverage for particular conditions, and most have maximum coverage limits overall of $1 million or more. But a Government Accountability Office report found that nearly all of the 194 student plans reviewed had maximum benefit limits, mostly on a per-condition basis; and the typical plan paid a maximum lifetime benefit of $25,000 per illness or injury.

For Gillian Mason, enrolled in the combined master’s/PhD program in American studies at Boston University, the $2,000 annual limit on prescription drug coverage in her Aetna student plan is an ongoing problem. Now 30, Mason arrived at BU in 2001. Suffering from cyclic vomiting syndrome, “I burned through that drug cap by March or April of every year,” she says.

Now, though her condition is under control, Mason says she still spends at least $1,000 out-of-pocket annually for drugs. A university spokesman says that this year she could have upgraded her coverage to an overall policy limit of $500,000 a year, including drugs, for an additional $623.

All students should carefully evaluate their school plans and compare them to other options. Look at the deductible and out-of-pocket spending limits to understand how much you may owe in addition to premiums, says Sara Collins, vice president of the Commonwealth Fund, a health-care research group. It’s also a good idea to eyeball specifics that often affect young adults, including emergency care, maternity coverage and mental health benefits, she says.

The extent to which the health law forces further changes to student plans will depend in large part on how the plans are defined by federal regulators, say health policy experts. Starting in 2014, individual plans will have to offer a comprehensive package of “essential health benefits.” Large-group plans, however, won’t have to meet that requirement. “The statute doesn’t recognize non-employer group plans,” says Timothy Jost, a law professor at Washington and Lee University.

Georgetown law student Smith says he’s encouraged that the health law will give students like him more options. They may qualify for the expanded state-federal Medicaid program for the poor. Alternatively, they could buy health insurance on the new state-based exchanges starting in 2014.

When that happens, “it could marginalize the college plans,” he says. Or maybe they’ll become better plans. Either way, students are likely to come out ahead.

This is a weekly column covering consumer questions about the new health law. If you have questions or ideas for future topics, please email us: