Miranda Dale had her first breakdown during her freshman year at the University of Virginia in Charlottesville. It was 2 a.m. on a Saturday, and she hadn’t left her dorm room in days.

“I honestly didn’t know what to do,” says Dale. “I heard rumors that at a big university you’re just a number and you’re not going to get through to anyone” at the university counseling center.

But when she called the school’s counseling line, someone answered right away. Dale got help getting a prescription for medication, and she was booked for an appointment that Monday. She was eventually diagnosed with bipolar II, a mood disorder that usually requires medication. 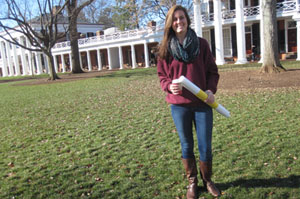 Meredith Was, co-president of the University of Virginia chapter of Active Minds, began seeing a counselor on campus at the beginning of her senior year to help her deal with the uncertainty of graduation and a bad breakup (Photo by Jenny Gold/KHN).

Over the past decade, colleges and universities across the country have seen an influx of students like Dale with mental health needs. The stigma of mental illness has started to dissipate, and more students are comfortable seeking help. In addition, teenagers with serious conditions are getting treatment earlier, and so a population of students that previously didn’t make it to college now arrives on campus each fall.

The average college counseling center sees about 10 percent of the student body each year.

Some campuses are exploring new systems to help meet the growing demand. At UVA, for example, the counseling center uses a triage system to make sure it is able to see as many students as possible.

When students first call the counseling line, they are given a 20-minute phone consultation with a therapist on their sleeping and eating habits, attendance, substance use, and whether they’re having thoughts of self-harm. That’s according to psychologist Russ Federman, former director of the UVA counseling center.

Students in crisis are seen immediately. Another quarter of callers are referred to off-campus therapists right away. Dale was seen only once at the counseling center. After her initial appointment, she was referred to a private therapist off-campus instead.

With the help of the triage system, the UVA counseling center was able to accommodate 9,000 visits last year with only 12 full-time therapists.

Overall, schools are getting better at meeting the mental health needs of their students, says Alison Malmon, president and founder of Active Minds, a mental health advocacy group with chapters on campuses across the country.

“Not everything is great; we would love all students to be able to get all of the unlimited visits they could get on campus,” Malmon says.

Recently, anxiety outpaced depression as the No. 1 student complaint on college campuses, according to a survey of college counseling centers. Malmon says that has a lot to do with the current economy.

Meredith Was, who heads up the Active Minds chapter at UVA, says she started to feel the stress of getting a job after graduation during the first semester of her senior year.

Was saw a counselor for just seven sessions, enough to help her deal with the uncertainty of graduation, along with a painful breakup.

Between suicide prevention outreach, free counseling sessions and the triage system, UVA manages to mostly stay ahead of the demand for services.

“We really want students to know it’s OK to reach out for help, and there’s no shame in having anxiety or depression or anything,” says Federman. “It’s just part of the human condition.”

Especially, he adds, during the college years.