When Brian Hawthorne enrolled at George Washington University as a 23-year-old junior after two tours in Iraq, the former Army medic was unprepared for the adjustment.

“I felt like I was on another planet,” he said of his first semester in 2008. Hawthorne recalled feeling whipsawed by the abrupt transition of “going from an environment where people around you are dying every day and trying to kill you” to a campus where he was surrounded by people who didn’t know anyone in the military.

Academics provided no refuge. “I was very worried because I couldn’t concentrate,” said Hawthorne, who had graduated near the top of his Westchester County, N.Y., high school class. “I would read one page and forget what I’d just read.” In danger of flunking out, he sought help on campus and was referred to the Veterans Affairs Medical Center in the District, where doctors quickly diagnosed a mild traumatic brain injury caused by his proximity to bomb blasts.

Hawthorne’s experience is emblematic of the challenges — social, academic, psychological and medical — facing the rapidly growing population of veterans who are flocking to colleges around the country, and the health demands placed on the schools they are attending.

Propelled by the Post-9/11 GI Bill, which took effect in 2009, 2 million veterans, many of whom served in Iraq and Afghanistan, are eligible for generous benefits that can amount to a full scholarship. At George Mason University, Virginia’s largest public school with more than 32,000 students, for example, the number of veterans has almost doubled, from 840 in 2009 to 1,575 last spring.

As a result, colleges are contending with adjustment problems and serious disorders far different from those for which their staffs have been trained: traumatic brain injury; post-traumatic stress related to combat and often accompanied by depression and substance abuse; and military sexual trauma, as sexual abuse in the service is known.

Many counseling offices don’t have a veteran on staff, nor have their workers been trained in these issues, said Ted C. Bonar, a clinical psychologist at the Center for Deployment Psychology, part of the Uniformed Services University of the Health Sciences in Bethesda. “It can be tough for a civilian provider to understand what vets have gone through,” he said.

For some, the move from combat to campus is relatively seamless. Unlike the hostility that greeted Vietnam veterans on campuses in the 1960s and ’70s, the current generation of student veterans, a quarter of whom are women, has largely been met with polite acceptance. But many describe an arduous transition for which they — and the campuses absorbing them — are ill-prepared.

Some student veterans say they have little in common with their younger, more sheltered classmates whose concerns typically revolve around their social lives and separating from their parents. They describe feeling both conspicuous and isolated, put on the spot when they are singled out in class by well-meaning faculty members who solicit their views on foreign policy; turned off by the unstructured, sometimes frivolous, college atmosphere; and loath to admit they are having difficulty. Many mourn the absence of the close friendships and intense sense of mission that are often the glue of military life, particularly in a war zone.

“It’s lonely,” said Walter Sweeney, a 25-year-old freshman whose introduction to George Mason was orientation with 18-year-olds who didn’t know quite what to make of him. “I’ve been to war, and it’s a very maturing thing to go through,” Sweeney said, adding that trying to explain his six years in the Marines hunting pirates off the coast of Somalia and surviving heavy combat in Afghanistan is “like trying to describe sex to a virgin.”

The influx of veterans is straining already overtaxed mental health services on many campuses, experts say.

“There are more students presenting to college mental health centers year by year, and those students have more severe mental health issues at a time that budgets are shrinking and cost savings are being implemented,” said Chris Brownson, associate vice president of student affairs and director of the counseling and mental health center at the University of Texas at Austin. “It’s an incredibly challenging dilemma.”

Two recent studies underscore the magnitude of the problem. Researchers at the Rand Corp. estimate that nearly 20 percent of recent veterans reported depression or post-traumatic stress disorder, while 19 percent said they had suffered a traumatic brain injury. A study of 525 student veterans published last month and conducted with the help of the Student Veterans Association (SVA), a national advocacy group with chapters on 400 campuses, found that 46 percent had contemplated suicide, compared with 6 percent of nonmilitary students reported in a 2010 survey by the American College Health Association. Equally worrisome: 20 percent of the student vets had a suicide plan, which is regarded as an indication of intent.

“Many colleges aren’t aware of the issue, and many don’t even know how many student veterans they have on campus,” said the study’s lead author, David Rudd, scientific director of the National Center for Veterans Studies at the University of Utah. After the study was presented at the American Psychological Association convention in August, Rudd said, he received hundreds of phone calls from colleges around the country. “There is enormous interest, but we’re just so early in the process.”

Schools are responding in various ways.

GWU has established a veterans service office and plans to create a course to teach student veterans to provide support to their peers. On Veterans Day, UT-Austin opened a veterans center on campus whose staff will include a psychologist from the Department of Veterans Affairs. San Diego State has pioneered on-campus housing for veterans, who typically live off campus, in an effort to foster a sense of community.

Bonar, of the Center for Deployment Psychology, who was previously a psychologist at the University of Illinois, specializes in training college counselors to deal with student veterans; he has held sessions on more than two dozen campuses. 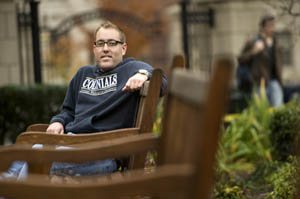 Scott Disney, president of the George Washington University chapter of the Student Veterans Association, comes into contact with veterans returning to college, some who suffer from PTSD and brain injury. (Photo by Linda Davidson/The Washington Post)

“What we’ve learned is that there’s no ‘one size fits all,’ ” said Iraq veteran Megan Krause, associate director of military programs for the American Council on Education, which represents the presidents and chancellors of more than 3,000 accredited schools, from two-year community colleges to Ivy League universities. “What a lot of our schools have said is it’s not about ‘going postal’ in the classroom; it’s more of a day-to-day reintegration and transition.”

The differences between regimented life in the military and the looser atmosphere on campus can be jarring, even overwhelming, veterans agree. “You’re used to getting up at 5:30 a.m. and doing PT [physical training], and at 9 a.m. kids are rolling into class in their pajamas, literally,” said Scott Disney, 28, a senior who served in Afghanistan and is president of GWU’s chapter of the SVA.

“You have a checklist for everything in the military,” said Jennifer Connors, an Air Force veteran who is director of military services at George Mason. “There is no checklist for Mason.”

Some veterans say they struggle with anger at their fellow students, particularly those who seem ignorant of the wider world and of the ways in which military service irrevocably changed the veterans’ lives.

“I tell [student veterans that] you can’t use up your energy being angry with people who haven’t had the same experience you have,” said Paul Tschudi, a Vietnam veteran and director of graduate programs in end-of-life care at GWU, who is faculty adviser to GW Veterans.

Frequently, he added, student veterans “want it both ways: [They] don’t want to be singled out, but want respect, and for people to know what they’ve been through.”

Veterans recoil at the question many say they have been asked at a party, during a date or even in class: Did you kill anybody?

Elizabeth O’Herrin, 27, who assembled bombs in Iraq and volunteered at a combat hospital where she saw “really terrible things,” remembers going home in tears after being grilled by a date while an undergraduate at the University of Wisconsin who seemed to regard her “as some sort of GI Jane. Sometimes when you go out, you don’t want to talk about it.”

The Perils Of Stigma

College mental health experts and veterans agree that a reluctance to seek help, a trait embedded in military culture, remains a major impediment.

The Defense Department is attempting to change that through the Real Warriors campaign, whose Web site highlights the experiences of veterans who faced psychological problems. Among them is the American Council on Education’s Krause, who was successfully treated for severe PTSD at a VA hospital three years ago, during her senior year at Penn State.

“We’re the biggest victims and the biggest promoters of stigma,” said Lucas Stalcup, a decorated Iraq war veteran who in 2008 co-founded the national SVA while an undergraduate at Columbia University. Stalcup, who earned a master’s degree from Georgetown’s School of Foreign Service, says he believes stigma is a more significant obstacle than a shortage of resources on campuses.

GWU’s Hawthorne says that student veterans resent the pervasive misconception that “we’re all scary and broken.” In his case a brain injury diagnosis was both a surprise and a relief: It provided an explanation for his academic problems, and treatment enabled him to get on with his life. Hawthorne learned new study techniques to cope with memory problems, switched his major from international affairs to geography because he was unable to learn Arabic, and graduated as planned in 2010. Now enrolled in a master’s degree program, he remains in the reserves, is engaged to be married and has a full-time job.