When Crawford Clay discovered blood on his shorts at the end a routine run in the spring of 2014, he did not know the stains were a symptom of a condition that also afflicted his family.

His doctor said it was likely hemorrhoids, but as a precaution, the physician scheduled a colonoscopy.

The exam revealed Clay had rectal cancer. He was 43, seven years younger than the recommended age for colon screenings and completely in the dark about the symptoms associated with the condition. Clay didn’t know that his grandfather had the disease or that he would be diagnosed in the same week as his dad.

Clay is not the only person caught unawares by this diagnosis.

Authors of a research letter published Tuesday in JAMA found that rates of colorectal cancer among adults under age 55 and the number of deaths among that age group are rising. They also discovered some surprising demographic trends. The number of whites being diagnosed with colorectal cancer and their mortality rates are rising, even as blacks are seeing a decline in both categories. Despite those declines, however, blacks still have higher rates of death from the disease, the study found.

Researchers studied rates of colorectal cancer and deaths for individuals aged 20 to 54 from 1970 through 2014, using data from the National Center for Health Statistics. NCHS uses death certificates reported by every state and the District of Columbia to gather this information. 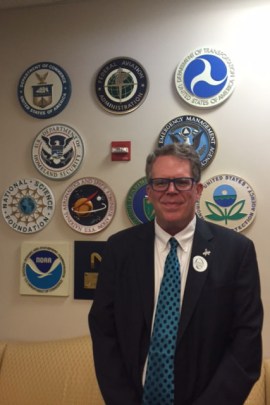 Crawford Clay, from Macon, Ga., was diagnosed with colorectal cancer at age 43. He has lobbied on Capitol Hill to raise awareness for patient access to treatment. (Courtesy of Crawford Clay/Colon Cancer Alliance)

Rebecca Siegel, an epidemiologist at the American Cancer Society and lead author of the letter, said these findings suggest the increasing tally of people dying from colorectal cancer is not just because extra screening is verifying more cases. While the steady uptick in deaths is small — 1 percent annually from 2004 to 2014 — the rising mortality rates are occurring in what is supposed to be a healthy population.

“It tells us that not only is this a true increase in disease incidence,” she said, “… but this increase is enough to outweigh the survival in all age groups because of better treatment.”

Siegel said the data do not match up with risk factors of colorectal cancer, such as obesity. Whites and blacks have comparable rates of overweight individuals, but the diverging patterns in deaths due to colorectal cancer suggests that obesity may not play as large of a factor as previously thought.

“Why we have an increase of deaths in whites is an unanswered question at this point,” she said.

Colorectal cancer is the second leading cause of cancer-related death among men and the third leading among women, according to the American Cancer Society. An estimated 135,000 people are expected to develop colon or rectal cancer this year and 50,000 people die of it annually.

If caught early, the likelihood of surviving the condition is high. More than 9 out of 10 people with stage 1 colorectal cancer — which means the cancer has not spread to distant sites or the lymph nodes — are as likely to live five years after their diagnosis as a person who doesn’t have cancer, according to the American Cancer Society. However, only 11 percent of those diagnosed with stage 4 cancer that has spread to other parts of the body have the same odds.

Unfortunately, these late-stage cancers are appearing in younger patients, said Andrea Cercek, a medical oncologist who specializes in the treatment of patients with gastrointestinal cancers at Memorial Sloan Kettering Cancer Center in New York City. Her patients with colorectal cancer are on average 50 years old. Guidelines recommend individuals begin regular colonoscopies at that age, but Cercek said many of her patients with the condition are far younger.

“We really don’t know yet why this is happening,” she said.

The rising number of cancer cases among young people pose new challenges for providers in supporting their patients after they survive the condition, Cercek said. The aggressive treatments used to beat the disease have side effects that were not relevant for older patients, such as infertility issues.

“It’s not so much that we’re taking a step back,” Cercek said. “It’s just that it’s a new problem that we have to tackle.”

Today, Clay said, his cancer is in remission. Now 56, he works as a certified patient and family support navigator for the Colon Cancer Alliance, an advocacy group that promotes research and patient services for those affected by the disease.

Clay said he finds that many of the families he helps lack the knowledge needed to navigate a diagnosis. Doctors can help tackle the problem by avoiding jargon and communicating more clearly. Although his recovery and work educated him on colorectal cancer, he remembers what it felt like to be caught off guard.

“He knows what he said,” Clay said in reference to a doctor. “And now I know. But, God help me, I didn’t know back then.”