Unlike other states still wrestling over new provisions of the health law, Colorado is moving forward with broad consensus on the minimum level of health coverage people will be required to carry beginning in 2014. 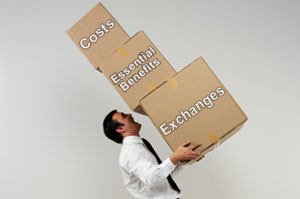 States have until Oct. 1 to submit an “Essential Health Benefits” plan to the federal government. The plans will set the floor for the amount and types of coverage that must be available in new insurance exchanges serving the individual and small group markets when the individual mandate kicks in in 2014.  States that don’t choose their own benchmarks will have them set by the federal government. Colorado is expected to report its choice soon, after arriving at it collaboratively and with no real conflict.

Colorado is working harder than most states to meet deadlines under the Affordable Care Act. At the same time, it insists on as much independence as possible in implementing the law. Seeking “Colorado-specific solutions” is actually codified in the bipartisan bill passed last year to establish a state health insurance exchange.

To pick its benchmark plan, Colorado formed a working group that included Gov. John Hickenlooper, a Democrat, members of the state health exchange board, and its insurance commissioner. They compared the 10 existing plans the federal health law delineates as options, including the three biggest federal health plans offered in the state, the biggest HMO and six others. The working group sought out feedback from industry and consumer advocates and now looks ready to submit its choice to the federal Department of Health and Human Services without taking any kind of formal vote.

“If there’s broad agreement it will have been done by consensus, and no individual or division would have made that decision on their own,” said Colorado Insurance Commissioner Jim Riesberg.

Broad agreement appears to be holding up since the state announced its draft Essential Health Benefits plan at the end of August. Insurance plans and health interest groups have offered only minor tweaks. Even a prominent critic of the federal health care law involved in the decision, state Rep. Bob Gardner, a Republican, says the benchmark plan “was chosen in a rational way.”

For all the weeks-long process of webinars, meetings and two public comment periods, Colorado ended up picking the same plan that’s the federally-designated default for states. Those that don’t select benchmark plans on their own will use the largest small group plan in the state as their benchmarks.

The Kaiser Permanente plan that Colorado chose as its benchmark sells for about $4,200 a year, for a non-smoking, 40-year-old male in the Denver area. (Kaiser Health News is not affiliated with Kaiser Permanente.) Premiums vary by age, location, and smoking status. The plan meets most of the 10 criteria the health law sets for comprehensiveness, and covers state-specific coverage mandates, including for contraception and childhood autism. Now other companies know they’ll have to offer plans with at least that level of value, plus some additional federal requirements, to be able to sell in Colorado in 2012.

But don’t expect the Kaiser Permanente plan, or any of the others expected to match it in the market, to cost anything like what it sells for now. For one, the benchmark plan has to provide additional benefits mandated by the ACA, like yet-to-be-defined “habilitative services,” and pediatric dental and eye care. And, because the market for this kind of coverage is essentially brand new – the previously uninsured, many of whom are promised subsidies to help them buy health policies – insurance companies aren’t sure how much they’ll have to charge to cover expenses and still make a profit.

On the national level, America’s Health Insurance Plans, the insurance industry’s lobbying group, is pushing for a lower minimum of coverage, to keep prices down for consumers.

“The imposition of broader benefit packages than what consumers and small businesses are purchasing today will force consumers to ‘buy up’ [to] coverage that they may not want or need,” said Dan Durham, AHIP’s executive vice president, during a subcommittee hearing on Capitol Hill last week.

But insurers in Colorado don’t think the benchmark will be impossible to meet.

“I don’t see it as bringing plans into the market, but I don’t see it driving plans out, either,” says Neil Waldron, with the Colorado Association of Health Plans. “The market’s very competitive right now, most players will stay in.”

“I think they actually did a pretty good job,” says consumer advocate Dede de Percin. She favors the additional coverage required by the federal law, and says it should still be affordable.. “They chose the most popular plan. Under Kaiser it’s affordable now, and the exchange will increase competition.”

De Percin says the actual cost of the plan to the buyer will depend on their income, and whether it qualifies them for a subsidy to help buy insurance.

HHS is expected to approve Colorado’s benchmark plan in the coming weeks. Insurance companies in the state are now busily drawing up plans that will meet the benchmark, and trying to price them. Those price estimates are a closely guarded secret and won’t be released until this spring.

The number of Coloradans in the state’s individual and small group markets, those expected to either buy a benchmarked plan or pay a tax penalty, is estimated at just under a million people, about 20 percent of the state population.